It has been a good year for opponents of marijuana prohibition. Marijuana was legalized in Colorado and Washington State and there are encouraging signs that federal officials will not intervene. Groups in other U.S. states are already organizing ballot initiatives for 2014 and 2016, so legalization is likely to spread.  Are we finally reaching the tipping point that marijuana advocates have been working toward?

Proposals for marijuana law liberalization can be roughly placed into two categories.

Marijuana possession remains a criminal act everywhere in Canada, but in some provinces (including ours) the police rarely arrest people unless they are also guilty of more serious crimes. This “effective decriminalization” is evident in crime statistics. The chart below shows annual rates of criminal charges for marijuana per 100,000 people in Newfoundland and Labrador. 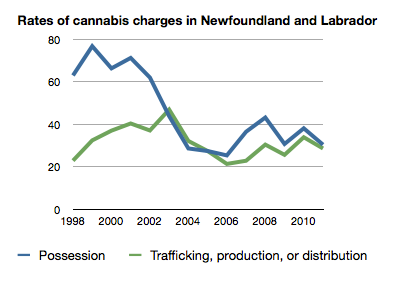 The rate for possession has been roughly equal to the rate for more serious crimes since 2003. Since those arrested for serious marijuana crimes are usually also charged with possession, this suggests that police have stopped charging for possession alone.  Unfortunately, the trend does not hold Canada-wide. 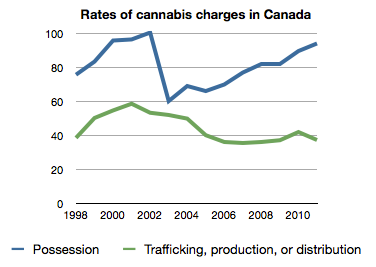 Across Canada possession charges dropped precipitously in 2003, but have increased  gradually ever since. This has an obvious political explanation. The former Liberal government tried to decriminalize cannabis in 2002 under Chretien and again in 2004 under Martin. The Conservative government came to power in 2006 and has maintained a hard line on drug crimes. Today about 20,000 people per year are arrested in Canada simply for possession of marijuana.

Marijuana laws are inconsistently applied across the country. Possession laws appear to be:

Public opinion and prospects for change

According to recent opinion polling (here and here) a majority of Americans now support marijuana legalization. Support is growing rapidly and if trends continue, we should expect two thirds support within a decade. Already, 72% of Americans agree that “government efforts to enforce marijuana laws cost more than they are worth” which can be read as support for decriminalization. With numbers like these, I predict that we will see decriminalization or legalization in the US at the federal level within 5 or 10 years, particularly if the next president is a Democrat.

Inevitability is no excuse for complacency

Even though marijuana legalization seems inevitable, it could conceivably be 20 years or more before government takes action.  In the meantime 20,000 people are facing criminal charges every year for something that only a shrinking minority think should be illegal. We are paying a large human and economic cost for a policy whose main “benefit” is a curtailment of personal liberty. Many people, myself included, consider marijuana to be a healthy and enriching part of life and it is demeaning and insulting to be declared a criminal for engaging in a private activity that is arguably no more harmful than drinking alcohol or smoking tobacco.

If you would like to express your support for the end of marijuana prohibition, you should check out the annual 420 rally taking place in Bannerman Park on April 20 at 4:20 p.m. I know I will be there.

Correction: An earlier version of this article stated that the leader of the Liberal party supports decriminalization and failed to account for Trudeau’s endorsement of legalization in February. We thank the commenter for pointing this out.

As Health Minister John Haggie declared, “the world has changed.” His colleagues in the Liberal cabinet

Council is back in socially-distant session at the Bunker, and it's as
Newfoundland & Labrador will be clawing back income support from anyone who
Up to now, an important aspect of Andrew Furey's recent professional life
Council is also moving to get space adjacent to Bannerman Park for
Despite the fanfare for their service, food retail employees themselves are not
Go to Top