The economy of Newfoundland and Labrador is going through a great transformation. The unemployment rate is the lowest it has been in 40 years, wages have grown from some of the lowest in Canada to being above the national average, and we were famously declared a “have province” – a phrase that remains contentious – five years ago.

But not everyone is sharing equally in this prosperity. I have dealt with two examples elsewhere: the boom has lead to rising housing costs that have hurt renters and first-time buyers, and oil royalties have financed tax cuts that have mainly benefited the wealthy.

Today I deal with a third example: workers aged 55 and over have seen very little improvement in the job market.

Consider the following chart, which shows the unemployment rate for different age groups in the province. 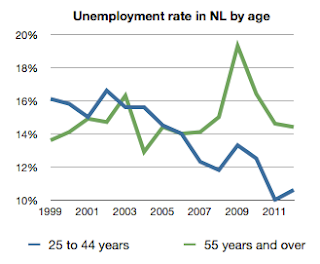 The unemployment rate for those aged 25 to 44 has plunged from 16% to 10% over the last decade, while the rate for those over 55 has stayed at about 14% except for a spike during the global recession in 2009.

The divergence between older workers and younger workers can also be seen with wages (I have corrected for inflation). 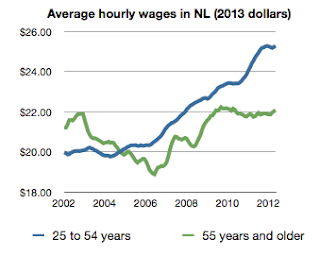 We see that the average wage for most workers has risen about five dollars an hour during the boom, whereas the average wage for older workers has risen only a dollar or two. Both unemployment and wages are very similar for these age groups in the rest of Canada. How can we account for the divergence in this province? I can think of three interconnected explanations.

The decline of seasonal employment

Young people are moving away from seasonal industries. In 2004, 10% of the young worked seasonally; today only 4% do. Meanwhile, the rate of seasonal work for older people has held steady near 12%. 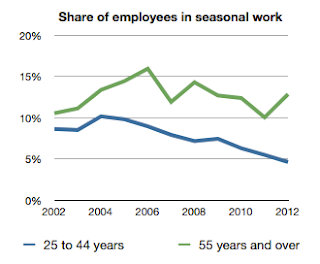 Seasonal workers count as unemployed for part of the year, so this trend helps explain why the unemployment rate has only fallen for younger workers. It also helps explain stagnating wages for older workers because seasonal labourers in processing, manufacturing and utilities, such as fish plant workers, have seen low wage growth over the decade.

Another factor is that the boom has been stronger in the North-East Avalon than elsewhere in the province. The following chart compares median family income in the St. John’s area to the rest of the province, corrected for inflation. 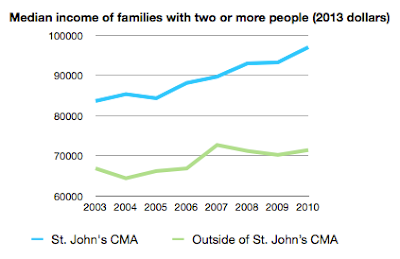 We see that incomes are higher near St. John’s and have grown more quickly during the boom than elsewhere in the province. St. John’s is now the richest Canadian city east of Ottawa by some measures.

Though unemployment is falling everywhere, it is lowest near St. John’s due partly to the prevalence of seasonal industries in rural areas. 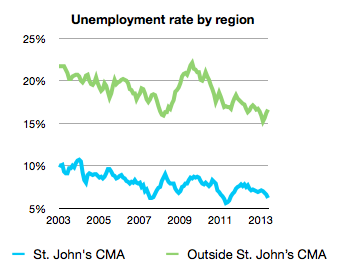 Young people have been attracted to the hot job market in St. John’s, while older people are less likely to move for work. Today more than half of Newfoundlanders aged 20 to 35 live near St. John’s, compared to only 35% in 2001. 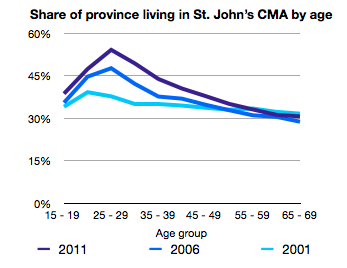 Rising education levels provide a third explanation for the divergence.  Unemployment is strongly correlated with level of education in our province, much more so than in the rest of Canada, ranging from 4.4% for university graduates to 24% for those without a high school diploma. 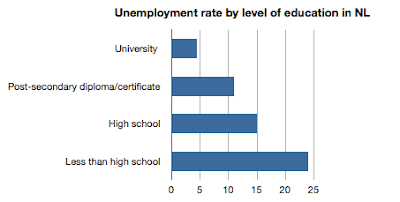 I could not find recent provincial data on wages according to educational attainment, but in 2005 Newfoundlanders with a university degree made 2.2 times more than those without, which was the highest ratio in Canada.

Young people have responded by getting more education. The share of younger workers without a high school degree has plunged and the share with a university degree has surged over the last decade, while the education level of older workers has shown little change. 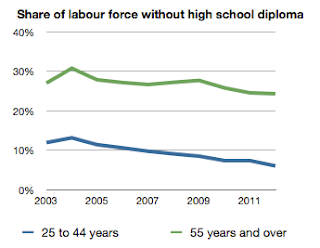 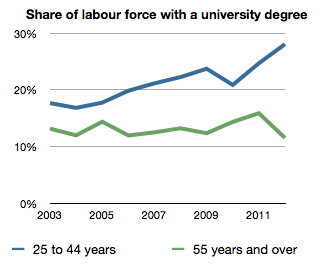 This is not really a bad news story. If people entering to the labour force are better adapted to the economy than those retiring, then productivity will continue to grow and set the stage for sustained prosperity. We should nevertheless acknowledge the plight of those left behind.