A Statistics Canada release on police-reported crime generated some alarming headlines in the local news media last week, among them “St. John’s Fourth Highest Crime Rate in Canada“. Is this alarm really justified?  Let’s delve a bit deeper into the crime stats.

The crime rate emphasized by the local media is quite misleading because it fails to account for the severity of crime. A better indicator is the Crime Severity Index, which places greater weight on more serious crimes. For example, a homicide counts 37 times as much as a break and enter by the index, but the two are treated as equivalent by the crime rate.

The following chart shows crime severity during two time periods. You can see how much the level of crime has changed in Canada, the St. John’s census metropolitan area (CMA) and Newfoundland and Labrador outside of the St. John’s CMA. 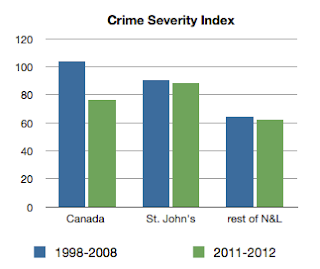 Crime is plunging across the country. Today every metropolitan area in the country has a lower crime index than what was the national average in 1998. There are no high crime large cities in Canada anymore.

Crime is falling in Newfoundland and Labrador, but not as fast as it is falling in the rest of the country. Crime rates only appear high in St. John’s because they have fallen so dramatically everywhere else. 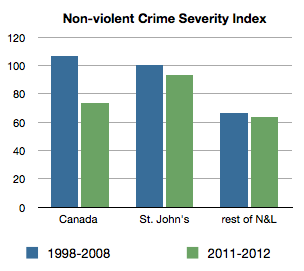 Violent crime is a bit different though. 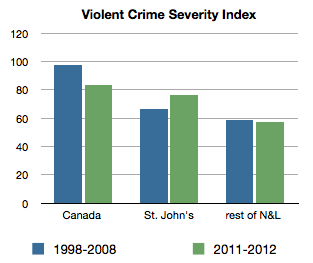 But what types of violent crime are on the rise in St. John’s? Some types have risen modestly (e.g. robbery, and homicide) and some have fallen modestly (e.g. assault with a weapon, and sexual assault), but the change in the index is mostly due to the increase of two types of crimes: uttering threats and common assault; the kind of violence that is getting worse in the city is the kind of violence committed by drunken idiots on George Street. Indeed, it is quite possible that the increase in the violent crime index is partly due to improved surveillance and security on George Street causing a larger share of threats and fist fights to get reported to police.

There is one type of crime that is unambiguously on the rise: illegal drugs. Cocaine has hit the province in a big way. 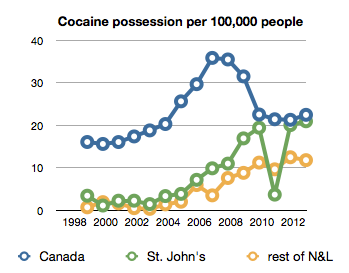 Rates of cocaine possession have grown from almost nothing 10 years ago to the Canadian average in St. John’s, and half that in the rest of the province (I have no explanation for that weird drop in 2010). Even more impressive is the rate for “other controlled substances”, which excludes cannabis, cocaine, heroin, meth and ecstasy, but includes black market prescription drugs like oxycontin. 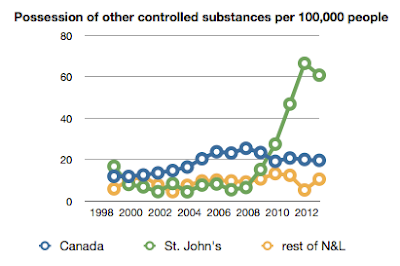 Here we see St. John’s has shot up to three times the Canadian average.

The rise of St. John’s to one of the higher crime cities in Canada is a story about crime dropping elsewhere, not about crime rising here. Still, it is natural to ask: why aren’t we sharing in the national trend of declining crime rates? This is obviously a difficult question to answer reliably, but I can’t help but speculate that the tremendous boom in addictive drugs has something to do with it. My guess is that our crime problem is really more of a drug problem.

Churchill Square was once St. John's most visionary urban development. Now its future hinges on its