Even without Kathy Dunderdale, the PC Party is likely to lose the next election; they need to start thinking about life after power and about their long term prospects. Here is some advice addressed to the PC Party on how to prepare for their return to opposition.

As long as it remains in effect, Dwight Ball will use Bill 29 as a bludgeon against the Tories. The bill is going to be repealed or amended in the near future, so you may as well do it yourselves and take the credit. Get your amendments endorsed by the Centre for Law and Democracy to neutralize any criticism that they don’t go far enough. You can counter the charge of flip-flopping by spinning it like this:

“While we are not persuaded by criticisms of Bill 29 itself, we acknowledge that a significant share of the public views the bill with suspicion. We also agree that there is always room for improvement when it comes to democracy. So in an effort to satisfy the concerns of all parties and to reaffirm our commitment to transparency and accountability, etc. etc..”

Just get it done so you don’t spend the whole election campaign getting beaten up on this issue.

The governing party has a huge advantage when it comes to raising money. In 2012, the PCs received almost 10 times more in political contributions than the other two parties combined. The money comes mostly from businesses trying to curry favour with government, so it will all go to your opponents when they take power. Now is the time to change our corrupt, pay-to-play, winner-takes-all political finance system for good. There are several ways to do this; here are a few possibilities:

Danny Williams promised whistleblower legislation in the 2007 election campaign, but never delivered – probably because whistleblowers cause headaches for the people in charge. What better bill to pass on the way out the door? Ed Hollett has made it easy by preparing draft legislation.

As currently written, the Electoral Boundaries Act requires that provincial electoral boundaries be redrawn in 2016 based on the 2011 census, instead of waiting a few months for the 2016 census to come out. Using five year old data is not only dumb, but results in the Northeast Avalon being underrepresented in the House of Assembly, as indicated by the following chart. 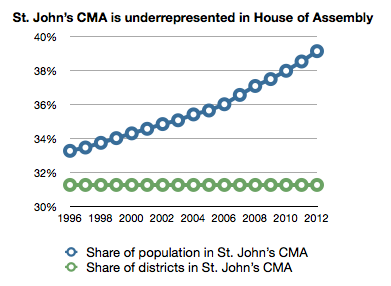 Since the PC party has traditionally found it’s strongest support in the Avalon region, it would be to the party’s advantage to redraw boundaries using the 2016 census rather than the 2011 census. This would give them a small, but significant edge until the boundaries are redrawn in 2026. This is a very sensible change in policy that is resistant to charges of political opportunism. Ideally, the electoral boundaries commission would take into account population projections, but that is probably asking for too much.

These reforms would help restore public trust in the PC party and put them in a better position for a future return to power. They also just happen to be the right thing to do.

Editor’s note: If you would like to respond to an article on TheIndependent.ca or address an issue we haven’t yet covered, we welcome thoughtful and articulate Letters to the Editor. You can email yours to: justin(at)theindependent(dot)ca. Not all letters will be printed, but all will be read.
Tags: Bill 29kathy dunderdalepc partyPCNLProgressive Conservative Part of Newfoundland and Labrador

James McLeod’s account of the past two years of provincial politics is both irreverent and thoughtful.