We hear a lot about Muskrat Falls as Danny Williams’ legacy, but it is hardly the only problem he left us to sort out. He rejigged provincial income tax rates between 2007 and 2010 so as to primarily benefit our wealthiest citizens. The result is that people earning in excess of $100,000 a year have since received – in the form of reduced taxes – more money than the province normally raises through income tax in an entire year.

This pattern is new and results from changes in provincial government policy that favour high-income earners. This policy choice involves two distinct, but complementary, processes: highly regressive tax cuts, and a dramatic increase in anti-social transfers. In this the first of two columns, I examine the impact of the cuts. In the second, I will explore how provincial government transfers have gone from focusing on those in need, through what are generally known as social transfers, to favouring people who in no way could be construed as needing public support, or what I call anti-social transfers. 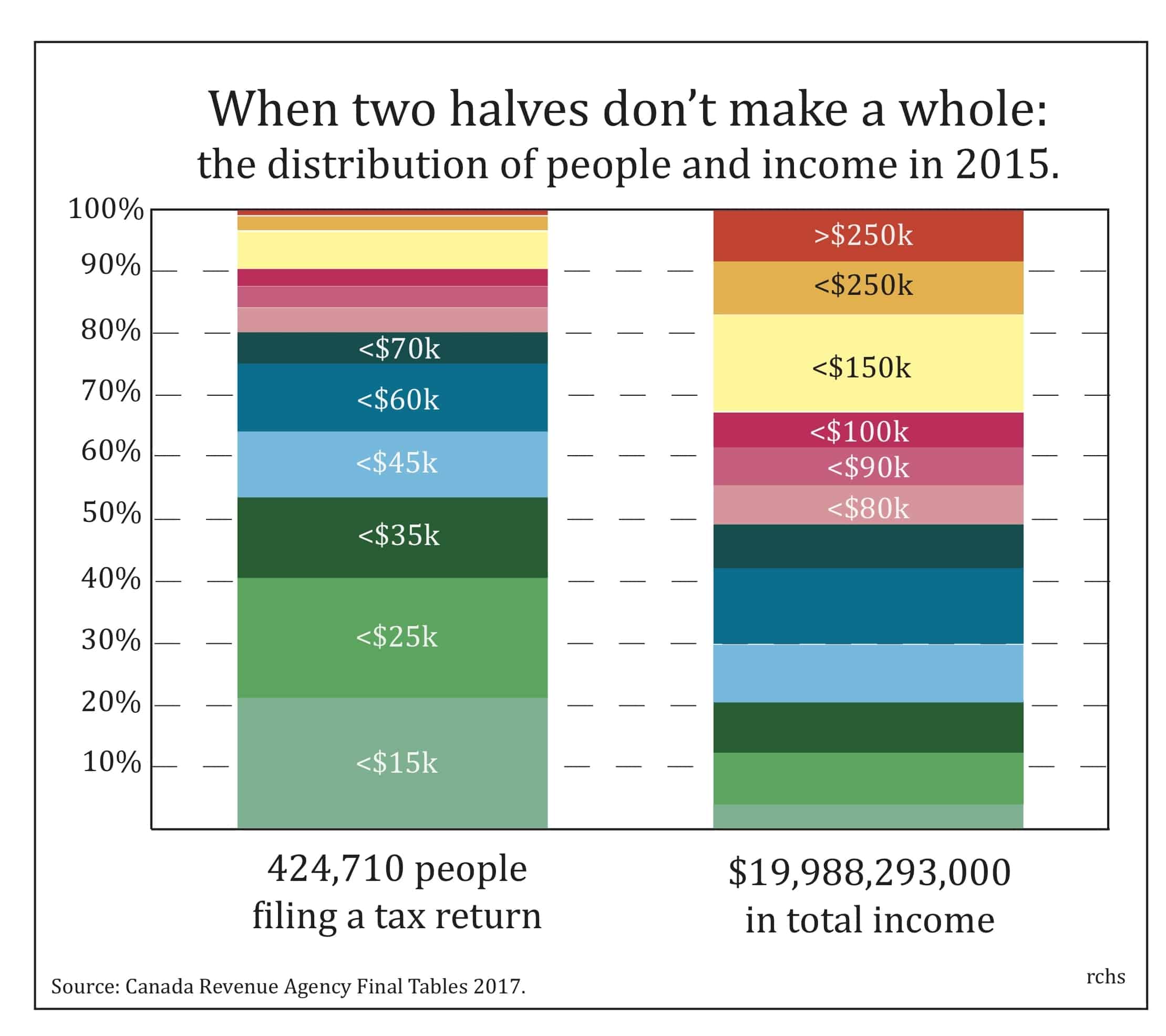 By 2015, tax policy had so polarized income distribution that it affected the very construction of this bar graph. There were so few people in each of the categories above $70,000 that I could not properly identify on the graph each of these higher income groups. Fortunately for graphical clarity, but unfortunately for the society as a whole, as their share of income far exceeds their numbers, there was plenty of space to identify each of these categories on the income column.

The colours demonstrate the historic weight of the three brackets of provincial income tax: the greens below $35,000 represent the lowest bracket; the blues below $70,000 are the middle bracket, while those quite literally in the pink were in what for decades had been the top bracket. This changed in 2015 with the introduction of two higher brackets, but as we shall see and as intended by the Davis government, the effect of these changes was quite limited.

I choose to highlight those earning above $100,000 by yellow into orange, because 2015 was the year that the controversy broke out over the provincial “sunshine” list.  You may recall the outrage at the apparent inequity of the province paying 3,995 people in excess of $100,000. These CRA figures reveal, however, that they only constituted one in ten of those basking in the sun that year. High-income earners in Newfoundland and Labrador are overwhelmingly in the private sector.

In 2015, the 3,200 people with an income above a quarter of million dollars each averaged $531,623, up $34,658 from 2014. This was their largest annual increase since 2007, raising them to seventeen times the median income of everyone who filed a tax return.  Although those earning between $100,000 and $250,000 saw no comparable average increases, the sunshine list did grow by 1,330 people in 2015 and total incomes increased by $235 million. Now, 2015 saw a crisis-sized provincial deficit, low oil prices, a further decline in GDP and renewed unemployment, but the boom was clearly not yet over for the wealthy.

To understand how important the changes to provincial tax policies have been in causing this exceptional growth in inequality, I have gone back to 2007, the year Danny Williams’ government initiated a series of tax cuts. Rapidly changing fortunes compares the distribution of people and income in 2007 with 2015. As the number of people filing a tax return had increased by 9% and total income increased a whopping 61%, the width of the bars for 2015 have been adjusted to accurately represent their relative growth.

Visually, the most striking aspect of these changed fortunes is the relative collapse in the income of the majority of people: those in the bottom tax bracket saw their share drop from over a third to a fifth of total income. Labour’s losses were capital’s gains; the bulk of increased income went to those at the top.

And yet, there is little here to support the idea of a hollowing out of the middle class. The relative size and share accruing to the middle tax bracket increased slightly, particularly if, partially accounting for inflation, we stretch the middle to include those earning less than $80,000 in 2015, as they were quite likely many of the same people.

Those in need more vulnerable

The greatest losses are clearly at the bottom. In 2007, a third of tax filers got by on less than $15,000 a year by sharing a tenth of provincial income. In 2015, when earning less than $15,000 placed you well below the poverty line, one-fifth of the population survived somehow on one-thirtieth of the total income.

The boom clearly benefited most Newfoundlanders, but it left a significant minority out. Those in need in our society were if anything even more vulnerable than a decade before for two reasons.

First, their lot in life was now so different from the experience of the majority.

Second, the dramatic increase in the number of people at the highest income levels affects the political economy of the province. By 2015, people basking in the sun accounted for one in twelve tax filers and they claimed over half the tax credits for contributions to federal political parties. We can assume their contributions to provincial party coffers were of a similar magnitude, but CRA does not release those figures.

To assess how Danny Williams’ tax cuts influenced these changing fortunes, I analysed the final tax tables from 2001 through to 2015. The dramatic decline in the provincial taxes paid by people earning in excess of $100,000 is shown very clearly on Basking in the sunshine. 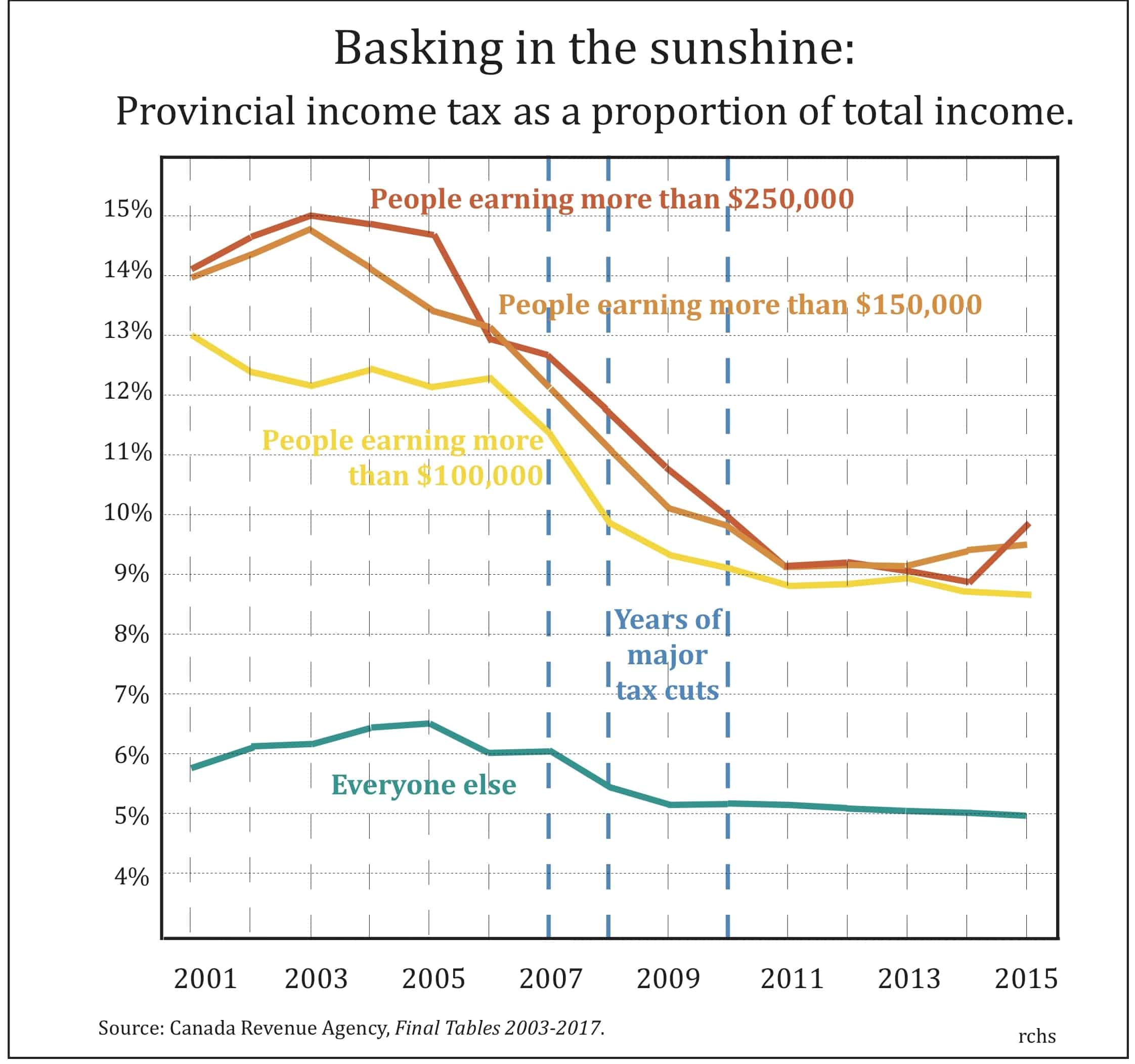 Clearly, it was mission accomplished for Danny. After all, the avowed purpose of the tax cuts was “to leave more money in the pockets of those who earned it.” Naturally, those with the deepest pockets got to keep the most.

Is the public paying for these tax breaks?

But there is another way of thinking about this. It might be considered a rather costly gift at the public’s expense. Indeed, it is a gift that just keeps on giving and, as more people join these high-income earners each year, the cost of that gift continues to grow.

If we take the average taxes paid by each of these three high-income categories between 2001 and 2006 as their base lines and then compare what the members of these three categories actually paid from 2007 through to 2015, we can calculate how much this gift to those earning more than $100,000 a year has cost the provincial treasury.

By 2015, the gift had cost us collectively $1,395,524,000. To put that in perspective, $1.4 billion was more money than the province had ever collected in income tax in any single year. In 2015 alone, the Williams tax cuts meant we gave away to the wealthiest amongst us $262 million.

That year, the Paul Davis government introduced minor changes to the tax rates, and we can see their limited effect in the uptick of the two highest income categories on the graph. The following year, Dwight Ball’s government significantly increased the marginal tax rates for the two new categories that the previous government had just introduced.  It is possible to calculate what difference these new rates make to the Williams legacy. If the current rates of 2018, i.e. after all Ball’s changes have been fully implemented, were applied to the income earned by the three top categories in 2015, it would have made a significant difference. Instead of giving away $262 million, we would “only” have given away $119 million.

The impact of the levy

There is, however, an important sequel to this thought experiment. The Ball government introduced a levy in 2016 that, although temporary, is still in effect. The levy hits people earning between $50,000 and $80,000 the hardest. Income earners above that amount start to pay proportionally less, considerably less the higher your income. If the levy had been in effect in 2015, this new gift to the wealthy would have cost us $31 million, and fully $18 million would have gone to those favoured few earning a quarter million dollars or more.

Danny Williams has left a complex, controversial and multi-faceted legacy. How the tax policies he championed have affected income inequality in Newfoundland and Labrador should be seen as an intrinsic, indeed essential, aspect of that legacy. They are, however, insufficient to explain fully our changed income distribution, for as one can see clearly on Basking in the sunshine, taxes for the two highest categories started to come down years before the first tax cuts in 2007. To understand why this was the case, we need to explore anti-social transfers, the subject of the second part of Taxes and Fairness.

In 2010, when Colliers International was listing the Battery Hotel and Suites for $15 million, they

I’m beginning to think the patient is better off living in his fantasy. After I hear

It is October 2007. An emergency all-party government unleashes a political revolution in NL. But a

Affordable housing initiatives, rezoning items on the outskirts of town and in
Poetry, audits, and Earth Month—it's all here.
Things really ramped up this week in comparison to the previously sleepy
The pedestrian mall returns! Also, Council hears complaints about some sugar cookies.
The 2021 provincial election is over. It is time to start the
Go to Top