I was in my early twenties when I told my happy-go-lucky uncle Jim I was gay. He froze with a look of shock and horror on his face, he even started to cry, which utterly bewildered me because he, too, was gay. This was not the reaction I was expecting.

Wait this isn’t about me. It’s about the Vancouver Men’s Chorus. Let me refocus.

I live downtown in one of the densest areas of North America and if I leave the house I have almost a 95 per cent chance of seeing someone from the chorus. Actually, as I was told, Sandra Oh was in town and she almost collided with one of us named Yogi; that alone would be a tale, be like her bumping into Vancouver’s very own Kevin Bacon/Glinda the good witch. So, frankly, we are literally everywhere. There’s a 130 plus guys engaged in what I’d call a throw-back habit from days of old. Of course, with this many guys, there’s a hidden mountain of unexpected talents.

Nope, the refocus is wrong, let me go back to the beginning…. to when… I was born! Actually to when any and everyone of us was born. We were born to mothers and fathers wide-eyed, adoring, and loving, no doubt with the greatest expectations of us to become baseball players, race car drivers, astronauts, or policemen– well, even if the bar was set lower, the minimum hope (if you were a boy) was for at least a Man’s kind of Man, you know.

So back to my Uncle Jim. Wiping tears away from his eyes he said, “I had no idea your life was so hard. This isn’t the kind of life I wanted for you.” I was so perplexed, “What ever do you mean ?” I asked and learned his identity came at quite a price–bullying, harassment, violence–it wasn’t easy for him. He always cast quite an image of happiness, so this truth and his tears made my soul ache. Drinking, drugs and behavioural issues, hell even suicide have plagued his generation, heck even mine and there’s a hidden slew of landmines we do our best to avoid. Because I was a late bloomer–and just a damn lucky fool to arrive from Alberta to Vancouver unscathed, undamaged, and pretty happy-go-lucky–I escaped most of that.

Now this is where the chorus truly enters the scene. God knows I love to sing. God knows I love to sing Big and Loud and Diva Mighty, but he also knows I am terrified of the stage. So what a glorious solution: to still sing–and yet to hide in a sea of swarthy, dashing, smell-good men. I was intimidated, I tell you! Gorgeous voices (not all, but many) and I like that it’s open, arms wide open to a great many. For this is the place we come to when we don’t want to meet familial expectations. This is the place we come to to be safe. But more importantly than anything, this is where we come to flourish.

An ample dollop of the chorus likes to dress up in wigs and dresses, Newfoundlanders may compare this to Mummering. In fact there’s a choir off-shoot Drag Show, called Singing Can be a Drag, with outrageous talent and beauty!!! Jessica Rabbit, played by Mark C. was my personal favourite, but one kid mere twenty something, named Austin W. sang “I’m the Greatest Star” more likablely than the Great ‘Babs’ herself. Months on from the show, I am still clapping. Since I personally have an outright lipstick phobia, that kind of thing is a no go for me, but I enjoy seeing so many guys come to life, crawling out of their Van Drab ordinariness into all the glamour they can muster. I am a sculptor and even that skill hit a high note when Mok and I (and a few troopers) made a giant tiger partition (much like a Chinese Parade Dragon) held by 7 guys which was used for an “Eye of the Tiger” number. Oh how the audience loved it!

We’re the oldest gay chorus is Canada and, even in the fifteen plus years I’ve been around, it’s morphed quite a lot. Wilie Zwozdesky and Dr. Stephen Smith still conduct and play the piano with charm and elegance. We no longer sing seven languages for one show and now choreography has become integral. Energetic numbers highlight about ten dancers: the guys impressively strut the floor in butch, beat-thumping rhythm. Sometime, because there are a few ballet trained souls in the ranks, the dancing is a bit more classical and the audience is never prepared for the height and the power of the jumps. We always have something up our sleeves for each act, costume-wise and visually we are always on the move. So we are a group of singers yes, but we’re more: we are dancers, choreographers, set designers, costume designers, music writers–and add a few local musicians to give it all a dose of Carnegie Hall magic.

What I wouldn’t give for my Mom and Uncle to have at least once seen me up on stage, ‘all dolled-up’ (as she would have said) in my Tuxedo, seeing me standing proud among friends, doing something I clearly love, with people passionate and talented. There’d be an epiphany!  Essentially parents just want kids to be happy in life and, when the route they took  for themselves fails for us, choir is the expression that says we’ve gone and figured it out for ourselves, that we arrived in our demiheaven of singing and dancing, but more importantly that we’ve arrived in a community of acceptance and love. So when parents have kids they’ll always have their hopes, but one might become “Well, I sure hope he can sing!” 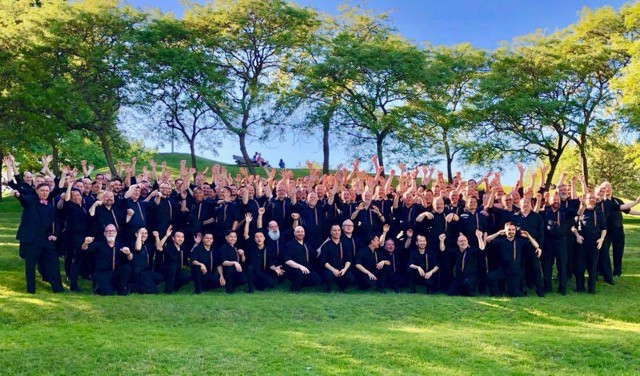 Twillingate is in the midst of a yarnbombing that aims to lift
The 1992 Cod Moratorium was the toughest political decision of Crosbie’s career.
Michelle Porter talks with the Indy about her debut book of poems,
Memorial University's new writer-in-residence talks about inclusive theatre, the power of the
It wasn’t until Marlene Creates decided to ‘think oppositely’ that she found
Go to Top