The weightlessness of being

How the space industry is bringing microgravity down to earth

A friend of mine recently recounted a dream that started with them floating off the ground and ended with them flying way out into space, past the International Space Station (ISS). Personally, I rarely have flying dreams, favouring instead the OMG-all-my-teeth-are-falling-out-again variety of recurring night scenes. In fact, I can count on two fingers the number of times I can recall having floated. What these experiences lack in quantity, however, they make up for in elevated quality of dreaminess. So when I hear that a friend has detached from gravity while lying asleep cozy in their bed, I fondly remember the pure thrill of levitation all over again.

For the space industry, the experience of free-floating weightlessness is not just a metaphor for an elevated state of being, but a practical business. Fundamental to space physical sciences, along with questions of quantum entanglement, the history of the universe, and composition of star stuff, is the study of the microgravity environment and the movement of objects in space. Weightlessness, zero-g, or microgravity are all terms used to describe the same thing: that marvelous sensation of floating experienced in the free-fall state. Research conducted in this state allows us to answer fundamental questions about how our physical selves, as well as the earth and the larger universe functions without gravity (or more accurately, with minuscule amounts of gravity). But considering the fact that all the earth is in fact subject to gravity, how does this research take place?

If you want to research in microgravity for any extended period of time, you have to go off-earth. Orbiting spacecraft in freefall around the earth, such as the ISS, are the best long-term research platforms. However, there are limits to the number of experiments that can be conducted in the space environment due to the costs, risks and time required to send it into space, as well as the limited number of actual space lab facilities. SpaceX has opened this up with Dragon, the first commercial spacecraft taxi to the ISS, and is developing “DragonLab” as an in-space research facility, but costs are still considerable. There is also another pesky problem with orbiting experiments: the scientists often have to stay behind on Earth. Unless the research team can afford to send a payload crew member or arrange for already orbiting crew to conduct the experiment, additional software, computer and robotic development is required in order to successfully conduct the experiment remotely.

For experiments that don’t require long-term exposure to microgravity, there are a few alternative methods, including drop tubes, suborbital rockets and parabolic aircraft flights. Drop tubes or drop towers like ZARM Drop Tower Bremen allow for study of dropped objects that experience a few seconds of near-weightlessness in an atmosphere-controlled environment. What they lack in freefall time they make up for in prep time and cost effectiveness. However, if you require more than a few seconds, a sounding rocket may be a better bet. Suborbital sounding or research rockets, like those launched at the Andøya Rocket Range in Norway, are able to carry experiment instrumentation up to the height of satellites or weather balloons, and provide a few minutes of weightlessness in-flight. Parabolic flights provide the additional huge bonus of allowing the crew to come along for the ride. During the flight, participants ride a stomach-churning session of 10-30 parabolic rises and dips. Typically this allows for 20-30 seconds of weightlessness during each “push over” of the plane. While experimentation on these flights are often arranged in partnership with space agencies, space tourism companies like Zero Gravity Corporation also allow for microgravity research and education.

With the lines between microgravity research and tourism becoming blurred on these vehicles, an interesting phenomenon is occurring: the public wants in on the weightless experience. The party bus is going suborbital.

On April 22, a giant high-altitude balloon will be released from the Nevada desert. It will float upward, expanding and drifting until it eventually pops somewhere in space. The person who guesses the popping location most accurately wins a suborbital spaceflight prize. If this sounds suspiciously like a high-end baby shower game for the New Space set, you wouldn’t be far off the mark. March 15, 2013 marked the birth of the first ever public parabolic commercial flights in Europe. Arranged by Avico and Novespace, the zero-g flight was offered through Spaceport Sweden’s space adventures and astronaut training program in collaboration with Space Expedition Corporation (SXC). In fact, the space balloon-popping contest, launched by KLM Royal Dutch Airlines, is one big social media game aimed at whipping up support for SXC.

The contest prize is no mere party favour, but a seat on board the XCOR Lynx suborbital spacecraft. While it only takes one big leap into the weightless environment, instead of the 15 parabolas offered by Zero G, it is one heck of lofty, high leap resulting in minutes of weightlessness. And unlike Sir Branson’s Virgin Galactic, as the only participant on the Lynx, you get to play co-pilot.

This sense of play is a running theme throughout Virgin Galactic and SXC, and is rooted in the understanding of the human need for metaphor and creativity. While microgravity spacecraft environments have predominantly been vehicles for scientific research up to now, the commercial space industry is shifting that view. The future consumers that will fuel trips to space are not just scientists, but the general public. In order to sell the weightless experience to the public, space companies still need a fundamental way to express that experience in a gravity-bound environment. Social media gaming is a hot method of expression right now, but there is something deeper that connects us all – the experience of being in our own bodies.

While the KLM balloon-popping contest creates an interactive and attractive futuristic gaming experience, the opening of Virgin Galactic’s Spaceport America utilized a more traditional technique of hiring a dance troupe. Contrasting the technological leap into space, aerial artists Project Bandaloop used simple rigging, costumes and the human body to convey the essence of floating. Who better to convey the release from gravity’s shackles than a dancer?

We can expect to see more of this creative expression of levity as the microgravity experience portion of the space industry develops. Spaceport Sweden, a partner of both SXC and Virgin Galactic, is committed to a vision of itself not just as a gateway for scientific research, but a “creative hotspot” for space travellers. This type of thinking reminds us that travelling into space is not just a scientific or a technical challenge, but a transformational state of being fueled by our imaginations and our dreams. 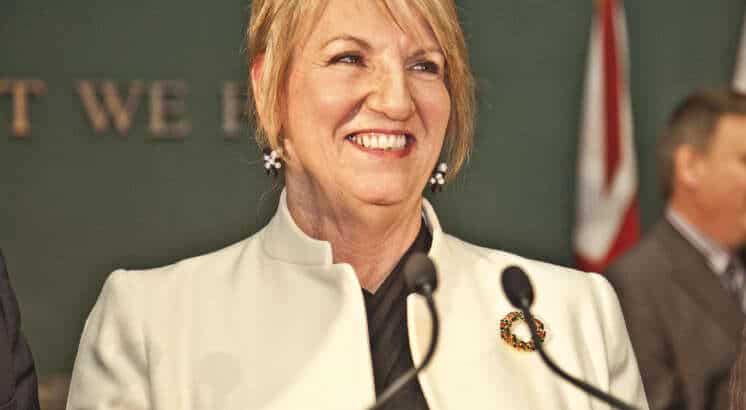 It was the best of times, it was the worst of times
Amidst mounting tension on Confederation Hill and throughout the province, the Dunderdale administration is seeing the backlash to its own austerity program. Current efforts to…