Thursday marked the first full evening of music of the third annual Lawnya Vawnya independent music and art festival. Ben Rigby and Samm Joyy were on hand to catch the shows and the atmosphere of one of the capital city’s most unique musical celebrations.

Rocket Room was lucky enough to enjoy a packed audience last night with three sets of music on day two of Lawnya Vawnya.

Lawnya Vawnya organizers have shown again this year their knack for finding young talented musicians and giving them a quality chance on a quality stage. They aren’t tucked away in some ‘young artists’ venue or some other designated stage where folks like me simply won’t go, they’re put on stage along with everybody else and get the same audience that everyone else gets. They deserved it too, because presented a nicely polished set with mostly original songs that clearly meant a lot to them. The passion they carried was infectious, and the audience tonight at Rocket Room was clearly feeling the vibe.

All I can say is that I saw plenty of folks buying this guy’s record. He obviously touched some hearts in the audience and the attentiveness was palpable in the atmosphere tonight. As a one-man show, Paper Beat Scissors was excited to be in St. John’s, at Lawnya Vawnya, and it showed in his performance, which was energetic and sincere. His songs are not entirely distinguishable from the generic indie-pop sound. You have that ‘now I’m finger-picking lightly; now I’m strumming heavily and singing at a high pitch for some reason’ sound heard on just about every single Broken Social Scene track ever made. Never mind me though, this old contrarian just can’t understand all those emotions people keep singing about.

This is an act I can follow. Coming in all the way from New York City, Lewis is a comic-book artist, a songwriter, poet, and visual artist who showcases a natural penchant for comedy but, like all great comics, manages to remind you of life’s serious issues. He put myself and the crowd into stitches with his banter and at moments his music spoke to me on a pragmatic level, with tangible messages, unfettered by poetic license or bad imagery.

Lawnya Vawnya goers were in for a real treat Thursday night as The Ship was overtaken with a not-so-acoustic vibe. With two talented ladies fronting rock bands, followed by a 60s inspired garage band, the room was filled with energy.

To see sweet Ilia Nicoll front a rock band was intense. Known for her intricate voice and heartfelt lyrics, her take on more of a rock style was refreshing. Accompanied by her band The Hot Toddies, which have taken on the much more risqué name of Hot Titties, she set the soulful rock atmosphere that was upheld throughout the night.

The Highest Order captivated the audience as Simone Schmidt’s deep, edgy vocals echoed through The Ship. Her voice compared to that of Janis Joplin and Grace Slick, entranced listeners, while bassist Kyle Porter and drummer Simone TB sustained a powerful foundation. Combined with Paul Mortimer’s powerful guitar, the band successfully produced a psychedelic sound and stirred up some interesting dance moves from the audience.

To end off the night, the Delusion Victims hit the stage hard with a much improved sound. Although inspired by the raw garage rock of the 60s, Pete Mills voice gives the band a slightly softer edge. The band’s insightful lyrics and noteworthy stage presence appealed to the audience as the atmosphere settled down and the show concluded.

The Thursday night show left attendees with a heightened awareness of music and anticipation for what awaits them as the Lawnya Vanwya festival continues rocking and rolling.

Later on tonight, at Distortion, I was treated to a show I wouldn’t normally find myself at. A little intrigued by the unknown, I was eager to hear what else Lawnya Vawnya could throw at me. The bar was about half capacity by midnight, by which time the place was rocking with some heavy, heavy sounds.

Pervert Week opened the night. I never quite got the explanation for the name. Is this pervert week? Should I be concerned? Once I was able to shift my attention to the band I realized who cares what the name means, these guys can rock! They interacted as a band should, by not stressing any one element over another. A hard rock outfit (metal? Scream band? I admit I have no idea), Pervert Week put on a performance that showcased some solid musicianship. The whole band worked together, they weren’t a bunch of supporting cast for a singer who had a bad day and wrote a song about it, they improvised, they jammed, and most importantly they and everyone on the dance floor had a hell of a time.

I felt bad for this Toronto based duo. An electronic act, they had an electric guitar, vocals, and a small keyboard supporting a vast collection of digital equipment. They clearly had a lot more to their sound than what made it across to me. The bass was too much for the Distortion system and so all I could hear was mud on top of beats. Unfortunately they weren’t even particularly interesting beats. I really feel that if I could have heard more the subtleties myself and the audience would have gotten into the rhythm much more. As it stood, the psychedelic ambient noise and undecipherable lyrics on top of mediocre beats just flopped.

This grunge rock group from Sackville, NB closed out the set. It was really awesome to hear a solid garage rock band that actually thought about their music and their sound. By the time they took the stage it was well past one in the morning and the bar had suddenly been filled with excited festival goers. What a blast.

Friday’s Lawnya Vawnya schedule includes a free/all-ages panel discussion, Loud and Clear: Women in music and film (in conjunction with St. John’s International Women’s Film Festival) at noon, a free/all-ages Comic Art Talk with Jeffrey Lewis at Eastern Edge Gallery at 6:30 p.m. (in conjunction with Words in Edgewise), Wreckless Eric & Amy Rigby, Lisa Bozikovic and Kat McLevey at Rocket Room (all ages, $10) at 7:30 p.m., The Mouthbreathers, Shotgun Jimmie and Mark Bragg & The Butchers (19+ / $10) at 10:30 p.m. at The Ship, and Derm Kean & an Incredible Woman, U.S. Girls and Bloodshot Bill (19+ / $7) at Distortion, 10:30 p.m. 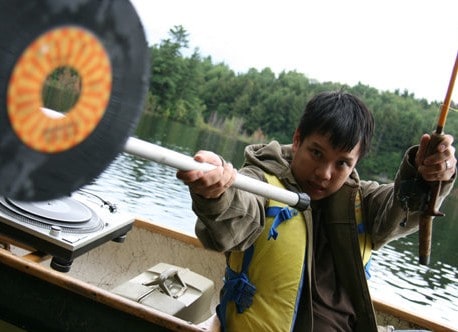 Ghosts in the machine: An interview with Kid Koala
One of Canada's most renowned DJs is in St. John's this weekend. Eric San - aka Kid Koala - talks about his latest album, and…