We need to make it clear that the status quo isn’t enough. It is time for things in this province to change. It is time to put our victims first.

On September 25t, 2020, I was sitting in my living room, scrolling through the CBC app on my phone, when I casually mentioned to my fiancé that they had sequestered the jury for the Snelgrove trial.

I, like many, had been keeping news of the trial at arm’s length. Every time I read the testimony summaries, I would be simultaneously heartbroken for Jane Doe and furious that this process was still dragging on. I was about to keep scrolling when my fiancé replied: “Yeah, they declared a mistrial. It’s over.”

At first, I felt shock. I sat in stunned silence for a moment before I was able to ask what had happened. The more he explained, the more questions I had.

“What do you mean, a mistrial?”

“What do you mean the judge made a mistake?”

“How can they throw a case out because they didn’t draw names out of a drum?”

I was furious, not only for Jane Doe but for what this meant for sexual assault survivors in this province as a whole. I thought about the number of people I knew in my own life who never reported their assaults. I thought about how many conversations I had participated in where people had expressed a lack of trust in the justice system. I was livid.

After my third unsolicited rant about the justice system (over supper, no less), I decided to make a sign. Within a half an hour, I had my sign in my hands and was standing on the stairs of the Supreme Court of Newfoundland and Labrador, proclaiming via poster board that “Rapists Should be in Prison, not on their Third Trial.”

Over the next eleven days, I stood outside the court—sometimes with others, sometimes alone—quietly holding my sign. It was incredibly nerve-wracking the for first couple of days, but gradually it got easier. When you protest, you assume you’re going to be on the defensive—that people are going to want to argue with you. Turns out, I can count on one hand the amount of negative street-level interactions I had. The honking horns, the waves, the expressions of thanks and shares on social media told me I had tapped into something. There were plenty of people who were just as upset as I was.

I also discovered there were many people—too many—affected by sexual assault in this province and disenfranchised by the legal system. Almost every person I spoke to had either been a victim, or someone they loved was a victim. I heard stories of court cases thrown out despite overwhelming evidence, rapists allowed to walk free, and the toll the trauma of going to court takes on a person. Even more than that, I heard stories of those who never came forward because they didn’t think the legal system would help.

Over and over again I heard “I never reported it because what was the point?” or “I never said anything because they didn’t do anything for my friend when she was raped.”

These are the stories that hurt me the most, because mine is also one of them. I see myself in Jane Doe. He was sober, I was not. He was told to look after me. He did not. I didn’t understand for years afterwards what had happened, because I told myself (and was told by others) that I’d been drunk, things happened, I was just as much to blame. I never thought about speaking out. I never thought about turning him in. I believed that the system wasn’t for cases like mine. I buried it. I moved on.

The justice system has a problem, and that problem is that we do not trust them to do their job.

When you have a case like the Snelgrove trial, where six years have passed without resolution, what are you telling those victims who haven’t come forward?

Are you saying, “We take your complaints seriously?” No.

Are you saying, “We are here to help you seek justice?” No.

Are you saying, “We believe you?” No.

What the justice system is saying is that we’d better buckle up and get ready to relive our trauma over and over again because your judges might make a mistake and get the case thrown out. Twice.

Now, it’s easy for me to rail against the system, pointing out its flaws and demanding it do better, but I know that those in power want concrete suggestions. Complaints are empty to them unless they come with solutions.

So, here are a few things I want to see from the Supreme Court of Newfoundland and Labrador, the provincial government, and our lawyers and Crown attorneys.

First, I want to see a court division specifically for domestic violence and sexual assault. Before COVID-19 hit and the country shut down, there were serious conversations about a sexual assault and domestic violence branch of the provincial court in Quebec. In an interview for Canadian Lawyer Magazine in March 2019, Quebec Justice Minister Sonia LeBel remarked, “What is important to understand is that sexual crimes have a different psychological element in that victims are judged by their actions or inactions… This requires education and certain types of understanding to judge criteria differently in that context.” The proposed system—which has received support across all parties in the Quebec legislature—would see judges, lawyers and legal experts trained on the effects of trauma on victims of sexual assault, as well as a streamlining of access to resources for victims. It works to empower victims through the entire process, helping them feel like the system is working with them, not against them.

Specialized courts are nothing new in Canada. New Brunswick has had a domestic violence court for a decade. This court focuses on breaking the cycle of violence that results from domestic abuse. First, immediately following a complaint, an emergency protection order is issued removing the abuser from the home and minimizing the disruption on the lives of the victims and any children involved. The complainant immediately receives access to a social worker, a counsellor, Victims Services or anything else they need. It simplifies and demystifies the process, so individuals feel more confident at what is a challenging time in their lives.

The court also focuses on offender accountability. Behaviour management courses and rehabilitative programs are mandatory, endeavouring to show the offending party how their behaviour was problematic and how to correct it in the future. At its core, the process aims to break the cycle of violence within the community—stopping abuse in its tracks and preventing it from continuing in the next generation. Studies have shown that these courts have a positive influence on the culture around domestic violence. People are now more aware of the issues and more understanding of the various elements that cause domestic violence.

Here in Newfoundland and Labrador we have a Family Court division that stands separate from the other areas of the justice system. This division focuses exclusively on matters dealing with custody, access, child support, spousal support, and at the Supreme Court level, divorce and division of assets. These particular issues are unique and need a judicial environment that treats them as such. A sexual assault court would operate in a similar fashion.

We would have judges, lawyers, and legal experts that specialize in understanding the trauma experienced by victims of sexual violence. Defense lawyers would receive training on how to cross-examine vulnerable people to minimize re-traumatization on the stand. It would empower complainants to better understand the legal system and wouldn’t have them feeling left behind.

The courts can only get us so far, unfortunately, and we still have a lot to work on as individuals and members of this community. I want us to start believing victims. Not just as individuals, but as a culture. If someone is choosing to go through this process, and in Jane Doe’s case, to go through it three times, that should show us that they are telling the truth. We as a society need to believe victims and not write off their complaints. Survivors are everywhere. They are your friends, your siblings, your coworkers and your parents. The incredible number of individuals who have lived through this should be telling enough.

On Wednesday, November 25t, 2020, the NDP District Association for St. John’s Centre is hosting a panel on sexual violence and judicial reform at the Royal Canadian Legion on Blackmarsh Road. I, along with four other incredible people, will be speaking about the changes we want to see in this province. I encourage those of you who are able to come and sit in the audience, or to watch the stream online. We need to make it clear that the status quo isn’t enough.

It is time for things in this province to change. It is time to put our victims first.

Photo via the author.

More UFO Sightings Since Start of Pandemic
There was something weird spotted in the sky above Main Brook on Newfoundland's Great Northern Peninsula in January 2020. 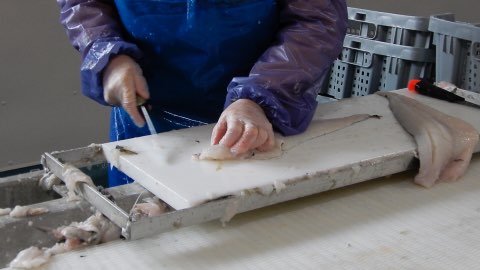 Who Controls Fish Processing in Newfoundland & Labrador?
Is corporate concentration a central part of the province’s long-term strategy for the fishery? How does that benefit Newfoundlanders and Labradorians?