The glaringly obvious question right there is where are Kathy Dunderdale and her government???

Kathy Dunderdale is doing an absolutely piss poor job standing up for the people of this province after her buddy Stephen Harper decided to close the Marine Rescue Sub-Centre.

VOCM reports this morning that several groups are meeting today to organize a rally against its closure. Some of the groups involved include the Federation of Labour, Fish, Food and Allied Workers, and the cities of St. John’s and Mount Pearl.

The glaringly obvious question right there is where are Kathy Dunderdale and her government???

It’s pretty sorry, not to mention wholly negligent, when sucking up to the Prime Minister and working overtime not to fall out of favour with him to get this loan guarantee for Muskrat Falls trumps the safety and lives of our citizens, those who venture out into the Atlantic Ocean most often for their livelihoods.

It seems to be another case of ego and legacy overriding the health and safety, and lives, of our people.

And it is not the first time this “PC” government has acted in this despicable manner all because of ego and legacy.

Last week, The Packet broke the story that the Williams Government™ waited days, three days to be exact, before giving the federal government the green light to assist to Hurricane Igor ravaged areas like the Bonavista and Burin Peninsulas that they were ready from Day One to assist.

Danny Williams, some of his puppets, and “Steve”, toured the areas via helicopter, all the while staging photo ops and the appearance of doing something along the way, the same day Williams filmed the “comedy” sketch pictured below.

The glaringly obvious question right there is why did Danny Williams and his government hesitate to use this desperately needed federal assistance for three days? You had people suffering needlessly for that amount of time immediately after a natural disaster.

And why was shooting This Hour Has 22 Minutes of greater primacy to Williams at this time over the needs of his citizens who were in serious distress after this natural disaster?

It was this “go it alone” ego-driven attitude, this stubbornness that was the reason Williams and the Williams Government™ would not accept the federal help for Igor, offered on the very first day, as The Packet also uncovered.

This kind of politicking that endangers lives is nothing new to this government, past and present.

We saw it in the nurses’ and doctors’ negotiations with the former Premier, and how personal and acrimonious both those disputes got. Williams, because of his hubris, did not resolve his dispute with the province’s doctors as he jetted from office after inking the Muskrat Falls term sheet, leaving his then untested handpicked successor to settle that obscene stalemate.

People’s lives were at risk in both disputes, with nurses’ morale and reputations called into question – to put it mildly – and an eleventh hour save by who else, Williams, that ended that nasty impasse that brought our health care system to its knees.

And if that wasn’t enough, the system was severely compromised and its collapse threatened once again with the former Premier refusing to budge in his position on doctors’ salaries, a situation exacerbated by the fact that he gave one group of specialists, pathologists and oncologists, a significant raise after the Cameron Inquiry. And like with the nurses, doctors as a collective, as well as individual doctors, had their reputations besmirched.

And of course you all remember the infamous hissy remark the former Premier made during that same imbroglio, regarding the bureaucrats at Eastern Health, incidentally a government organization of (!) the Williams Government™:

“They should all be shot over there.”

Yes, this was the brilliant leadership of our former Premier, gone on now to another glamorous pursuit for us peasants.

Back to the snafu we find ourselves in collective exasperation regarding the position taken by the sitting Premier. This time, Kathy Dunderdale skulks behind the scenes as opposed to her bombastic predecessor who had a penchant for running to the media to launch his epic tantrums. Either that, or her cell phone is out of range.

While Williams was never one to cower and while he took things to one extreme, that of excessive pugilism, Kathy Dunderdale on the other hand is as meek as a mouse, acquiescing in deference to Stephen Harper while our Search and Rescue (SAR) Centre is stripped by him.

If that is not a complete absence of leadership, not to mention complete incompetence, lack of political will, and disgracefulness, I don’t know what is.

Just as if anyone had died if staffing and services had been compromised because of either or both of the health care disputes during Danny Williams’ reign , he would have had blood on his hands for it.

Luckily for patients, and for Williams, that did not happen.

If Kathy Dunderdale refuses to fight for our SAR Centre, and it is all because she does not want to rock the boat – pardon the expression – to gain this Lower Churchill loan guarantee, then she is putting the safety of Newfoundlanders and Labradorians at serious risk, just as Williams did in the two health care wars during his tenure.

Refusing to hold an emergency debate in the House of Assembly over this issue, and more to the point refusing to take Stephen Harper on over it, shows how ineffectual, servile, and completely inept Kathy Dunderdale is as Premier of this province. And in this election year, people need to be especially tuned in to this increasingly glaring reality.

And while politics is being played here, by Harper and by Dunderdale, this issue in particular is not about politics at all.

It is about the safety and lives of Newfoundlanders and Labradorians at sea and if politics is to be played with our basic safety, played with the basic protection from our governments that we expect and assume from them, then that makes this situation particularly unconscionable.

Be a leader, Premier.

For more of the author’s blog visit The Fighting Newfoundlander 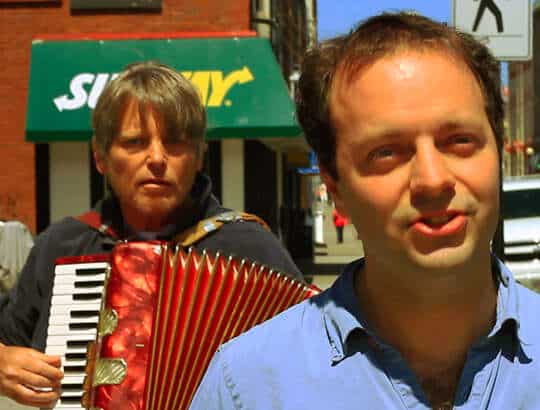 VIDEO: Mark Bragg | Your Kiss
Mark Bragg and friends walk as far as a song will take them down Water St.