The answers to your questions

1. If you had to pick one thing you would like to accomplish in your time as premier, what would it be?

I firmly believe we’ve never been in a stronger position as a province and a people. My goal as premier is to ensure we continue in that position of strength, building on the incredible momentum our government has created over the last eight years.

2. What are your thoughts on the Fisheries minister outright dismissing the MOU document on the very day it was released? Wouldn’t it be more reasonable to actually let the department and public absorb the advice of EXPERTS before categorically dismissing its content?

We are more than prepared to look at certain aspects of the MOU proposals which have merit, such as the recommendations on marketing and financing. However, it was readily apparent to the minister when he received the final report that an investment of more than $450 million by the taxpayers of the province is not reasonable. We certainly had expectations that the MOU report would present viable solutions for meaningful change in the fishery, not just through rationalization but restructuring as well. That did not happen.

I have asked my Minister of Fisheries and Aquaculture to continue to engage the FFAW and Association of Seafood Producers, which he is doing. We’re more than open to looking at proposals that can meaningfully address the industry’s challenges and we will also work to secure the Federal Government’s participation. We all want a viable industry that will contribute to our economy for years to come.

“Our government believes in engaging residents to inform our decision making and to ensure we are responsive to the needs of the people we serve.” —Kathy Dunderdale

3. Will your Government begin an open and honest discussion on the future of rural NL? Issues of regionalization, local economic development, the fishery, forestry, agriculture, healthcare and crumbling infrastructure are at the forefront, but the discussion must be comprehensive. When will Government stop talking about investing in rural NL and actually show vision and make some real change to help build sustainable communities?

One has only to look at our government’s record and the level of investments in rural areas of our province to know that this government is one which does not just ‘talk the talk’. We stand by our record in rural Newfoundland and Labrador. Our unprecedented investments in the province’s more traditional industries, provincial infrastructure, business and economic development, health care, and education represent this government’s commitment in rural communities.

As an example, of the more than $3 billion invested in provincial infrastructure over the last seven years, over 80 per cent has taken place in rural Newfoundland and Labrador. In addition, the Provincial Government has invested in excess of $60 million in economic and business development initiatives, of which 71 per cent has been made in the province’s rural communities.

Dialogue with community development groups, municipalities, economic development associations, and countless others on key issues impacting their communities and regions is ongoing. It is a central element of the Provincial Government’s approach to business and community development and was behind our creation of the Rural Secretariat which, in collaboration with the public and stakeholder groups, works to advance the sustainability of rural Newfoundland and Labrador communities and regions. The Secretariat has nine regional councils which submit policy advice to the Provincial Government.

4. Why are so many children in care of Child Youth and Family services placed in precarious living situations (e.g.: staffed hotel/apartments contracted out to private companies by Eastern Health)? The very children and youth (often very young infants) who need the most nurturing and care after being taken out of their family of origin for reasons pertaining to risk are placed in unstable living situations. It doesn’t make sense. The government pays millions of dollars per year to fund these precarious living arrangements while putting much less funding into the foster family program or programs that allow children to remain in their homes with increased monitoring.

Ensuring the safety of children at risk is one of our government’s highest priorities, and was behind our creation of the Provincial Government Department of Child, Youth and Family Services. Children are only removed from the family home when they are at risk.

If a placement cannot be obtained with relatives or significant others, foster care is the next best option for most children. There is, however, a shortage of foster homes across the province, as well as in other jurisdictions in the country.

There have been significant efforts to increase foster families in the province through substantial increases to foster care rates. While the goal of the department is to eventually eliminate the use of alternative living arrangements, they are sometimes necessary in the short term for complex cases, requiring specialized support not readily available in foster care or in emergency situations until an appropriate placement with relatives or foster care can be found.

As a temporary measure, alternate living arrangements ensure children are removed from potential risk within their own homes. The quality of care is monitored in all placements. The safety of the child is always paramount.

“We certainly had expectations that the MOU report would present viable solutions for meaningful change in the fishery,” —Kathy Dunderdale

5. According to Statistics Canada Newfoundland is the province with the most obese adults – as much as 35%. Can you speculate as to why this is, and what can be done about it?

The Provincial Government is actively addressing the issue of obesity through several key initiatives. The Provincial Wellness Plan, for example, provides an annual investment of $4.1 million to help improve the overall health and wellness of the province’s population. Focus areas include healthy eating, physical activity, tobacco control and child and youth development.

In addition, the Provincial Government’s recreation and sport strategy, Active, Healthy Newfoundland and Labrador, released in 2007, aims to increase participation in recreation, sport and physical activity. Through the Department of Tourism, Culture and Recreation, approximately $5.8 million in annual funding goes to programs and initiatives which support the objectives of the strategy.

6. In light of the new social media tools available to our society, the willingness of citizens to do more with OUR government than simply voting once every four years; does your government have any plans for increasing citizen engagement in government decision-making?

Our government believes in engaging residents to inform our decision making and to ensure we are responsive to the needs of the people we serve. Our creation of the Rural Secretariat is just one initiative that reflects the high priority we place on engaging our residents. The Rural Secretariat was created by our government to focus on issues facing rural areas of our province, a big part of which involves engagement with the public and collaboration with stakeholders. This is facilitated by nine regional councils which submit policy advice to the Provincial Government.

We also regularly conduct stakeholder and public consultations. Some recent examples are the round-table discussions with post-secondary student representatives, consultations on developing the Provincial Mineral Strategy, and the budget consultations, taking place all around the province. Social media is also being used in many ways throughout our government and we plan on increasing its use.

7. Which, if any, communities in Labrador will get Muskrat Falls power as a replacement for diesel-generated power?

Diesel generation continues to be the least-cost option to provide electricity to customers in coastal Labrador. But we will look at running lines to the north and south coast if that becomes a more cost effective option. In the meantime, we are looking at the potential of small hydro sites to meet the energy demands of select coastal communities.

Muskrat Falls is the most cost effective option to meet the energy needs of our province. It will bring stability to electricity rates with lower costs for consumers over the long term and avoid the volatility of oil-reliant power. It will provide clean energy, while also providing tremendous economic benefits. Power from Muskrat Falls will be available to meet the growing electricity needs of Labradorians and increased demand related to industrial development, thereby improving Labrador’s ability to attract industrial development to the region.

Of the 8600 direct person years of employment generated by the development of Muskrat Falls, 5400 will take place in Labrador. Approximately $450 million in labour earnings and business income will be generated for Labrador residents and enterprises.

“We will look at running lines to the north and south coast if that becomes a more cost effective option.” —Kathy Dunderdale

8. How do you feel about the change of the province’s official name from Newfoundland to Newfoundland & Labrador?

I can’t imagine a name different than Newfoundland and Labrador. Our province’s name has been officially changed for several years now and it best reflects our province and its two main geographical areas.

Hydroelectricity through Muskrat Falls is a better source of power because it is less costly and will help support the development of wind power in the future. Nalcor constantly evaluates different sources of generation for Newfoundland and Labrador and the best energy project to meet the current growing demand for electricity is Muskrat Falls. Nalcor’s wind strategy will focus on advancing wind development opportunities in the province in conjunction with the Lower Churchill Project and existing hydroelectric projects. Nalcor will also assess opportunities to market wind power in the broader North American marketplace.

10. We have major problems with our democracy. Many people do not know the difference between a federal and provincial representative, and many more who do know the difference do not feel it is worth their time to vote in elections. Will your government re-introduce a civics class in our public education system so that every student learns the basics about our democratic system?

I feel that every eligible resident should exercise the right to vote. We are very fortunate to live in a democracy, which is envied by so many in other parts of the world. Ensuring our students are knowledgeable in areas of governance and citizenship is so important, and these areas are part of the social studies curriculum for K-12 students.

Instruction starts in Grade 3 when students examine the purpose, function and structure of governments in Newfoundland and Labrador; examine the rights and responsibilities of citizens, and are introduced to the concept of how citizens participate in public decision-making. In Grade 4 they study the political landscape of Canada, including the purpose, function, and structure of the federal government.

These concepts are reinforced in Grades 7, 8 and 9, and again in high school in such courses as Canadian History 1201, Canadian Law 2104/2204,Canadian Economy 2203 and World History 3202. The high school graduation requirements also include a 30-hour community contribution component, which also allows young people to demonstrate and experience what it means to be a good citizen. 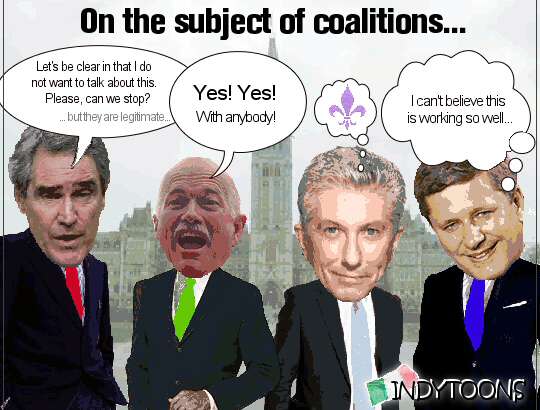