“Your people are here”: Pride Celebrations Across NL

Meet the people making Newfoundland and Labrador a friendlier, gayer, and more inclusive place for everyone.

In 2018, Labrador West Pride hosted its first-ever drag show. Labrador West Pride rented out Jarge’s Pub, a small bar in Labrador City, and performers dressed up in drag costumes that they had sewed themselves. They had no idea how the show would be received, or if anyone would show up at all.

“We were all like, it’s gonna be either a bust or a boom,” organizer George Lim tells The Independent. “It’s either one person sitting, or it’s gonna be full.”

Five minutes to showtime, the performers were gathered backstage, behind the curtain. They decided to peek to see if they would be performing for an empty room. They were shocked by what they saw—the bar was packed!

Lim says that the bar was so full that they had to turn people away. People were lining up outside just to get a glimpse of the drag performers. Labrador City is a relatively small town, and Lim says that the community really came together that night.

2SLGBTQIA+ Pride in most of Newfoundland and Labrador is a far cry from the corporate-sponsored Pride festivals in places like Toronto and Montreal, which have huge budgets, are attended by hundreds of thousands of people, and feature elaborate parades and parties on city streets. Even in St. John’s, Pride week has become a major event that—despite the occasional controversy—seems to grow every year.

In smaller communities, Pride festivities are more modest, and are often organized by teams of grassroots volunteers.

The Independent spoke with organizers behind Pride festivals in towns across Newfoundland and Labrador. These organizers told us about the importance of Pride in their community, and what makes their celebrations unique.

In a small town, it can be even more difficult than usual for members of the 2SLGBTQIA+ community to be open about their identities. Meet the people making Newfoundland and Labrador a friendlier, gayer, and more inclusive place for everyone.

Labrador West Pride is based in Labrador City, but also includes communities like Wabush, Fermont, and Churchill Falls. This year’s Pride week is happening from August 2 to 9, and will take place mostly online.

Lim, who moved to Labrador from Ontario, says that Labrador West Pride helped him feel comfortable in a new environment.

“It was a very good feeling that I was welcome,” Lim says.

This year’s celebrations are largely virtual and are still being finalized. The organization is partnering with local government, community organizations, and local businesses to raise the rainbow flag and paint some rainbow cross walks.

Lim fiercely disagrees with the idea that these symbols of Pride are empty gestures. He says that they serve as a “beacon” for 2SLGBTQIA+ people who are feeling isolated.

“Our focus for this year is just sending out the message of inclusivity,” he says. “If we can even make a slightest change to anyone’s life to make it better, that’s just enough for us.”

Jade Rachwal is a volunteer with Safe Alliance, an organization based in Happy Valley-Goose Bay that provides information and resources to 2SLGBTQIA+ people across Labrador.

The organization has events and initiatives all year long, not just during Pride week. Before the pandemic began, it began holding “Pride Coffee” events for members of the 2SLGBTQIA+ community to get together and chat about their experiences.

Safe Alliance has been holding Pride celebrations since 2010, and putting off a fully-fledged Pride week in the Lake Melville region since 2016. This year, organizers plan to hold at least some events in person with social distancing protocols in place.

Events this year include a movie night, a poster making night, and Rachwal’s favourite event: a “Pride at the Beach” boil up.

“That’s something that everybody loves to do in Labrador,” Rachwal says.

Andrew Hibbitts is the chair of the Bay St. George Pride committee, which encompasses Stephenville and the surrounding communities. Their 2021 celebrations are happening from June 22 to 28.

Although Bay St. George Pride 2021 will be entirely online, Hibbitts says that this year’s schedule is most ambitious one yet.

“We’ve never had this many events during a Pride week,” Hibbitts tells The Independent.

Hibbitts explains that going completely virtual allows the committee to be more creative and include more people and communities.

Hibbitts says he’s most excited for the “Inner Diva” event being held in partnership with the Women’s Centre. The workshop, which is focused on self-care, will be hosted by a drag queen.

The schedule also includes an online supper party, drag storytime, an education session focused on Stonewall, and much, much more.

“I think you can really feel the energy here and in this region,” Hibbitts says. “There’s a larger population of LGBTQ in rural Newfoundland than people realize.”

Up north, Corner Brook-Bay of Islands Pride events are also happening mostly online. The organization is hosting several events in June, including a virtual parade on June 27 and a diversity presentation in partnership with Community Mental Health Initiative on June 21.

In Grand Falls-Windsor, events will be held both online and in person, and are being spread out over a month.

This year, organizers are planning a Zoom event for youth, a Virtual Rainbow Storytime for children, an outdoor “Rainbow Scavenger Hunt,” and other festivities to be announced on social media.

“Grand Falls-Windsor Pride works to celebrate the progress made in the Pride movement while recognizing the fact that there is much to be done in the fight for 2SLGBTQ+ equality,” chairperson Rebecca Blackmore told The Independent in an email.

In Gander, Violence Prevention Gander and Area (VPGA), the Gander Women’s Centre, and Cara Transition House are working together to set up an official Gander Pride committee. Volunteers have already painted a rainbow crosswalk in front of Gander town hall.

VPGA is an organization that advocates for individuals experiencing violence, including members of the 2SLGBTQIA+ community.

“Members of marginalized groups, like those in the 2SLGBTQIA+ community, are more likely to experience physical and sexual violence, so that that in itself says that Pride is super important,” executive director Courtney Stoyles says. “They need time to show that they deserve to take up space and deserve to be here.”

More details about Gander Pride will be announced soon.

Trevor Taylor is the co-founder and co-director of Fogo Island Pride. This year, festivities are taking place both in person and online from August 8 to 14.

Pride week will include a community barbeque, a drag show, virtual queer trivia, and a bonfire night.

Fogo Island Pride is holding an Enigma Mystery Art Auction to fundraise for the festival. Participants will be able to bid on art pieces via Facebook with proceeds being divided between Fogo Island Pride, the artist, and to a yet-to-be-determined community organization.

Taylor pushes back against the notion that Pride is no longer needed and 2SLGBTQIA+ people are not marginalized.

Taylor founded Fogo Island Pride in 2019 with his partner, Evan Parsons, because they saw a gap in representation for queer people in rural areas. He noticed young 2SLGBTQIA+ people moving away from home to urban places where they felt comfortable coming out.

“We knew that there queer people in the community, but the voice just wasn’t there,” he says.

Fogo Island Pride is meant to create a space for 2SLGBTQIA+ people across Fogo Island to be themselves while still living at home.

“I think it’s exceptionally important to make everybody know that there are people here. Your people are here.”

How is your community celebrating Pride? Send us an email: [email protected]

Darrell Roberts is a writer and reporter from St. John's. He enjoys reading and writing about community and culture. 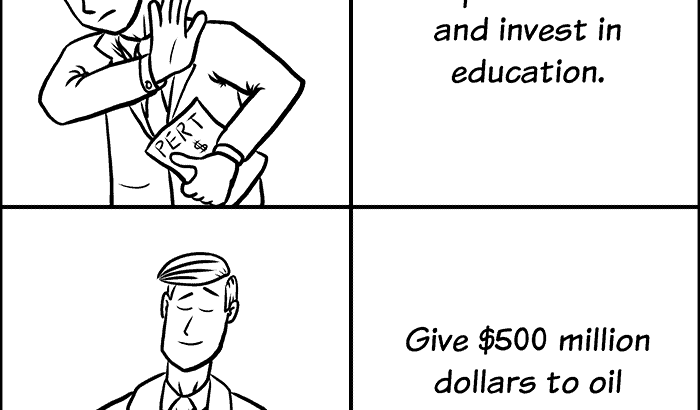 Board of Trade Outlook 2021, Day 1: Trudeau Keynote
Prime Minister Justin Trudeau was long on the pre-election optimism—and short on details about Muskrat Falls negotiations with the province.