“…the Great War simultaneously created a country and destroyed it…”

In the decades before 1914 Newfoundland completed a trans-island railway, introduced a Gulf ferry service, opened mines and mills across the island, and modernized its merchant marine with new steel steamships built in the United Kingdom. It appeared to be a time of relative prosperity, but there were problems. The fishery was suffering a steady decline, and the railway was bleeding money. Despite pockets of industrialization the colonial economy remained almost entirely dependent on a failing salt fishery. The war seemed to encourage a minor recovery. The fishery reversed its pre-war decline as European fleets disappeared from the Grand Banks and demand for salt fish soared. There was also intense demand for iron ore and pulp paper. Non-military government spending increased as more revenue was generated, and merchants, flush with cash from the export of fish, reversed their pre-war efforts to diversify investments.

But for many the war was also a time of deprivation and even persecution. In St. Anthony, for example, war conditions had so depleted the resources of the Grenfell Mission that doctors were “compelled to leave the people almost entirely to take care of themselves in their moment of direst need,” someone wrote anonymously in the Jan. 1921 issue of the Grenfell journal ‘Among the Deep Sea Fishers’. The war drove up prices for fishing gear, coal and provisions, and was widely regarded as evidence of profiteering by Water Street merchants and the NPA. For the outports, every man that went to war meant one less hand in the fishery, and when St. John’s began to push for conscription later in the war there was widespread resentment. On the north-east coast the Fisherman’s Protective Union was expected to oppose conscription, but William Coaker, hoping to secure his agenda for fisheries reform and modernization, chose to support it instead. The decision was necessary, but inflicted irreparable damage on Newfoundland’s most promising political organization.

Nor did the country benefit from any industrial growth or diversification; and so, unlike the experience of Canada, the United States and Britain, there was no expanding industrial economy for women to find work in. However, this ignores the important position women held in the family-based inshore fishery, a position that was not diminished because of the war. While some women volunteered for the medical services overseas, many more joined the Women’s Patriotic Association (WPA), raising funds for military equipment and sending parcels of socks and garments overseas. After the war, the WPA used its surplus funds to establish a rudimentary social support network in St. John’s, providing poor mothers with milk canteens and medical clinics, while they also succeeded in convincing the colony to guarantee at least a modicum of government support.

Like the Canadian and British press, Newfoundland papers ran stories about ‘Prussian militarism’ and the imminent danger of a German invasion. Germans were branded as disloyal and dangerous, and members of Newfoundland’s German community, as well as German sailors in Newfoundland waters, were arrested and detained in hastily improvised prisons. Indeed, as Gerhard Bassler argued, “In Newfoundland, unlike in Canada and the United States, people with the remotest German association were treated as suspects.” But outside of St. John’s wartime propaganda was less pervasive. In most outports news arrived at the local post office by telegraph where it was copied onto books and posted for public viewing. one resident of the Eastport Peninsula, Bonavista Bay, recalled his attempts at ten years of age “to read the war news to some old man, who either had a son fighting in France or perhaps serving in the British Navy.” “I have no doubt now,” he wittily continued, “but that new pronunciations were given to many of those mysterious French place names. I do remember that at the end of the news we both tried to decide who was winning, a difficult task sometimes.”

Victory in November of 1918 vindicated some of the suffering, but it did not effect lasting positive change at home. However, for a time people cautiously believed that a modern country would rise from the wreckage, a Newfoundland fair to its people and capable of holding its own in the new world. Support also had to be provided to the thousands of returning soldiers, sailors and auxiliaries, both because it was owed to them and, to a lesser extent, because of their potential for social instability.

From all corners there were ambitious proposals for housing programs, a national shipyard, agricultural development, a university, and state employment for veterans. The government did establish a reasonably effective system of demobilization and reintegration, providing men with transport home, a clothing allowance, some medical coverage, and access to education and vocational training, public sector employment, and a small pension. And there was the university. With the support of the Carnegie Foundation, Memorial College fulfilled a longstanding need for university education in Newfoundland. The university, in effect an “academic monument,” stands as perhaps the finest achievement of post-war Newfoundland society and is one of the lasting legacies of the First World War.

Sadly, the war also left the colony with massive debts that it could never hope to honour. European competition returned to the Grand Banks and the price of fish collapsed. Class divisions remained firmly intact, unemployment and labour unrest grew, and many veterans were left vulnerable despite the government’s efforts. Veterans from the Lake Melville area of Labrador, for example, were carried no further than Battle Harbour where they were expected to wait for the winter freeze to complete their journey home. Widows and their families were not initially covered by pensions and many disabled veterans had their medical claims rejected. One veteran, crippled by a disabled hand, was denied his coverage because, as his doctor wrote, he had “some slight movement in the thumb and fingers, which to some extent is useful to you, and better than being without a hand.” Others were simply beyond the help of the state, their lives forever shattered by their experience in France. Worse, there was visible evidence of wartime profiteering, such as the growing number of private cars on the streets of St. John’s. A bitter Hubert Ridgely could only write of “man’s ingratitude to man” after learning of the fortunes made by a few on the war market and the added indignity of a “deplorable” homecoming. Another veteran wrote in The Telegram: “The old order remained, more firmly entrenched than before and more greedy. The new spirit stormed these trenches… in vain.”

Veterans sought to place themselves at the fore of public remembrance to validate their suffering, make sense of continuing inequalities, and to secure the rights they felt were owed to them for their service. The Great War Veterans’ Association of Newfoundland (GWVA) was created to secure employment and better pensions for its members, and to provide a social safety net for the disadvantaged families of killed or wounded veterans. But it also quickly consolidated control over all aspects of public remembrance: Memorial Day ceremonies and parades; granite monuments from the Beaumont Hamel Memorial Park to the National War Memorial; and the production of short battlefield histories for public consumption, most of them distributed in the GWVA’s official organ The Veteran. Their efforts helped consolidate a narrative of almost impossible bravery, perseverance, and the unmatched imperial loyalty of Britain’s “ancient colony.” Unfortunately, the Ancient Colony, for all its suffering, was not even offered a place at the Versailles Peace Conference.

The war drove up prices for fishing gear, coal and provisions, and was widely regarded as evidence of profiteering by Water Street merchants…

The Great War encouraged a sense that Newfoundland became a country between 1914 and 1918 (albeit one that remained firmly in the imperial fold), or at least that the war lent its people a set of characteristics that were unique and identifiable to themselves. Popular memory, years of exposure to wartime propaganda, “the intense engagement of the entire population in a total war,” and the ceaseless efforts of veterans, the church and the press further consolidated this myth. In many respects Newfoundland did emerge with a sharpened sense of self, but the crippling cost of victory also precipitated a period of long decline and the collapse of responsible government. In this sense the Great War simultaneously created a country and destroyed it, and this complicated legacy has persisted ever since. Regardless of how much damage was inflicted by the war, however, Newfoundland’s pre-war political and economic arrangements were not encouraging either. Dependent on a single, poorly managed resource and an exploitative credit system, there is little to suggest that Newfoundland was growing into a viable state of its own.

Another legacy of the war, one that pertains to all those involved, was the abrupt and painful termination of another, somehow gentler world. The Great War was a ‘total war,’ with all the destruction and ruthlessness the people of that time were capable of mustering. But unlike 1939, when Europe steeled itself for a similar conflict, in 1914 there was no history of industrial violence and no expectation of such a traumatic kind of war. By 1915 those illusions had been permanently shattered. An exasperated British field marshal complained “this isn’t war! I don’t know what’s to be done,” while the poet Philp Larkin wrote simply: “Never such innocence again.”

Tead Part I of this Remembrance Day feature here.

John Matchim studied history at Memorial University and lives in St. John’s. He is a devoted follower of the Montreal Canadiens, Liverpool FC, and is a purveyor of lazy history. 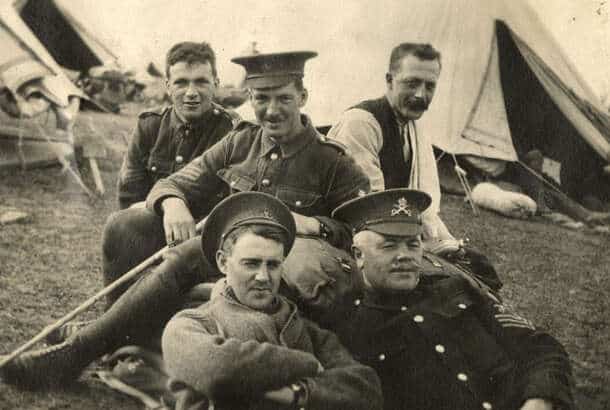