“All spectacle and no substance”

Beyond the colourful media coverage and incriminatory political punditry that have turned Kathy Dunderdale’s resignation into the biggest story of the year, is that other story that isn’t going anywhere: reality

The end of Kathy Dunderdale’s premiership made for some compelling drama and news coverage last week. But the fact remains that the province’s social, cultural and political fabric has been woven by the policies and actions of Dunderdale, her predecessor Danny Williams, and previous political leaders and governments, into a plan that includes no clear vision for those who will inherit post-oil Newfoundland and Labrador.

Power and Dissent columnist Jon Parsons on “The Spectacle”

Dunderdale’s resignation is significant, in the same way it is significant for an actress to be written out of a TV series most people don’t watch. Politics in NL is all spectacle and no substance, and nothing about that will change because a figurehead happens to resign. Take for example the reasons cited for Paul Lane’s defection and, to some accounts, the reason for Dunderdale’s resignation: failing to connect with the public, poor optics and spin – in a word: image.

None of this is to do with the substance of the issues facing the province today, just as Paul Lane, in discussing his defection, had nothing to say about being ideologically at odds with progressive conservatism and aligned with liberalism. Further troubling is that this base level of spectacle is eagerly consumed by much of the media and by the political pundits who dutifully play their role in writing Dunderdale out of the script, missing (or at least not discussing) the real issues and ideas, which are just a subplot to a drama with all the intricacies of Days of Our Lives.

To Each Their Own columnist Hans Rollmann on the “Anti-Climax”

Dunderdale’s resignation is celebrated by many – perhaps because it’s been so long since this province has had anything remotely worth celebrating at all – but as the social media fireworks draw to a close there lingers a troubling sense of anti-climax. All the bad laws and policies remain on the books; all the laid-off workers remain unemployed; the province’s trajectory remains unchanged as it continues to hurtle headlong on an extravagant energy-based gambling trip. The people who brought this about remain in office, even if one of them now has a slightly smaller office. It’s hard to tell what’s actually worth celebrating here.

Unless the interim leadership dramatically alters course, rescinds laws, and takes firm action to reverse the widely condemned misdeeds of recent years, then what we are left with is a new leadership which shares equal responsibility for everything that went wrong under the old leadership, along with the additional culpability of having failed to publicly (or privately, with any effect) question or challenge any of their government’s policies on behalf of the constituents they’re supposed to represent. And whose only real achievement, in the end, has been a bit of back-room conniving against their own leader (which they lacked even the courage to do until she was away on vacation).

View From the Mainland columnist Brandon Pardy on Labrador

The resignation of Kathy Dunderdale has little immediate impact on the political landscape in Labrador. There are a few side impacts, as you might suspect, that will spill over into other areas. One clear question is how this may impact Muskrat Falls.

Failing provincial governments, as I’ve mentioned in previous columns (i.e. here, here, here and here), are often characterized by arrogance and political contempt for voters, especially in rural regions, and especially in Labrador. There are, as you will see on Facebook and elsewhere, growing growlings about the Labrador Party and even separatist sentiments (i.e. The “Free Labrador” and “LABRADOR INDEPENDENCE” FB groups). This might even manifest as a political front during the lead up to the next election. In the least, this changes the state of play for the major parties. This isn’t new, it’s a trend. The only time this Labrador independence didn’t manifest politically at the end of a long party reign in this province was the 1990s.

Again, this is a side effect, not directly related to Dunderdale stepping down. But weakness and instability in island politics usually means the major parties are busy down there, not up here. Public rabble are often political opportunists, but the general public also reacts to being ignored. This will affect the next year and a half of Labrador politics. Just watch.

Unless a new premier starts making amends for backstabbing the Labrador Metis Nation (read Danny’s Oct. 8, 2003 letter to the LMN during his campaign, then his Feb. 4, 2004 press release as newly elected premier) – now the NunatuKavut Community Council – that cause will erupt at the poll booths. As well for Nunatsiavut and their Land Use Plan.

Heaven help the new premier if the Inuit, like the Innu, start hunting caribou during this politically sensitive time.

On a government behind the times

The thing that’s struck me about politics in the last 10 years – and it doesn’t matter if you’re talking about Liberals or Conservatives or New Democrats – has been the extent to which people have been talking about mostly issues and ideas from the 1970s. I’m as big a fan of nostalgia as anybody else but the world has changed a lot since the 1970s and the situation we face today is very, very different than it was (then).

I think more often I have been astonished by the extent to which politicians have been denying things, like changes in the population. The (new) auditor general’s report highlighted the demographic challenge very particularly. If you’re looking at places like the northeast coast and central Newfoundland generally, it’s being hit quite hard by a rapidly aging population, where it’s going to get difficult in a lot of communities to deliver basic public services (like) garbage collection and volunteer fire departments. When the average age is more than 55 in the community it’s that much harder to provide a lot of those services … Government hasn’t spoken to any of that. Actually, I don’t think you’ll find a politician who’ll be willing to talk about it, for the last 10 years.

If you look at economic development, it’s all fine, well and good to talk about these wonderful mega-projects that produce certain benefits, but in the meantime we haven’t seen any innovation and government hasn’t been very keen to encourage (community-based) development. They’ve been more keen about control and stopping people from doing things than they are about letting people innovate, even down to the point where living in (a rural town) you have a limited capacity to generate electricity by other means. You can’t power your house…other than buying it from hydro. Those are really restrictive ideas, but there is a great deal of interest in alternative energy. There is a great deal of interest in a whole bunch of ideas.

On our changing self-perception

There are all sorts of broad social policy issues. The reality is that Newfoundlanders and Labradorians, they are much more cosmopolitan, much more global and outward-looking than they’ve ever been, and yet we’ve had a government for the past 10 years that…has (been) xenophobic and inward-looking. I think we’ve seen a mood amongst the population that’s quite different. I’ll be interested to see which of the political parties, if any, start redefining Newfoundland to come a little closer to the Newfoundland and Labrador that I think is out there, and the Newfoundlanders and Labradorians who…move easily among different cultures, and who in their homes and communities here are as welcoming and open to foreigners and new experiences as anybody anywhere on the planet. That, I think, is a positive strength (and) it’s been instantly the source of a great opportunity, economic and otherwise.

There’s been a fundamental transformation of the people of this province over the last 30-40 years, and I think we need some more discussion generally in our community that reflects where we are today and who were are today, as opposed to who we were in the 1970s.

On control of information and the need for healthy, public dialogue

I don’t think anybody’s tackled those ideas of openness and inclusiveness. The Tories have talked a little bit about innovation, but you can’t have innovation without freedom, particularly freedom of information. And they’ve been doing their best to restrict and limit and control information. You can’t have an open and inclusive and innovative society without free speech, and we’ve had a decade of politicians trying to shut down alternative points of view.

You can’t have an open and inclusive and innovative society without free speech, and we’ve had a decade of politicians trying to shut down alternative points of view.  – Ed Hollett

Politicians need to be much more willing to involve people and involve the communities in discussions about major policy issues like (fracking) well beforehand, so that there’s information-sharing that has to go on with any issue. And I don’t think we’ve seen that kind of leadership from politicians for at least the last decade. We’ve seen way too much emphasis on stock talking points and being very defensive and restrictive, as opposed to talking about what kind of society we want five, 10, 15 years from now. Tom Marshall, ironically enough, said that about three or four years ago, and then nothing happened.

I don’t think any of us have an answer, but I think we need to have that conversation. Are we the kind of province, today, that would tolerate the kind of anti-Quebec hysteria that the Tories were perpetrating in 2009-2010? That’s the kind of stuff I’m talking about. I don’t think we’re those people, and I think times have changed significantly. We have to have some serious discussion about what we value. Are we a place where we believe in freer enterprise, or (one) where we’re gonna close down and have everything run by a government monopoly at a tremendous expense, which is Nalcor energy?

We’ve been used to (having) things made for us and now we need to get our hands dirty and start running the place again as ordinary Newfoundlanders and Labradorians.

We use what we generate
Electric heating is old technology that's bad for us and the environment. If we want to become energy secure, we must first appreciate there's more… 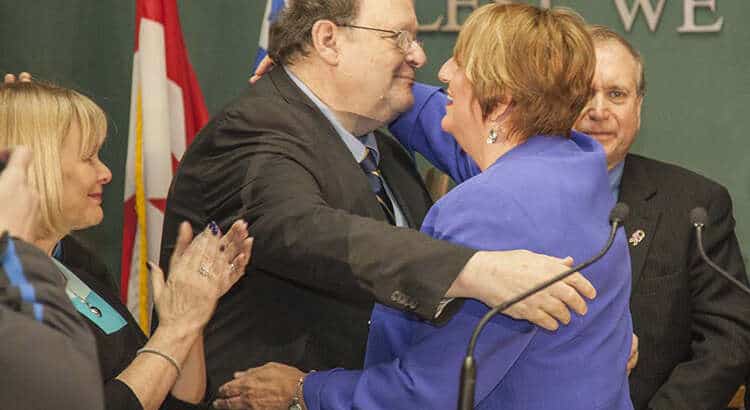 It was the best of times, it was the worst of times (all over again)
Kathy Dunderdale's legacy is a complex one, but one thing is clear: the PC government must dramatically shift course