Thinking Outside the Crisis: Throwing Off Our (Food) Chains﻿

The supply chain is not a series of equal links dependent on the ‘weakest link’ to operate. Rather, the middle is a choke point over the food supply.

This article is part of the Independent’s ongoing series, Thinking Outside the Crisis. Read Robin Whitaker’s introduction here.

If we’ve learned something, it’s about supply chains.

As we live through the COVID-19 pandemic and the ensuing public health crisis, among the most urgent and pressing questions are: Will we run out of food? Will the food supply chains hold or will the links be irreparably broken by the pandemic?

First, there was the concern for toilet paper, then the Oceanex threat. More recently, the focus has been on the meat supply, as plant workers sicken and slaughterhouses become hot spots for COVID-19. On the one hand, dairies are dumping milk down the drain and farmers plowing vegetables back into the soil. On the other hand, unprecedented lines at food banks tell us that the hungry are going without. It seems clear that the food supply is under threat, with the headlines warning that COVID-19 is breaking the food supply chains. Industry appears to agree. The chair of Tyson Foods, one of a handful of large meat processors in the US issued an advertisement stating: “The food supply chain is breaking.” Soon after, Trump ordered meatpacking plants to stay open, putting “low-waged labour force of racialized and often exploited workers” in dangerous and deadly positions.

While it may seem that COVID-19 has produced an acute crisis, thinking outside that immediate crisis, the food system has long been broken. Food insecurity is part of daily life in Newfoundland and Labrador, and globally food insecurity has been on the rise since 2015 after years of decline. The stories of food waste are merely the tip of the iceberg: waste is built into the industrial food system, with the UN’s Food and Agriculture Organization reporting that one-third of all food is discarded. So while videos showing the destruction of food are dramatic, the phenomenon is nothing new.

Indeed, despite widely reported concerns over the effect of COVID-19 on the food system, the FAO reports there is enough food, and the pandemic is unlikely to have a significant effect on the global food market, while recognizing there may be some localized issues. Specifically, COVID-19 may “pose challenges to food supply chains.”

Rather than asking ‘will we run out of food?’ the apparent crisis presents an opportunity to step back and to reframe how we understand and describe food systems.

I would argue that the term supply chain—and the associated claim that supply chains are ‘broken’—obscures more than it reveals. More precisely, the description of supply chains constrains our ability to imagine a more emancipatory and just food system. The term supply chain obscures our complex and vital relationship with food,and has the effect of depoliticizing a very political and powerful set of relationships—one with winners and losers.

In short, the supply chain is not a series of equal links that is dependent on the ‘weakest link’ to operate. Rather, the middle is a choke point (pun intended) over the food supply. So when the chair of Tyson foods claims that the chain is broken, the question is: for whom is it broken? Describing the food system as a chain lets the most powerful off the hook by diverting our attention to the so-called weakest link.

In the early twentieth century, agrarian movements such as the Grangers in the US, or the cooperative movement in Canada resisted the middlemen (grain traders, millers and railways) who controlled food supplies. Similarly, in early twentieth-century Newfoundland, the Fishermen’s Protective Union, particularly through the Fishermen’s Union Trading Company, sought to shift control from merchants to fishers in line with the FPU rallying cry: “To each his own.” In these movements, the middleman was identified as a barrier to the social and economic welfare of the agrarian and working class. At the time, social movements called for the “elimination of the middleman” and worked to forge new economic organizations such as farmer cooperatives and grain pools.

The state stepped in with legislation, regulations and other supports to foster cooperatives and other marketing protections. The state also intervened during World War I and bent market arrangements toward the war effort. For example, during the war, US Food Act set aside the middleman, which “practically put out of business this whole group of middlemen at the terminal markets, so far as trading in these grains was concerned”. Instead, the state controlled the market and constrained speculators and middlemen (often depicted as one and the same). In Canada, the Canadian Wheat Board had a trial run during WW1, and was established again during the Depression. State control designed to secure fair prices for farmers and supply for the market was seen to be in the national interest.

As neoliberal policies eroded these protections—for instance, disbanding and privatizing the Canadian Wheat Board—the middleman seems to have been subsumed into ‘chains.’ And herein lies the problem. The middle is where the control and action occurs. Extreme corporate concentration at the centre of the industrial food system makes the system very brittle and rigid and consumers very vulnerable.

Consolidation in the meat sector, for example, means fewer and larger slaughterhouses. The political power of oligopolies has led to terrible working conditions and an easing of food safety protocols that slow down the lines. In fact, processing speeds in the US were recently allowed to increase. The intensity of production means that there is no room for social distancing in the plants because “spacing people out slows production speed and eats into profits.” Under the intense production pressure, workers’ safety and wellbeing is set aside. Many readers will point to Upton Sinclair’s 1906 novel, The Jungle, and say it was always thus. But there was a moment when meatpacking jobs were unionized, well paid and safe—even providing a route to the “American Dream.”

You Can’t Eat Equities for Dinner

Not only is there extreme corporate concentration in the middle, there is also the increased activity of financial actors. Through increased dependence on credit/debt relations, financial actors are increasingly shaping agricultural markets, and therefore what we are able to eat for dinner. Rather than supply chains, we have “chains of dependency, with smallholders entering markets over which they have no ultimate control.” The financialization of food and agriculture is widespread and it is negatively affecting the environment, feeders, and eaters.

Thinking outside the crisis also creates an opportunity, not only to reimagine and complicate our understanding and turn away from ‘chains’ and their brokenness, but to look at reasserting and reanimating our relationship with food in new and imaginative ways. First, these chokepoints are vulnerable to labour actions, and that potential should be leveraged. Second, we must challenge the state’s on-going support for large corporations, which is rationalized through deference to efficiency, but contributes to brittle and vulnerable supply chains dominated by a few powerful players.

The early twentieth-century political economist Thorstein Veblen provides some helpful tools to think about efficiency. In an essay, he examines the word sabotage, which derives from ‘sabot’ or wooden shoe and means dragging, going slow. In the US, industrialists would use accusations of sabotage to discredit workers’ actions as radical and violent. But French workers used the term to mean a “passive resistance,” and “bungling obstruction,” according to Veblen. It is a tactic of “malingering, confusion and misdirection of work,” the opposite of efficiency.

Veblen’s key intervention was to point out that employers also used sabotage as a tactic, or what he termed “capitalistic sabotage” to control output—for example, to create surpluses or shortages. A more recent intervention by scholars shows how the idea of logistics is premised on efficiency, but actually works as a form of capitalistic sabotage. Logistics and calls for more efficient supply chains work as a containment strategy as well as a strategy to foster trade and commerce. Supply chains are perfect choke points to engage capitalistic sabotage and the “conscious withdrawal of efficiency” in order to control industrial output.

Our conceptions of supply chains constrain how we can think about the possibility of an emancipatory relationship with food, and how our idea of ‘chains’ both frees middlemen of responsibility and hems in or otherwise limits alternative arrangements. In turn, the problem becomes the ‘weakest’ link. Concerns about food crises and “disrupted supply chains” focus our attention on maintaining these structures, usually governed by very large transnational corporations, when instead we might ask: who is benefiting from this maintenance of the status quo? Who is losing? And how could we do things differently?

Sarah J. Martin has worked as a cook, chef and meat cutter in a variety of settings from cafeterias to high-end restaurants to remote logging camps. She is an Assistant Professor in the Department of Political Science at Memorial University, and co-edited (with Ryan Katz-Rosene), Green Meat: Sustaining Eaters, Animals and the Planet, which was released in April 2020 with McGill-Queens University Press.

My Skin Colour is Not a Threat﻿
It’s easy for white people to deny that racism exists in Newfoundland & Labrador. Black people in this province can’t afford to think like that. 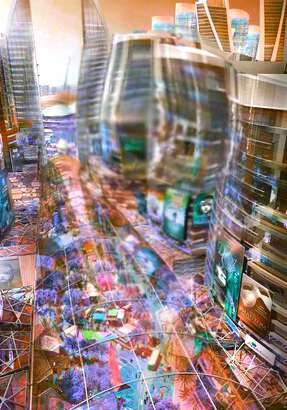 Thinking Outside the Crisis: Out of What Exists
It's not too late for Newfoundlanders and Labradorians to write a new, original story—our story, our future—from the ruins of the present moment.