On Friday about 150 people rallied in Corner Brook against the Liberal government’s austerity budget as part of a province-wide day of action.

Qalipu Mi’kmaq First Nation Chief Brendan Mitchell and members of the Mi’kmaq community led the march from Margaret Bowater Park to the Sir Richard Squires provincial government building, where several people spoke, including Sofia Descalzi of the Grenfell Campus Students’ Union, who called the budget “oppressive” and an “attack on youth in this province.”

“How are these institutions going to train skilled workers to take on jobs and revive the economy of this province when the government is saddling the students with massive debt while also targeting the most vulnerable ones?” she said, citing changes to the recently-implement loans-to-grants program.

Descalzi said the Liberals’ budget will force students to take on an additional $6,000 in debt over the course of their degree, and that the student unions’ concerns shared with Advanced Education and Skills Minister Gerry Byrne during recent meetings are falling on deaf ears.

“Prior to the budget we met with Minister Gerry Byrne, but our calls for a fairer system of post-secondary education and a stronger economy has been silenced and ignored,” she told the crowd.

“We were faced with a brick wall and no real answers were given. It was only the same old condescending rhetoric, so we keep taking action and we will keep doing so until this government listens.”

Byrne and Humber–Bay of Islands MHA and Minister of Municipal Affairs and Service NL Eddie Joyce spoke at the rally, but were shouted down by angry residents.

“I appreciate all the emails, all the messages,” Byrne announced to the visibly aggravated crowd. “There have been all sorts of different messages that have come forward…but when we look at all of this, we are still, even this year, no matter what happens — we’re going to carry a huge, huge debt load, each and every one of us. So really the question is, do we kick the can down the road a little bit—”

Before he could finish his sentence Byrne was interrupted by protestors, who offered an answer to the province’s fiscal woes: “Tax the rich! Tax the rich!”

Moments later Joyce stepped up to the microphone in an attempt to justify the government’s austerity program, which includes higher taxes and fees almost right across the board, as well as the closure of more than half the province’s libraries, reduced healthcare and education services, the elimination of 24 snow clearing, and the Deficit Reduction Levy, which disproportionately taxes—relative to higher income earners—workers earning as little as $20,000 a year.

“People are saying, we won’t forget. And I will say here now, I will listen but I will do what I feel is best for the province. If it means that I don’t get elected again, so be it,” he told the crowd. “But I will not bury my head in the sand and say that we do not have a major problem on our hands.”

Jade Kearley of the Community Mental Health Initiative told the crowd the budget will negatively impact low-income individuals and families and “take money out of the pockets of those who need it most.”

Kearley talked about the link between mental health, poverty and stress, saying people are “already having to work two or three jobs just to make ends meet now,” and that when her organization tells people to “exercise, spend time with family, do things that make you happy…it’s going to be very, very challenging for people to do that” in light of the budget.

“This really is a budget that’s for the rich, by the rich, and that’s not a lot of us Newfoundlanders and Labradorians,” she said.

Paula Sheppard Thibeau of the Corner Brook Status of Women Council cited the large wage gap between men and women and reiterated the claim that the budget will disproportionately impact women.

“Women are the largest users of services and when services are cut women are impacted the hardest,” she said. “This austerity budget cuts services such as health care, education, literacy, justice and other social supports. Cuts in basic literacy and education through closing libraries in our rural areas is not the answer. Neither is cutting preventative health services such as breast exams and dental services. Waitlists for services will continue to grow and work loads will increase for those working on the front lines.”

Qalipu Mi’kmaq First Nation Chief Brendan Mitchell told the crowd that he was asked by many in the Mi’kmaq community to speak out against the budget.

We’re all pretty forgiving and we don’t have a problem with the premier changing his mind about this. — Qalipu Chief Brendan Mitchell

He said many in the province are living on or near the poverty line, and that the measures in the Liberals’ budget “are things that are going to make it more difficult.”

Mitchell was less scathing than other speakers in criticizing the government, but did single out Premier Dwight Ball.

“We’re all pretty forgiving and we don’t have a problem with the premier changing his mind about this,” he said.

Following the demonstration Joyce told The Independent there’s a misunderstanding about how the budget will affect low-income individuals and families in the province, and that the Liberals “never did a good job putting the information out.”

He argued people in lower income brackets will in fact benefit from the budget since the Guaranteed Income Supplement will more than compensate for the tax and fee increases.

“There’s 34 percent of the people in the province right now will have to pay no levy, none whatsoever. Another 43 percent of them will pay $300 or less,” he said. “With the Guaranteed Income Supplement anybody under $25,000 will have actually more money in their pocket. As with [those earning] $25,000 to $40,000, the taxes will be offset by the Guaranteed Income Supplement.”

Asked if he thought the Deficit Reduction Levy was fair and necessary, Joyce said “there’s always opinions [on] how to do it, right or wrong, and this is the way we’re doing it. The levy is only there temporarily and we’re looking to remove it as quickly as possible.”

When asked if there was anything at all in the Liberals’ austerity budget that he didn’t support, he replied: “We’re facing a [huge] deficit — we’re going to help make sure generations don’t pay down the road. Of course I support it… I can’t bury my head in the sand — there’s decisions we had to make and there’s decisions that we’re going to have to make in the future. As we speak today there’s more money in interest on our debt than [there is] for school systems in the province.”

Correction: A previous version of this story referred to the Qalipu Mi’kmaq First Nation Chief as Brendan Sheppard. This was a typo. The current Qalipu Chief is Brendan Mitchell.

It’s time to get our political house in order
"I respectfully request you use your authority to halt the present course towards disaster and dissolve the current government. Call together experts in governance and… 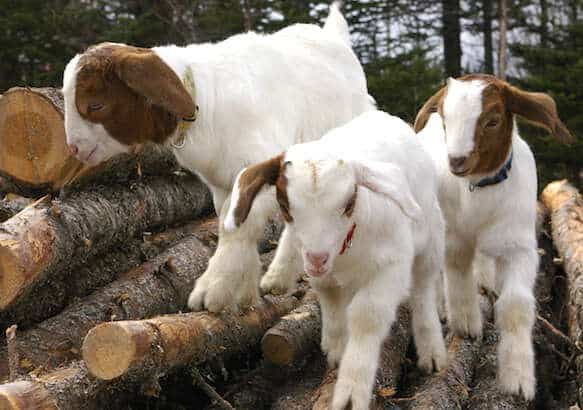 Babies on the homestead
The first day of spring brought the arrival of three baby goats to the McBride homestead. This is Maple’s story of her journey through pregnancy…