I’m writing now about heroes: the different kinds of heroes sisters need in their lives, and the different ways sisters can—sometimes without knowing it—sort of accidentally, at the right time, be the kind of hero that sisters need.

I’m writing this today twenty minutes after a breaking news report tells us that Senator Jeff Flake has announced he will support Judge Brett M. Kavanaugh for the Supreme Court in the United States, just after survivors of sexual assault confronted Flake with their own stories. I read a Globe and Mail column that recounts Professor Blasey Ford’s story and the stories of so many other women who’ve come forward to tell us all that we still don’t know what to do about sexual harassment and assault and the inequalities it creates between men and women. I just read Elizabeth Renzatti’s words: “They’ll be remembered as heroes and I hope that counts for something when they look at their scars.”

I’ve wanted to write this for a long time, such a long time that I searched my office and house over several times for the early notes I knew I’d written for this piece. In my mind, the piece was complete, but in the half-used notebook in the middle of stack of notebooks, I found only a page of scribbled, half-formed thoughts. “The banality of the body,” I’d scratched out in pencil. And: “the banality of evil done to the body.”

Not much to start with, but here I go, as I always do, my gut instinct my only map.

I wanted to write this piece before Kavanaugh, before Ghomeshi, before Cosby. I didn’t, though. This was before #metoo, and I was busy, always busy. There wasn’t a chorus to join, and I never liked singing much, not on my own.  I haven’t developed my voice.

I didn’t write this piece because it was too early.

I’ve wanted to write it since my own nonfiction essay, “She Gets a Paper Route So She Can Save Up for a Bicycle,”  was accepted for publication in Breakwater’s Best Kind and since the piece was described by a reviewer as a testimony about childhood sexual assault and those words startled me. The story I wrote isn’t about that, I thought. Not at all.

I have my own #metoo stories. Of course I do. Me too: I posted that as a status on social media some time ago now. I didn’t do it early in the campaign. I put the post up a bit late, really. Late, because I’m reluctant, and late because public displays of self aren’t what I do with any ease. I’d wanted to post #metoo because I’ve been open about my stories before. But then I thought I’d better not. After all, what does my story matter? Still, I read the posts of women I know: me too, me too, me too, me too.

Then this one woman I know posted “me too.” She was a bit late to the two-word social media chorus too. She works in a field where so public a confessional was a risk in ways that I knew and understood. I stopped in my tracks right where I was: on campus at Memorial University in Newfoundland; outside, in the sun. It was warm. You too, I thought, as an emotion I didn’t recognize rose into my chest, and you are posting it publicly.

Well, then I can too. I stood by the pond and typed “me too.” And I joined this chorus of women, knowing their voices—many much, much stronger than my own—would carry mine along.

Of course, I wrote “me too,” but I wasn’t writing this essay, was I? No. I was flailing—thinking about it and not doing it every two weeks or so.

I was teaching Current Affairs at the College of the North Atlantic when #metoo hit its stride. We were supposed to talk critically about the news. Two times a week. There was always a flood of new stories, new accusations, new names involved. My class of twenty-two and I were talking sexual harassment and sexual assault and parsing these stories for what they say about who we are in Canada and in the world today. And I noticed something interesting: a generational change. The broader conversations among many from the younger generations are fundamentally different than the conversations we had in earlier decades.

Other women have written about what growing up was like for anyone over forty: on one hand we all knew who was harassing and assaulting women. We spoke about men’s exploits pretty openly—as a joke, as a normal thing. On the other hand, if a woman came forward to report a harassment or an assault, we were no longer allowed to say out loud that some men did these things to some women. We were not allowed to believe that in this instance it could possibly have happened—only monsters do those things, and clearly this man in this situation isn’t a monster. He never is, women know that. And women know that’s what we’re trying to tell the world.

With the students in my class, however, I noticed that no matter their gender, they immediately knew not only that sexual assault and harassment was wrong, but that consent was a basic starting place for any sexual interaction—that children under 18 could not give consent, full stop. The starting place for many from the younger generations involves handling competing claims of consent and building supportive polices. Aren’t the men and women from my generation and older starting the conversations at the same place first-wave feminists had to begin?  We still have to convince everyone that these are the stories many, many women have to tell, and that the stories are true.

The essay I wrote for Best Kind is told in third person and written like a short story. The piece focuses on a child’s point of view as she navigates an unwanted sexual advance toward her and her sister from an older man. The story hinges on the simultaneous re-telling of a telephone conversation between the sisters as adults, more than 30 years later, as they recount the story to each other for the first time since their childhood. They share details of other advances by other men.

I can see why someone would call it a story about childhood sexual assault—although I admit I hesitate even now to use the word “assault.” It was normal, this invasion of childhood physical space. I’m not referring to frequency. It was normal because it was broadly known. It was understood and shrugged off. A church elder gropes you between your legs? Well, sit across the church from him. He has trouble with attraction to little girls and we should all be careful with him—that’s the social normalcy I’m talking about. That was life.

Today’s younger generations would not let that go, I think, based on my experience with my journalism students in classrooms on Prince Philip Drive. While we weren’t allowed to name harassment and assaults as harmful, these younger people are all over consent. This has given me so much hope. They’re puzzled and outraged by the complexities of how institutions are trying—and failing—to respond, by the back and forth of sexual harassment and assault policies in schools and workplaces, by the institutional fear of the legal implications of acting on women’s stories. But in general—unlike my generation—they’re not confused about right and wrong. They already know that no woman or man or child should be forced into any kind of sexual activity in the course of their daily lives, no matter how much anyone had to drink or how much fun he was having or how godly he was.

For quite some time now, I’ve wanted to write that She Gets A Paper Route So She Can Save Up for a Bicycle is not a story about childhood sexual assault. It’s a story about heroes and the ways sisters can be heroes to each other without ever knowing that’s what they’ve done. Heroes swoop in wearing capes and punch the bad guys. So, who is the hero when no one swoops in, when the bad guy just goes along doing what he’s always been doing?

I sent my sister the essay after the collection had been published. In the story, I show the brand of unseen heroism particular to the shy, polite child who doesn’t want to be noticed. I tell how I kept my little sister safe by lying and by being rude, and by the standards of the day that included not hugging a man who wanted to hug you. I tell how difficult that kind of bravery can be for a poor, marginalized child. And yet, I also tell how my sister saved me, by speaking out when we were children, by speaking to me of all of this in these last few years now that we are adults. My sister read the essay and she said it made her cry. She showed it to her husband. She said to her husband: remember when I told you about those things?

Who’s the hero? She believes me to be her hero. In the story I wrote and in my adult life, since that telephone call I describe in the story, she has been the one to save me. She saved me when we were children because I was only able to be brave because I had to protect her. We’re different, divided by so much—by distance, by personalities: my desire for calm and quiet and her need for noise and distraction, my stolid purpose, her spark of inspiration moving from one idea to the next. There is so much between us, but this—her speaking out, her talking to me on the phone from across the country, and her steady belief in me—has saved me all these years.

The banality of the body and the evil done to it, the everydayness of it all: the accusations that haven’t been tried in the court of law, the painful stories, the pictures of women in tears and the men angry and defensive, yes there is that.

And there is a sister who has saved you because she thought of you as a hero for over forty years, and always will.

There’s something in that, and it’s not banal at all. 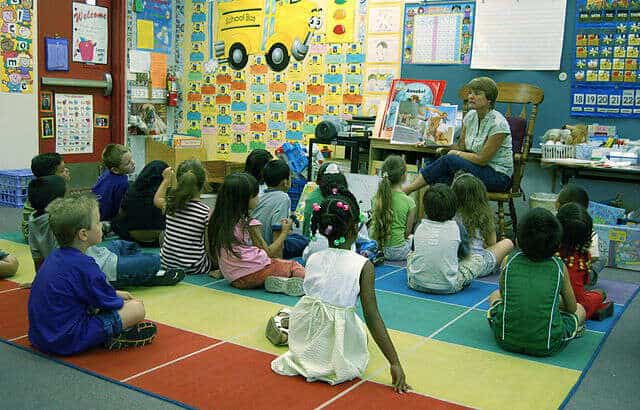 Will the latest report on Canada’s shoddy childcare help to reduce government neglect?