Newfoundlanders and Labradorians set to take action on climate change

Organizers in Happy Valley-Goose Bay, St. John’s and Stephenville are hosting events to coincide with this weekend’s day of action on climate change, which is expected to draw upward of 100,000 to the streets of New York, where world leaders are convening for a summit on climate change next week. (With files from Jon Parsons)

This weekend will mark a crucial moment in the evolution of a growing mobilization among civil society to influence the development and effects of climate change.

More than 100,000 people are expected in the streets of New York on Sunday in advance of Monday’s climate summit called by U.N. Secretary-General Ban Ki-moon, which will bring together more than 100 world leaders in an attempt to generate the political will to address the global climate crisis. Demonstrations are planned in cities and countries around the world. In St. John’s a protest is being organized for Sunday afternoon at Harbourside Park, while in Stephenville residents will convene at the Lion’s Club for a talking circle on climate change, and in Happy Valley-Goose Bay there will be a screening of the film Lament for the Land that deals specifically with climate change in Labrador.

Canadian Prime Minister Stephen Harper has already said he will not attend the summit in New York. In 2011 the Harper administration withdrew Canada from the Kyoto Protocol, the world’s only binding international agreement to address climate change by reducing carbon emissions. Canada’s climate change record, accentuated by Alberta’s tar sands development–widely regarded as the dirtiest fossil fuel project in the world–has earned it “Fossil of the Year” award for five consecutive years at the global climate conferences. The award is given to the country that does the most damage to the global climate talks each year.

At the Earth Summit in Rio de Janeiro in 1992, Canada joined 153 other nations in signing the United Nations Framework Convention on Climate Change (UNFCCC), the world’s first international treaty which sought to “stabilize greenhouse gas concentrations in the atmosphere at a level that would prevent dangerous anthropogenic interference with the climate system.”

The Kyoto Protocol was an updated version of that initial treaty, and by signing and ratifying the new agreement in 1997 Canada pledged to reduce its carbon emissions to six per cent below 1990 levels between the years 2008 and 2012. When Harper withdrew Canada from the agreement in December 2011, it was estimated Canada’s carbon emissions had in fact risen by 30 per cent over 1990 levels.

Each year world leaders or their representatives meet at the United Nations’ climate change conferences, otherwise known as the Conferences of the Parties (COP) climate talks to assess progress in dealing with climate change. It was just days after the 2011 conference in Durban, South Africa (COP17) when Canada withdrew from Kyoto, but it did pledge to new non-binding targets controversially championed by the world’s worst carbon emitting countries in Copenhagen at COP15 in 2009. Under the Copenhagen Accord Canada pledged to reduce its carbon emissions by 17 per cent below 2005 levels by 2020.

Globally, the thresholds for climate change are most often measured in terms of maximum allowable temperature rise and the ratio of carbon dioxide (CO2 ) molecules to all other molecules in the atmosphere, in relation to pre-industrial levels. It is widely agreed among many of the world’s top climate scientists that the global temperature cannot exceed more than 2 degrees warming above pre-industrial era temperatures, and that the amount of carbon in the atmosphere must remain at or below 350 parts per million (ppm) to avoid that rise in temperature. At present, Earth has experienced almost one full degree temperature rise since the 19th century and a rise in carbon concentration to 400 ppm.

The Industrial Revolution, which is largely responsible for the technological, social, political and economic advancements of Western Civilization, was fuelled by the large scale extraction and burning of hundreds of millions of years worth of stored energy in the form of fossil fuels in just the past century and a half. “Humans have increased atmospheric CO2 concentration by a third since the Industrial Revolution began,” reads NASA’s website. “This is the most important long-lived ‘forcing’ of climate change.”

Opinions vary over both the maximum permittable temperature and carbon concentration rises in the atmosphere, but with a 0.8 Celcius temperature rise we are already seeing dramatic rises in extreme weather events and melting of glaciers and sea ice in the Arctic.

In Newfoundland and Labrador, interim premier Tom Marshall recently announced that the province was best situated and eager to lead oil exploration in the Arctic, where glaciers and sea ice are melting at unprecedented rates, opening up a new frontier for the global fossil fuel industry.

In the wake of its Climate Action Plan, released in 2011, the Government of Newfoundland and Labrador is pursuing a controversial hydroelectric mega project at Muskrat Falls, despite the fact large scale hydro developments are scientifically proven to release large amounts of methane gas in the years following reservoir flooding. Methane gas is the most potent of greenhouse gases. Though it occurs in lower concentrations than carbon dioxide, it produces 21 times as much warming as CO2. Critics of the Muksrat Falls project say the province has not done enough to explore renewable clean energy alternatives like wind, solar, and tidal energy.

A recent update on progress of the provincial Climate Action Plan had some positive results, but also some reservations about meeting goals: “As of 2012, which is the latest year for which data is available, Newfoundland and Labrador’s GHG emissions were 5.4 per cent lower than in 1990. However, strong growth in the industrial sector is projected to increase future GHG emissions significantly. Without further policies and measures, GHG emissions are expected to be 4 per cent above 1990 levels by 2020,” said the report.

In 2013 the province also commissioned a study by Memorial University climatologist Joel Finnis, who applied global models of climate change to the Newfoundland and Labrador context. Finnis points out that climate change will affect the Newfoundland and Labrador portions of the province differently since, he writes, “[o]cean areas respond relatively slowly to temperature changes (either seasonal or long-term climate trends), keeping maritime climates like Newfoundland locked within a limited temperature range. The Labrador interior lacks this moderating influence, and temperatures consequently see a greater response to climate change.” These predictions are corroborated by climate researcher Robert Way, of the University of Ottawa, who has demonstrated that warming in Labrador is occurring at twice the global rate.

On Wednesday evening a group of St. John’s residents gathered at a downtown cafe to watch a new documentary on climate change and the climate change movement, Disruption (it can be streamed free here). They also began organizing and mobilizing for what is expected to be the world’s largest action on climate change to date. On Friday evening from 6-8 p.m. they will meet at the Victoria Park pool house to prepare for Sunday afternoon’s People’s Climate March, which will begin at Harbourside Park at 1 p.m. and see people marching through the city’s downtown core.

Kathleen Parewick, a local organizer of the St. John’s march and vice-chair of Friends of Victoria Park, spoke to The Independent about the significance of the events, locally and globally. “We need to see one another out in the community acting on these sorts of issues,” said Parewick. “I think this is a very inspired idea, the idea that it’s going to be happening more or less simultaneously on the same weekend right around the world, and that you can get online right now at 350.org and search for a climate march in your community, and that you can then connect with friends in your greater circle and ask them to retweet or pass on this information and go through that portal and find other like-minded folks who are gonna be out on the street that weekend.”

Parewick also suggested that governments need to step up in addressing climate change. “I think virtually every single member of the administrations that comprise our federal, provincial and municipal governments have a role to play. They’re all people too. … I’d like them to give it some consideration. I’d like them to be mindful of the fact there are a number of actions that are coming down the pipe — the timing of the People’s Climate March and the lead-up activities to it are not the only things they will have an opportunity to get involved in.”

Jimena Martinez, another of the organizers of the local St. John’s event, compared the environmental movement in the province to her home country of Spain, further illustrating the global-local aspect of the day of action. “We’ve devastated everything over there [in Spain], and when I came here to Canada it’s nice landscapes and all these trees, and the landscape you have is still here. And I think you really need to preserve that,” she said.

“I think it’s very good that we as a capital of a province have our own event and it can be seen from outside that we are doing something, because there are a lot of people involved here in the anti-fracking movement or other environmental causes,” she continued. “There are more and more people involved in this movement … because they are seeing it closer and closer to their lives.”

For many, there is also an economic aspect to be considered. Award-winning Canadian journalist and author Naomi Klein is set to release her long-awaited new book, This Changes Everything: Capitalism vs. the Climate, on Sept. 23. In an interview with Democracy Now! on Thursday Klein summarized the significance of the global day of action, suggesting that climate change cannot be addressed without a major overhaul of our global economic system, but also suggests that climate change presents us with an opportunity for unprecedented global cooperation.

“In order to [address climate change] we have to change everything, or some pretty fundamental things, about our economic system,” she said. “The good news is that the things we need to change, many of them are broken anyways. We need to make vast investments in the public sphere which would create millions of good jobs … and in so doing we will tackle one of the most intractable problems we face, which is gross wealth inequality. We can’t fight climate change without dealing with inequality in our countries and between our countries.” 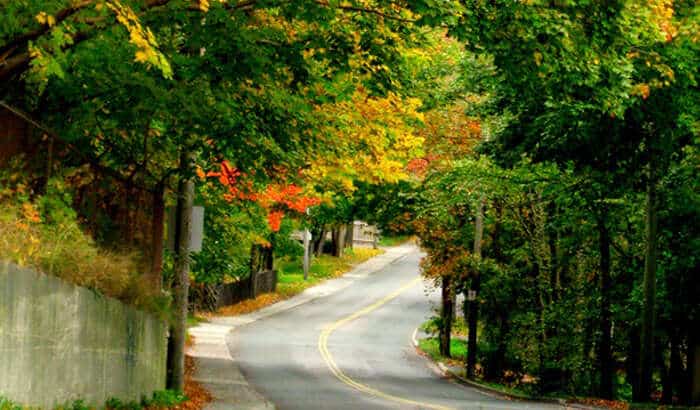 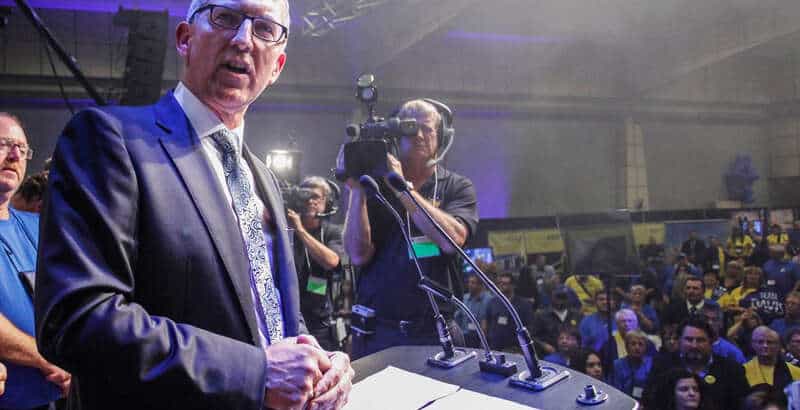 Words matter
Does Paul Davis represent a change for the Tories? A comparison of the language used by the provincial government with that of Davis during his…