Events will be held in Happy Valley-Goose Bay, St. John’s and Stephenville to share concerns over the provincial government’s continued use of the herbicide Agent White, which has known serious environmental and health impacts.

Concern is growing over the provincial government’s refusal to reconsider its ongoing use of Agent White, a toxic chemical mixture that was once employed as a weapon of herbicidal warfare by the U.S. Air Force in Vietnam and now serves as the preferred method of protection against shrubs and other vegetation growing on highwaysides and transmission line routes in the province.

On Saturday residents and groups in Happy Valley-Goose Bay, St. John’s and Stephenville will coordinate a provincial day of action to shed light on the province’s use of Agent White—a mixture of picloram and 2,4-D that is currently branded and sold by Dow AgroSciences under the name Tordon 101—and to garner support to have use of the substance and other harmful herbicides and pesticides banned from the province all together.

The province currently uses Agent White in its vegetation control program along provincial highways, where people are often seen picking berries, collecting trash or recyclables, and where wildlife such as moose often graze, and it will employ the same strategy in clearing the 1,100 kilometer transmission line route from Muskrat Falls to the Avalon Peninsula.

There are currently no programs or other mechanisms in place to monitor the short, medium or long-term impacts Agent White will have on the people and environment in Newfoundland and Labrador, though the substance has well-documented adverse health effects on plants and non-human animals.

A chemical health fact sheet published by beyondpesticides.org notes “picloram has been linked to liver and kidney damage and decreased body weights in laboratory animals in many studies,” and that “increases in the presence of tumours were obserevd in the adrenal, thyroid, pituitary glands and livers of rats, as well as in the reproductive gland  in female rats given picloram.” Further, the report says, a 2007 study “found evidence to suggest that parental exposure to picloram may even increase the risk of leukemia in children.”

The effects of picloram and 2,4-D together on reproduction and development are well-documented, the report explains. Studies have found that mice exposed to the mixture have experienced depressed embryonic development and fetal growth, and that Agent White has also been shown to be immunosuppressive. “Testicular damage has also been observed in rats administered picloram and 2,4-D.”

Agent White has been banned in more than 100 municipalities across Canada, and was among the pesticides and herbicides banned from cosmetic use in Newfoundland and Labrador in 2011, but the provincial government continues to endorse its use for other purposes, citing Health Canada and the federal agency’s approval of the mixture as an authority.

A coalition of groups—Friends of Grand River/Mistashipu, the Social Justice Co-operative of Newfoundland and Labrador and the Coalition Against Pesticides Newfoundland and Labrador (CAP-NL)—are calling for a province-wide ban on Agent White on the premise that the risks to human health, wildlife and the environment are too high, particularly when better alternatives exist, such as employing workers to maintain the highwaysides and transmission line routes.

“If you’re spraying something on the earth that kills everything from growing back for seven years until it’s leached back into the soil, we know that these chemicals…don’t go anywhere,” says Denise Cole, a member of Grand Riverkeeper Labrador and an organizer of the event in Goose Bay Saturday afternoon. “They still stay in our atmosphere, they still stay in our soils, they make their way down to our water systems.

“What happens when things eat what has been sprayed and what is dying?” she continues, expressing concern about the health of wildlife and humans who might consume contaminated wild game. “I was thinking about one of the things Elizabeth Penashue continues to say, that nobody can warn the animals — they can’t read any signs.”

Effort to work with the provincial government

Bob Diamond, a member of CAP-NL and one of the Stephenville event organizers, says his group is working on a position paper on Agent White to present to the provincial government in the coming weeks. Diamond says CAP-NL is hoping to meet with Conception Bay South MHA and newly appointed Minister of Environment and Conservation Terry French to “talk about recommendations we will have…as to how to better protect people and the environment from exposures to not only pesticides but other toxic substances as well.”

Amidst an ongoing grassroots effort to prevent the controversial practice of hydraulic fracturing in the province, due in part to the chemicals used in that process, Diamond says fighting the government on Agent White feels somewhat redundant.

“Sometimes you feel you’re just putting fingers into dikes and you want to know, where is this stuff coming down the pipe from?” he says. “And a lot of it points to the [federal] Department of the Environment and the Department of Health, particularly when it comes to pesticides. You got the pesticide regulatory agency, and a lot of it seems to be facilitating the registration, the sale and use, and they do this risk-benefit analysis…and there’s not enough attention, I believe, given to the actual risk to human health. The balance seems to be going to the considered benefits to the profits of the corporations that produce these chemicals.

On May 13 in St. John’s CAP-NL hosted a public forum on the impacts of pesticides on human health and the environment. The following day in the provincial legislature NDP member for St. John’s East George Murphy asked then Environment Minister Joan Shea if the government will ban the use of Agent White in Newfoundland and Labrador. Shea responded by saying Tordon 101 “has been used for decades in Newfoundland and Labrador,” and that the province “will continue to use that product as long as it is registered considered safe [by] our counterparts at Health Canada.”

Organizers of Saturday’s provincial day of action against Agent White and other harmful herbicides and pesticides are circulating a petition on behalf of George Murphy that calls on the Government of Newfoundland and Labrador to ban the use of Agent White in the province.

While the NDP have taken a stance against the use of Agent White, the Liberal Party has not stated a clear position on the issue. The Independent attempted to contact Liberal health critic Andrew Parsons on Thursday for comment but Parsons did not respond by the time of publication. In 2012 Liberal MHA for Torngat Mountains Randy Edmunds called on the government to halt its use of Agent White immediately and implement a public consultation process to seek a safer alternative.

Correction: An earlier version of this article named Grand Riverkeeper Labrador as an organizer of the event in Happy Valley-Goose Bay; it is in fact Friends of Grand River/Mistashipu that is involved in the provincial day of action. 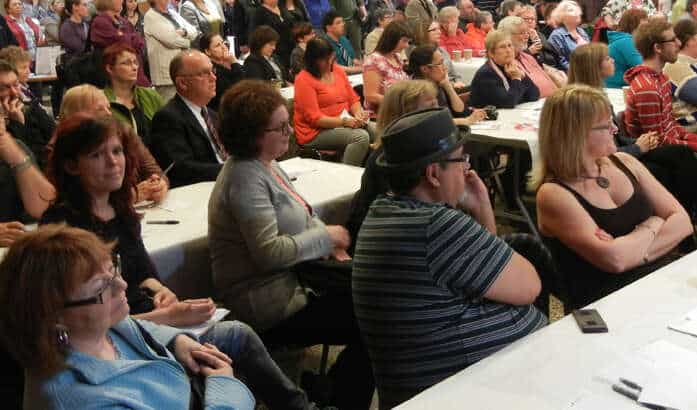 “The silence is killing us”
Hundreds gathered in St. John's Wednesday to share stories and concerns around the state of mental health services in the province