Solidarity actions with Muslim Canadians being organized in St. John’s and cities across Canada on Friday.

The chair of the Newfoundland and Labrador Human Rights Commission says the violent attack on a Quebec City mosque that left six people dead and several injured Sunday evening necessitates a strong response from people in this province.

After learning of the tragedy, Remzi Cej and some of his colleagues from Amnesty International took to Facebook to encourage people across the country to organize solidarity actions in their own communities to support Muslim Canadians in the wake of what Prime Minister Justin Trudeau described Monday as a “terrorist attack”.

“On Friday, during Congregational prayer, show up at your community mosque and form a human shield in solidarity with Muslims across the country,” Cej’s group wrote on a Facebook event page they titled Salam Canada.

“If you live in a community without a mosque, you can also individually reach out to your Muslim friends, colleagues, and neighbours to express your support.”

Cej, himself a Muslim and a former refugee who came to Canada with his family in 2000 after fleeing war in Kosovo, told The Independent Monday there is a danger that, in light of the recent surge in political and religious repression of Muslims in the United States, coupled with acts of violence like Sunday’s shootings in Quebec, “we can very quickly and very easily fall into hopelessness.

“But this is a time that we can mobilize to ensure that something like this doesn’t happen again — and if it does then we are ready to tackle it, to go out on the streets and let people know that we will not tolerate such violence and such hatred,” he explained.

St. John’s lawyer Gobhina Nagarajah picked up on Cej’s call to action and is organizing a human shield action outside the Masjid-an-Noor Mosque on Logy Bay Road.

“As Canadians we often look at what’s happening elsewhere and think that we’re okay and doing great, but we also need to remember that there’s work to be done at home as well, that there are people in our own communities who are afraid and vulnerable,” Nagarajah told The Independent on Monday, saying she wants Muslims living in St. John’s to “feel safe and supported.”

Police have charged 27-year-old Quebec City resident Alexandre Bissonette with six counts of first degree murder and five counts of attempted murder. The Université Laval student is the sole suspect in the shooting.

Last June a pig’s head was left on the front doorstep of the same mosque, at the Islamic Cultural Centre in Sainte-Foy, with a note attached that read “Bonne (sic) appetit.”

The shooting comes amid mounting Islamophobia and xenophobia in the United States and Canada, and just one day after U.S. President Donald Trump signed an executive order banning travellers from seven Muslim-majority countries—Iraq, Iran, Somalia, Libya, Sudan, Yemen and Syria—from entering the U.S. for three months. The order also prevents refugees from entering the country for four months, and Syrian refugees indefinitely.

Cej says Friday’s solidarity action in St. John’s and the growing number of events being planned across Canada are about responding to “political rhetoric” coming out of the U.S., and in Canada “by various candidates of national political parties here.”

At the time of publication solidarity events had been planned in more than 30 Canadian cities and towns.

Friends, acquaintances, and those who observed Bissonette’s activity on social media told the Globe and Mail that Bissonette began expressing anti-refugee and anti-immigration sentiments around the time far-right French National Front Leader Marine Le Pen visited Quebec City last March, and that he frequently expressed his support for Le Pen and Trump.

“He was someone who made frequent extreme comments in social media denigrating refugees and feminism. It wasn’t outright hate, rather part of this new nationalist conservative identity movement that is more intolerant than hateful,” François Deschamps, who runs a refugee-support Facebook group, told the Globe.

“We may have borders between Canada and the United States, but ideas know no borders, both good ideas—those that promote inclusion and diversity and respect and support—but also those sinister ideas that promote exclusion, promote sense of inferiority because of difference, and promote Islamophobia and xenophobia and anti-semitism,” he said.

“Time and time again we’re shown that those who hate and those who have contempt for diversity are only waiting for the right opportunity to make their views known. We have to be vigilant, we have to be active, and we have to continue our struggle to ensure respect for all.”

On Monday evening Trudeau, Quebec Premier Philippe Couillard, NDP Leader Tom Mulcair and other elected officials attended a vigil in Quebec City. Earlier Monday in the House of Commons Trudeau announced Canadians “will not meet violence with more violence. We will meet fear and hatred with love and compassion, always.”

On Saturday, in response to Trump’s executive order and amid the subsequent mass protests in American and international cities, Trudeau vowed on Twitter to welcome refugees to Canada.

Accompanied by the hashtag #WelcomeToCanada, the prime minister’s statement was reported in a favourable light by national and international media, with little mention of Canada’s ‘Safe Third Country Agreement’, legislation critics argue would prevent most refugees who are turned away upon arrival in the U.S. from then entering Canada.

Advocacy group Leadnow is circulating an online petition calling on the Trudeau Government to rescind the agreement. As of Monday evening it had more than 32,000 signatures. Meanwhile, those behind the Leap Manifesto have set up a webpage that facilitates direct letters to individual MPs.

On Monday Memorial University (MUN) issued a statement expressing “deep concern” over Trump’s executive order, saying it “affects international studies, academic conference participation, and in some cases family relationships of our university students and faculty, and it poses a significant threat to the free flow of people and ideas and to the values of diversity, inclusion and openness, hallmarks of a strong and healthy society.”

MUN also announced it is waiving application fees for students from the seven countries affected by Trump’s executive order. and for U.S. students too.

Toward understanding and inclusion

Cej said Monday that the fear and hatred underpinning the repression of Muslims in Canada and the U.S. can be countered with education and understanding.

“I think this is an opportunity for Canadians of all faiths and beliefs and backgrounds to learn more about Islam…and the diversity of Islam,” he said. “The fact that it’s not a monolith, the fact that over a billion Muslims around the world practice Islam, and to place all Muslims within this box of stereotype or archetype and monolith is just plain wrong.

Cej said stereotypes of Muslims are increasingly equated with impending danger, particularly since the 2001 terrorist attacks.

“I think we’ve been conditioned over time, and especially after 9/11, to think of Muslims in many ways as posing some sort of a threat, regardless of the fact that that may not actually be the case.

“We have an opportunity to learn about one another, and about the wealth of beautiful values that Islam [promotes],” he continued. “Caring for one another, caring for the environment, supporting other generations, supporting family and friends, caring for strangers, and humanitarian support and aid and charity in the community are among the foremost values of being a Muslim.”

In response to inquiries regarding the Mosque’s feelings about the human shield, Nagarajah posted on the Facebook event page that the event “has the support of the Mosque,” and that visitors have been invited to observe the sermon and prayers.

“You are not expected to pray, but are being invited to join those who are, or you can pray in your own way,” she said.

Cej said that “as a Muslim who came to Canada, I discovered a lot about Islam after arriving here because in the country where I grew up being a Muslim was something we couldn’t openly talk about because of the open political and religious repression.

“So having that freedom here, yet at the same time feeling stigmatized at times to openly disclose one’s religious identity has been an interesting experience. I simply wish that more Canadians would see the kind of Islam that I’ve grown to see, and the kind of Islam that informed and very much enriched my values.”

Hundreds are expected to gather Friday at 12:30 p.m. to form a human shield for those attending prayer services at the Masjid an-Noor Mosque in St. John’s. For more information visit the event page on Facebook.

Correction: A previous version of this story erroneously reported that Ibrahima Barry and Mamadou Tanou Barry were brothers. They are not, and the story has been updated to reflect the correction. 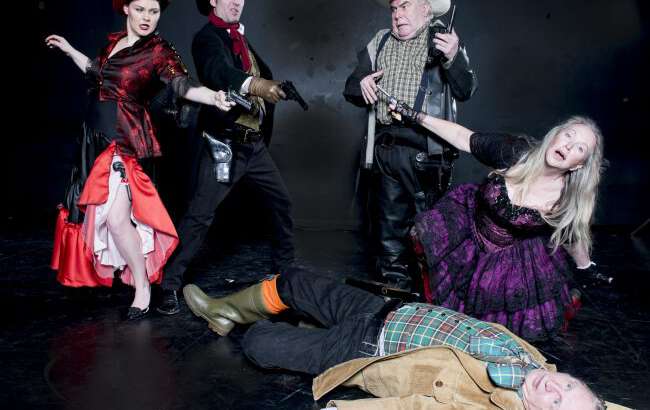 Revue 2016: The good, the bad and the ugly
Rising Tide Theatre strikes again in hilariously highlighting the absurdity of N.L. politics. But is it a foregone conclusion that there's nothing we can do…

Dear Kellie Leitch: fear tactics will not work
Using divisive tactics, inflammatory language and nationalist rhetoric to further your proposed policies will place you firmly on the wrong side of history.