The new council meeting went lightning fast this round, approving a new restaurant, assigning clean up duty at the Paul Reynolds Centre, naming councillors to new boards, as well as selling some downtown City land.

The Discretionary Use application to construct a building at the back of 1372 Blackhead Road for Heavy Equipment Storage that was deferred in last week’s budget was back on the agenda this week.

Cllr Maggie Burton, who previously had asked the decision be deferred to speak with more residents, said she wasn’t able to support this application, adding she’s familiar with the area and doesn’t think the use is “super compatible” with the neighbourhood.

“I think it’s a decent idea for a business there but I don’t think it’s in the right location.”

However, the motion carried 10 to one.

The City then approved a Discretionary Use Application for an Eating Establishment by Rocky River Smokehouse at 279 Portugal Cove Road.

Cllr Jamie Korab said the owner is looking to set up a restaurant that will be approximately 93 m² and have up to six employees. Hours of operations will be seven days a week, 11:30 a.m. to 11:00 p.m. There will also be on-site parking and it’s in the Commercial Neighbourhood (CN) Zone.

Cllr Korab added he’s been in contact with the owner, who is on his second attempt to get a place in St. John’s, and currently has another restaurant outside the CIty. “His food looks delicious.”

Northern Americas Satellite Ventures Inc. also got the nod to construct a new satellite earth station antenna at 541 Kenmount Road, which is on Rogers property.

Because of the City of St. John’s Siting Protocol for Wireless Facilities, the City has notified property owners in the area of the intention to construct the proposed station. The site is zoned Commercial Highway (CH) Zone. The City also gave property owners within a minimum 150-metre radius a heads-up about this potential development. Moreover it was advertised in The Telegram newspaper at least once and was posted on the City’s website.

Royal Cleaning Services Inc.—coming in with a bid at $321,512.40—secured a contract to provide janitorial services for the Paul Reynolds Community Centre. The contract is for three years, though it could get one two year extension.

For the price of $2,062,945.33, Graymont (NB) Inc. also secured a contract to supply hydrated lime to each of the water treatment facilities. It was the sole bidder and it did meet the City’s qualifications, said Cllr Sandy Hickman.

The Council was expected to appoint two people to sit on the 2025 Canada Summer Games Host Society Board of Directors. However, Mayor Danny Breen asked this decision be deferred until the next regular council meeting, which was approved.

Mayor Breen also mentioned Cllr Korab had stepped down from St. John’s Sports and Entertainment and he’d be interim chair, with Cllr Ron Ellsworth taking it over in “very short order.”

As with any new term, people are moving to advisory committees, experts panels and working groups. So the council also approved who was sitting where now. Mayor Breen didn’t read out all of them, adding they can all be seen on the City’s website. These postings are for a two year period.

Deputy Mayor Sheilagh O’Leary said “Obviously, after a two year period then we’ll have a review and go back and look at it again. But it really does provide an excellent opportunity for Council members to sink their teeth into different issues that they may not normally be akin to.”

Canada Games: To Be Determined

As its last order of business for the day, Council also approved the sale of City land adjacent to 55 Springdale Street (i.e. the old City Superette Deli).

More details were in the agenda, where it was stated the owner of the property is in the midst of wrapping up renovating it. To meet code, he has to install a window, which will require a window well. As you can see from the image, the property boundary is the building, so the window well will be on City property—which means a list of potential liabilities from people tripping, falling, damages and maintenance costs. So to reduce the City’s liability, the City is selling the property and the owner will build a rail around the well to protect the well and avoid issues for pedestrians.

While the Council didn’t dish on costs, the agenda (the real MVP today) said the purchase price would be established at fair market value for the area, plus HST and administrative fees.

At this point, the council had hit the 18 minute mark, the fastest I’ve ever seen a meeting go. And as usual, the mayor opened the floor for any comments that councillors wanted to make at the end of the meeting. As he called on councillors one-by-one, it seemed not many people wanted to chat.

Cllr Ravencroft wanted to extend the council’s condolences on the passing of Andrew Harvey, a longtime community activist and First Light employee.

Deputy Mayor O’Leary said as the Committee Services lead, she gets to tout upcoming community events, like Halloween. The City is once again hosting the Pumpkin Walk at Bannerman Park on November 1. There will be music, pop-up performances, as well as people’s pumpkins. After the event, the gourds will be collected and composted at the City’s waste management facility.

She also said applications are available for community services and housing, special events and festivals, sporting groups and organizations, artists and arts organizations, as well as capital grants. The deadline to apply for grants is November 26.

She also congratulated the East Coast Trails Association for raising $52,000 at last weekend’s fundraiser, which she attended.

It looked like no one else had any announcements to add, so at the 24 minute mark Mayor Breen went to adjourn this week’s council meeting only for the disembodied voice of Cllr Hanlon—who was attending virtually—to point out she hadn’t been asked if she wanted to say anything. She didn’t, but I guess it was the principle of the thing. (I, too, have wanted to remind people I’m there and felt overlooked when attending things by Zoom).

With that, the meeting was adjourned for real and the video went to standby.

What Odds at City Hall: 18 October 2021
The new council awards contracts for work, including cleanup after Hurricane Larry—plus, the city experiences some technical difficulties. 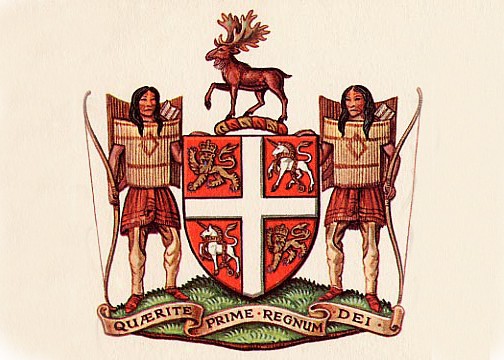 The NL Coat of Arms Remains a Relic of Colonialism
The Newfoundland and Labrador Coat of Arms is a relic of colonialism, and removing the word “savages” won’t change that.