The PERT Report and the Mockery of Transparency

As citizens of this great province, we demand that our political leaders are ready to be open, transparent and accountable.

On August 19th, 2020 Andrew Furey addressed the media after being sworn in as the 14th Premier of Newfoundland and Labrador. Like Premiers past, he committed to leading an open and  transparent government.

He promised to listen and learn because it leads to better decisions. Premier Andrew Furey was ready to be honest and straight up:

You’ll know exactly what the hard decisions are, and how they will impact our province, and why we are making them. When asked a question, expect a straight-up, fact-based answer. No rhetoric, just reality. We will stand and be accountable for our mistakes, and…. will strive to learn from them.

Of course, it didn’t take long before the Premier adorned the mantle of previous Premiers and  began to employ bafflegab and bluster in his public statements and press conferences.

On September 3rd, the new Premier announced the appointment of Dame Moya Greene to serve  as chair of the Premier’s Economic Recovery Team (PERT). The actual Team was announced on October 22nd. According to the government news release, “the team will review government  expenditures, the province’s fiscal capacity, how services are delivered, and explore growth  sectors such as clean energy and investments in technology.”

What was missing were statements explaining how they would accomplish this task, whether or  not the report would be made public, and most importantly, how the public and organizations,  like unions, would be able to participate in the process in a way where all concerns would be  taken into account.

Concerning for unions was the fact Dame Greene had a long history leading in deregulation,  centralization and privatization schemes with Crown Corporations and public services – everything from rail to mail. Her anti-worker, anti-union attitude was well known within the global labour movement. When you invite someone carrying an axe to the table you should expect cuts.

Then Came the Election

People were not fooled by this rush to get folks to the polls—given the series of events that had just occurred. Furey would need a majority government if he was to push the pending PERT recommendations through the House of Assembly.

Furthermore, in the days leading up to the election call, the Liberals were busy making  announcements and signing union contracts. One controversial announcement on January 14th involved $2 million to be put in trust toward the purchase of a PET scanner for the Corner Brook hospital.

It was clear the one issue that the Liberals could not avoid was the PERT team and their secret  meetings. On the day of the election announcement, both opposition parties demanded the election be delayed until the release of the PERT interim report, expected at the end of February.  They argued that the public should know the direction in which the Liberal government was  prepared to take the province. 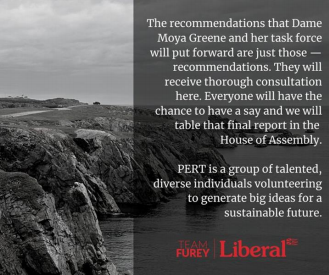 Liberal leader Furey once again highlighted his commitment to openness and transparency. The PERT’s recommendations would receive “thorough consultations” prior to the report being tabled in the House of Assembly.

As we now know, there was no interim report released to the public, and the election that eventually ended on March 27th decided in favour of Andrew Furey’s Liberals. While he received the majority he craved, it was somewhat underwhelming. Elections NL announced a 48% voter turnout—a historic low—and the Liberals won 22 of the province’s 40 seats.

On May 6th, PERT submitted their report to government and Dame Moya Greene made a public appearance, via Zoom, from her home in England to present her report. And it was indeed her report, as stated in the PERT Terms of Reference, “the responsibility for the final report and its  content will be that of the Chairperson.”

For a report that was so guarded, it was interesting to hear Dame Moya highlight the importance of transparency and accountability. As stated in The Big Reset Executive Summary:

This province’s challenges can only be addressed with big resets:

First, accountability and transparency must be improved in decision-making in all types of governance: in the cabinet room, in the public services, in agencies and commissions, and in the boardrooms of corporations and major institutions, whether private or public. Transparency is important – as noted by American Justice Louis Brandeis’s, “sunlight is the best disinfectant.” Citizens must ensure that leaders and Government spend wisely, use  evidence to make decisions, and are open about how and why decisions are made.

On May 14th, Premier Furey met with reporters to discuss the report and let it be known that his government was promising action soon and was preparing a five to six year strategy. Somehow there was no mention of the need to listen and learn from our public consultations.

May 28th, 2021 saw the launch of the formal consultation process for the PERT report, via the government’s EngageNL website. The key word here is formal. There is a link to a public questionnaire on the website, which if you open it, you will quickly discover that your ability to  provide any real feedback on the recommendations is limited, at best.

After hearing from union members and community activists who were frustrated by how the public questionnaire was framed, the Newfoundland and Labrador Federation of Labour (NLFL) did its own analysis.

It is very clear that the survey questionnaire is not adequately designed to measure the public’s  views regarding the report’s recommendations. Overall, the survey offered through EngageNL is  misleading and as such it is not a sufficient public engagement tool. Our analysis found that the  poll is self-serving, and designed to skew results in the favour of the pollster. Singer-songwriter John Prine summed up our findings best when he wrote, “A question ain’t really a question, if you know the answer too.”

The analysis showed that nearly half the questions are leading ones, pushing people towards the answers that government wants them to choose. There are very few open-ended questions. Others are confusing and use inaccessible language. It was next to impossible to raise any meaningful dissent about any of the recommendations.

There are 26 pertinent questions that focus on the recommendations in the Report. Here’s what our analysis revealed:

Leading: Questions that guide one to a predetermined answer. Thirteen (13) leading questions were identified.

Confusing: Questions that are poorly worded, leaving people confused about how to answer. Sixteen (16) confusing questions were identified.

Double-barreled: Questions that squeeze too much into the question making it difficult to answer accurately. Sixteen (16) double-barreled questions were identified.

Close-ended: 3 of every 4 questions do not allow for any meaningful feedback.

Inaccessible: Plain accessible language that allows the entire public to have their say is a key consideration when consulting and seeking feedback.

One of several examples of an inaccessible question we identified was: “In general do you support  realignment of education, healthcare and social safety nets in our province?”

Not only is  “realignment” inaccessible language, the question pushes the respondent to say yes and leaves no space to qualify an answer.

Is the survey adequately designed to measure the public’s views regarding the PERT report’s recommendations? No, it is not.

It can be argued that this survey is akin to a push poll and as such it renders “the consultation” superfluous, since it gives the illusion that the public has been given a voice in a definitive  manner.

It is time Premier Furey respectfully honour his commitment to transparency and accountability. Especially at a time when the PERT process is planning fundamental changes for our economy and our public services.

Premier Furey, you promised to listen and learn. To do that you need to allow for dissenting voices to be heard.

The recent election had one goal in mind, a majority government that did not need to consult or  listen, and the promise of a thorough consultation on the PERT has been anything but thorough. Perhaps the Premier should take a lesson from Dame Moya’s recommendation on transparency and let the sunshine in.

As citizens of this great province, we demand that our political leaders are ready to be open, transparent and accountable. We deserve no less.

So Moved, St. John’s: 14 June 2021
How hard hindsight smacks us in the face is a question of whether we were looking into the future to begin with, or clinging to…

St. John’s Board of Trade Outlook 2021, Day 2: Feet on Fire
Finance Minister Siobhan Coady assured the Board of Trade that the banks and credit agencies are happy—and that good times are on the way.