Hot on the heels of the defection of PC MHA Paul Lane and NDP MHAs Dale Kirby and Chris Mitchelmore from their respective parties, former Premier and PC MHA Kathy Dunderdale announced Wednesday morning her intention to cross the floor and run for the Liberal Party in the next provincial election.

At a press conference held in the PlayPlace at a centre-city McDonalds, surrounded by faithful supporters of all party stripes as well as bouncy balls of many different colours, Dunderdale addressed her political future.

“Events over the past months have made it quite evident the PC Party and I no longer see eye to eye,” she commented. “My seat doesn’t belong to my party, it belongs to my constituents. Well except for that crowd up the road in Airport Heights who voted for the other feller.”

Representatives for the Liberal Party were on hand to welcome Dunderdale into the growing fold of the party-to-fit-all-parties.

“We’re pleased to have somebody with as much experience and fortitude as Ms. Dunderdale to be part of the Liberal team,” said Bill Turncoat, associate director of party defections for the Liberals.

“I think her move demonstrates that the Liberal party can indeed be a home for Newfoundlanders and Labradorians of any and all political stripes, backgrounds, opinions or experiences. We aren’t dogmatic, and we respect all political opinions and beliefs. If you’d like to vote or run for us, we’ll accept yours too! We’re especially looking to fill openings for former Communists as well as Labrador separatists.”

“And we don’t hold grudges,” Turncoat continued. “Forgive and forget!” is going to be one of our key campaign slogans in the upcoming election.”

“Mind you, we’re not a zebra party,” he said. “We’re more of an octopus party. Many tentacles, one big head and a beak that can crack coconuts. Cross us and we’ll drown you with ink!”

Many members of the PC caucus were caught off guard by the unexpected defection.

“I don’t know what she has against us,” said one caucus member on condition of anonymity. “We didn’t mean anything by kicking her out of the premier’s office. You can’t take that sort of thing personally. I took her out for a Big Mary and taters afterward and thought everything was okay.”

It was unclear whether her move would have any impact on the PC leadership race. Interim Premier Tom Marshall insisted that the leadership selection process would not be affected, and that he had no intentions of joining the Liberal Party before the new PC party leader had been chosen.

“The Ostrich”
"Is it possible to change a future that is rushing towards us virtually unhindered...?" 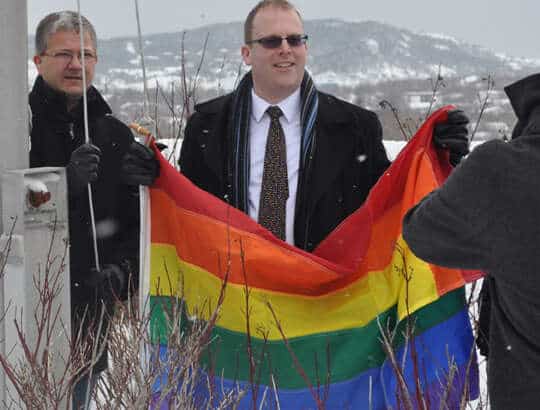 Provincial government raises Pride flag for first time in NL history
As the 2014 Winter Olympics get underway in Sochi, communities across Canada and the world speak out against Russia's anti-gay laws