Back from the dead and live on the web

Different time, different group, different world – but the same desire to provide a new media source that gives more information, richer commentary and deeper insight into the news and events that affect Newfoundlanders and Labradorians

Brian Dobbin
# Back from the Dead and Live on the Web

Welcome back, faithful reader. Newfoundland and Labrador in 2011 is a LOT different than it was eight years ago when I first invested into the Sunday Independent. For those that don’t remember that paper then, it was an earnest effort of young locals to provide a new media source in the province that would give more information, richer commentary, and deeper insight into the news and events that affected Newfoundlanders and Labradorians.

I remember seeing the pink, white and green on newsprint for the first time in the lobby of Strawberry Hill in the Humber Valley. Although I didn’t appreciate the strange layout that looked like a tabloid but had to be read sideways, the new start-up hit the right notes with me and by the time I was fully involved we had re-aligned the look and invested heavily in the product.

Over the next five years the ‘Indy’ slowly grew in its readership base and I believe came to occupy a certain position inside Newfoundland that was very much what we had envisioned, but we were stuck in a dying business – the print newspaper. Although we enjoyed a brief resurgence after the first time I shut down the paper, spurred by public desire to see the Indy back, the deck was stacked against any long-term success.

I was content enough with what we had accomplished and felt that over the life of the newspaper we had succeeded in directing public attention to areas that I felt were quite important at the time – and that didn’t really involve who insulted whom in the previous St. John’s city council meeting. Like other previous efforts to create something in this province, I felt very proud of the quality of the work that was done but accepted that for reasons beyond our control it was time to say sayonara.

‘The history of journalism’

In 2009 we became aware that visits to The Independent website were still happening every day, a full year after we shut the paper down, with only headlines from the last issue to look at. That spurred the idea to resurrect again in electronic form only, and a family dinner a few nights later put some flame to the effort. My niece Emilie Bourque had recently graduated from the University of King’s College with a Bachelor of Journalism. She specialized in online journalism – I didn’t know that was possible. As she joked with me that night, print journalism classes were being referred to in school as “the history of journalism.”

With Emilie’s energy and passion for the idea of building a new web-based Independent, we started the job of putting together a team of contributors that could give us a broad perspective on Newfoundland and Labrador and its people. We didn’t realize we would be over 18 months getting ready to launch and going through several design and programming incarnations, but as I have often found in life, the results were worth the extra time and effort.

TheIndependent.ca is much more than just contributed stories from our staff and writers. It is a place for all to express opinions about what is happening in our homeland and a virtual gathering place for Newfoundlanders and Labradorians of all persuasions around the world.

Reflecting our own reality

Our province has changed a lot since the mid ’90s when it seemed like there wouldn’t be enough of us left by 2010 to have a decent party, let alone preserve our rich culture and deep heritage. Thanks to the oil we are now in our own economic reality once more – but this time it’s a good one. While the rest of the world has suffered tremendously the last two years, for the most part Newfoundlanders have been unaware of any recession, actually enjoying the best business conditions of their lives.

Rather than these good times making less of a requirement for a new Independent, I believe our current situation demands some focused and blunt discussion about our future. Now is the time to invest and build a Newfoundland and Labrador that is sustainable and vibrant and I just don’t see that happening, especially in industries that won’t disappear when the last of the nickel and oil are taken.

But that is enough for now and don’t worry … we will have lots to say about that and other things. I hope you like the new TheIndependent.ca as much as I do. Different time, different group, different world–but once again I find myself investing in the earnest efforts of young locals to provide a new media source in the province that gives more information, richer commentary and deeper insight into the news and events that affect Newfoundlanders and Labradorians. 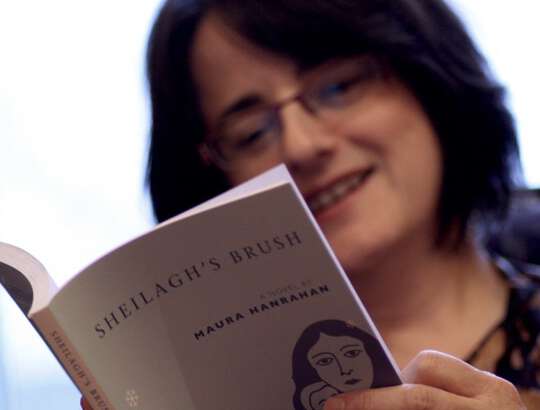 Maura Hanrahan on birth, artists & culture
Our Toronto correspondent Hans Rollmann catches up with Maura Hanrahan on her new book, 'Sheilagh’s Brush', and they chat on birthing babies, politicizing artists and…