Welcoming asylum seekers into our country is both noble and necessary. But doing it wrong could have disastrous consequences.

Justin Trudeau’s freshly minted Liberal government has announced a modified plan to resettle 25,000 Syrian refugees in Canada. The plan claims 10,000 refugees will be brought to Canada by the end of 2015, and another 15,000 by March 2016. The plan will prioritize taking in families, women and children, and maybe those persecuted because of their sexual orientation, but could exclude single men who are unaccompanied by family members.

The first obvious problem with this plan is the idea that a gay Syrian man would voluntarily disclose his sexuality while living in an over-crowded refugee camp where people are already fighting for their basic survival. In many Islamic-majority countries being gay is not only considered a social and spiritual sin, it is illegal — a “crime” that often carries the punishment of imprisonment or a violent, and sometimes public, death.

While Trudeau’s plan will no doubt help thousands of desperate Syrians, it does nothing to address the stigma and racism that is growing in the West and becoming dangerous. In fact, I would argue parts of this plan are worsening it by singling out a demographic and blatantly blanket labelling them as a security risk.

A second problem is the apparent lack of consideration of the scarcity of options these single straight (or gay) men left behind in war torn cities and the refugee camps have. Much of Syria is close to, if not completely, demolished by artillery fire, aerial bombing and explosions from government and civil clashes since 2011. This, in a country where the unemployment rate was already nearing 40 percent in 2014.

At this point in time, young, single men in the Middle East are extremely vulnerable, under-employed members of society — and a huge physical resource. Not to mention a coveted resource for organizations like ISIL and AQAP (Al Qaeda in the Arabian Peninsula), and the legions of rebel groups fighting in several countries across the region. When we leave this vulnerable segment of the population open to influence, radicalization, desperation and violence, when we have a way to at least intervene and help with the problem — who is to blame when that young man who is left behind by the global community turns to extremism?

[Y]oung, single men in the Middle East are extremely vulnerable, under-employed members of society — and a…coveted resource for organizations like ISIL…

What shouldn’t be overlooked amidst all the rhetoric of terrorism being based in religion, is the evidence that many acts of terrorism and even extremist groups are often politically motivated — resistance to occupation and intrusive foreign policies. I  don’t think I need to remind anyone of the West’s circular ignorance and consequential influence in the quagmire that now makes up our abstract conception of “the Middle East”.

These ideas are not new; there are several Canadian scholars who have been closely monitoring and studying them for a long time. Randall Hansen, director of the Centre for European, Russian and Eurasian Studies at the University of Toronto’s Munk School of Global Affairs, argued during a recent panel discussion that Canada should be taking in an upwards of 100,000 refugees. He said leaving millions of people, especially young men, in refugee camps without empowerment for too long can, in fact, make extremists out of people who, if given the proper opportunities, could become productive, peaceful new citizens of our country.

As for Canada’s responsibility, according to Lorne Dawson, a new religious movement and extremist expert with the University of Waterloo, the idea is to build trust in Muslim communities in Canada — especially since they will be growing.

Young men coming here as part of families will need intervention, support, education, and integration — and to not be stigmatized and alienated at an age when it is already common to find yourself struggling with your identity. Dawson’s research claims that a struggle with identity and a need for guidance can be one of the leading factors in the radicalization of young men in Canada.

Finding a solution to our refugee crisis needs to be evaluated within the scope of humanitarianism and empowerment, as well as through a security lens, because these two factors go hand in hand. Almost a year ago, in February, the Brookings Institute, an independent, non-profit think tank in Washington, published an article called IDPs, refugees, and violent extremism: From victims to vectors of change.

In it Khalid Koser, Executive Director of the Global Community Engagement and Resilience Fund, wrote that making the link between violent extremism and displacement may in fact force us to find better solutions for refugee crises.

“The risk of radicalization is especially heightened where IDPs and refugees find themselves in protracted situations: marginalized, disenfranchised, and excluded,” Koser wrote.

Conversely, he argues that this very link may also cause major problems in the movement and resettlement of refugees: “There is a real risk that focusing on displacement only as a cause or consequence of violent extremism will simply exacerbate the threat. It may become an excuse to restrict the entry of asylum-seekers, limit the rights of displaced persons, or force people home.”

In a way Koser’s words are slightly prophetic in how Canada is now handling its own refugee crisis, and why Trudeau’s plan needs to be carefully examined.

In my own experience working in a refugee camp in Northern Iraq, I have known several Syrian families who have since chosen to return to their hometowns—rather than chance the risk and red tape of immigration—and face the stagnant torture of life in a refugee camp.

It’s hard to imagine that the possibility of facing ISIL seems like a better choice than attempting immigration.

In 2014 I spent some time in Yemen working as an English teacher, though that time was cut short by a seemingly sudden and violent coup by the Houthi rebel group from the north of the country.

Yemen is a country that has no refugee plan. In fact, I’d be surprised if Trudeau could point it out on a map. But like Syria, Yemen has been ravaged by civil war and violent clashes between rebels and government forces over the last 20 years. It has been terrorized by an extremist group — only in this case it’s AQAP, not ISIL. Since March over 5,000 civilians, including children, have been killed as Saudi Arabia has dropped bomb after bomb on the already decimated country in a vain attempt to replace the government — all while the international community has looked the other way.

In Yemen I’ve had two close friends, young men, who have been victimized or driven to desperation by a lack of choice and radicalization. One friend, who didn’t want to fight—and couldn’t leave the country—resisted the rebel group as long as he could, but when he wouldn’t join them was arrested and has now been in jail since June. I have only had staggered communication with his brother, who remains in their neighbourhood, living in constant fear with the rest of his family.

“My brother isn’t even critical of politics,” he told me during an online conversation last August. “Many people in our neighbourhood announced their joining of the Houthi group. These days there are no police, there is no law…and the Houthis do everything by armed force. My brother refused! He wouldn’t accept control of our neighbourhood by these people.”

And at the same time, I have one friend who chose to fight. A kind, smart, caring, generous, hopeful friend who left behind his degree in translating to fight against the rebels with Ansar Al-Sharia — a branch of AQAP (Al Qaeda in the Arabian Peninsula). Is my friend a terrorist? I have never thought so, even now, knowing what he is doing. Do I think he is honestly and sincerely fighting for an ideology he believes in? Absolutely not. I think he had few choices to begin with, I think he was desperate, and I think he made a choice out of desperation. The last time we talked he joked, darkly, in almost perfect English because he had been studying translating for three years before the violence erupted “I am 24 and have participated in 21 battles in my country. Maybe this my calling.”

When I asked him if he felt the international community can help him, he replied, “They are pointless. We the people suffer the poverty and phobia. They don’t. They take planes and flee when the first gun roars.”

And he’s not wrong. It’s hard to justify working in a place like Yemen or Iraq when every single system seems to be corrupt, broken, and you’re surrounded by violence. And believe me, the novelty wears off very quickly — if it ever existed in the first place.

At the heart of this is the fact that as human beings we need to feel like we have the opportunity to be successful, happy and free.

But where does this leave the young men who are left behind? Last week, following the death of Ron Hynes, I was reading Joel Hynes’ open and honest tribute to the Man of a Thousand Songs, and a part of that tribute resonated with me. He spoke of all the young men from small towns in Newfoundland who have found themselves in prison for countless reasons: drugs, violence, mental health issues, and so on. I am only drawing on my personal knowledge here, but surely unemployment and social and political under-representation has at least contributed to our own crisis.

So I ask, what’s the difference between a young man from Newfoundland who can’t find a job, has no resources to help him, feels ignored by his government and turns to drugs or crime — or a young Yemeni or Syrian man who similarly feels overlooked, ignored, poor, and desperate and turns to radicalization or extremism?

Certainly, I’m inviting accusations of being a terrorist sympathizer or overlooking other major issues of security and the like — but at the heart of this is the fact that as human beings we need to feel like we have the opportunity to be successful, happy and free. When you take that option away from people they become desperate, and then it becomes about survival. People will do anything to survive. It’s not a choice, it’s an instinct.

It’s easy to treat human beings as objects, numbers, statistical groups and security risks — but every single individual has a story, like my two friends and the thousands of young Syrian men who will be left out of the chance at survival in the coming months.

So when we are actively excluding an extremely vulnerable population from the opportunity—of not only the chance at a better life, but the chance of survival—we should not be at all surprised when they pursue alternate options. 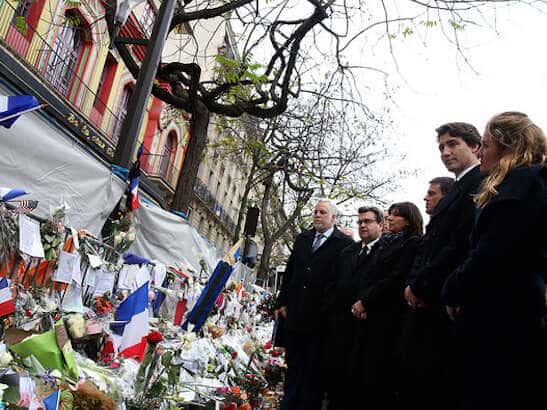 Time for N.L. Liberals to take real action on gender equality
Gender parity in cabinet would be a start.