While students and other segments of civil society take to the streets of Montreal and Québec City to oppose austerity, are Newfoundlanders and Labradorians prepared for the austerity measures headed our way?

Spring is here, the seeds have sprouted; budgets and beatings flourish.

Printemps 2015 (Spring 2015) is well under way. The call for a general strike across Québec has been made — something which surely would have never been discussed at such a magnitude had it not been for the printemps érable (Maple Spring) in 2012.

Three years ago a student strike focused primarily on increased tuition fees, government cuts in education, the privatization of post-secondary education and the right to sit at the negotiation table. By the end it had transformed into a massive social uprising, with marches of over 400,000 people demanding democracy while defending our right to legitimate dissent and protest.

Printemps 2015 has mobilized to combat austerity, and the movement’s committees aim to facilitate the organization of effective struggles for democratic and environmental rights. The movement has also positioned itself against fracking and any further hydrocarbon developments.

What is austerity? Essentially, it’s the every day Joe being forced to pay off a government deficit created by financial mismanagement at the hands of those who are supposed to represent that average Joe. Austerity is a move toward higher user fees for public services instead of free, or at least accessible, services through means like progressive taxation.

Not just a Québec problem

These issues are not Québec-specific. Last fall Newfoundland and Labrador Auditor General Terry Paddon planted the seed that some post-secondary students in the province could see increased tuition fees at Memorial University. Given the looming provincial election, however, it’s politically wise for Premier Paul Davis not to endorse a review of the province’s tuition freeze, and instead say it could be something his government will look at “several years down the road”. Watch out though – it’s coming sooner or later; we are inundated with the message that cuts have to be made to cover deficit spending, the falling price of oil being the scapegoat as to why that occurred.

“Be afraid of the looming economic crisis, Newfoundlanders and Labradorians, and be forewarned we are going to take things from you,” the government tells us. “After all, you ought to pay your fair share — it’s not like we can ask the big mining, fossil fuel and construction companies to pay higher taxes and take a cut in the millions and billions in profit they’re making off our lands and resources.”

What about the big companies who, without public oversight, are being awarded tenders on major projects like Muskrat Falls? Remember how Crown energy corporation Nalcor, which in 2010 paid its CEO more than half a million dollars, handed Montreal-based engineering giant SNC-Lavalin the largest contract on Muskrat Falls while SNC—the very company that moved Canada to top position on the World Bank’s blacklist of corrupt and fraudulent companies—simultaneously bribed corrupt governments elsewhere for construction contracts? SNC, of course, has been charged with bribery and fraud, one of its executives fleeing Canada and currently fighting extradition to return to face those charges.

Are the likes of these outstanding corporate citizens paying their fair share in Newfoundland and Labrador? Is it completely crazy to increase their tax rates to cover some of this deficit that threatens our public institutions like health care and education? How about Nalcor CEO Ed Martin’s salary? I mean, $565,000 a year is a fairly sweet deal. Maybe we could cut his and the other Nalcor executives’ salaries by 80 per cent and put that down on the deficit?

Standing up to austerity

As austerity touches the lives of every individual in society, Printemps 2015 is truly a people’s movement. As early as Sept. 30 of last year people began coming together in committees to organize what is now unfolding. Some of these were students, some were not. The movement’s base is comprised of all sorts: teachers, activists, lawyers, workers, the unemployed, artists, and so on. Its open and horizontal structure offers a place for everyone to participate in the way they choose.

Must we really wait to be told by our government which of our public services and programs will be cut or privatized? In the streets of Québec residents are not standing around and watching their public services be pillaged any further. They are making their disapproval known loud and clear. The claim that “everything is on the table” is nothing short of an outright lie from our government. Huge government-funded projects like Muskrat Falls will not see cuts, will they? No. The cuts will come from relatively inexpensive programs that bring much added value, socially and economically, to our communities. In the spirit of humility, I stand to be proven wrong. The budget will tell.

Outside of Québec—and to some degree inside, mostly from media propaganda—Printemps 2015 is being portrayed as another solely-student strike, which is misleading. To call this anything but a society-wide grassroots social uprising demonstrates a clear lack of understanding of what is unfolding in real time.

The Québec budget is out. The cuts are public knowledge. The contagion of revolt is increasing daily. Dozens of student associations have already voted on an indefinite strike. Demonstrations are happening all over the province. Campuses, along with the streets, are transformed into political spaces. Nightly protests are being held in Montreal. Universities are being blocked. On April 2, the province-wide general strike in defense of public services could see as many as 200,000 striking students take to the streets.

Most recently, the teachers association at the Université du Québec à Montréal (UQAM) voted to strike. The five unions in the Bas-St-Laurent region plan to block Highway 20 on May Day—International Worker’s Day—to increase pressure on the government in the hopes of influencing its policies.

First responders and police alike have stopped wearing their uniforms and are now sporting camouflage pants in protest. Some firefighters have lost their jobs and others suspended for their participation in protests against austerity. Even the city buses are covered in red square stickers calling for open negotiations.

We can’t be afraid

Printemps 2015 picks up where the Maple Spring of 2012 left off. Only a week and a half after March 21, which many see as the new “beginning”, thousands have filled the streets. What took months in 2012 has taken mere days in 2015. The repression against the movement hasn’t missed a beat either. Already we’ve seen mass arrests in Québec City and Montreal. On multiple occasions pepper spray has been used liberally. Last week 18-year-old student Naomie Trudeau-Tremblay was shot in the face with a tear gas canister at point-blank range, and police dogs have been used to attack and bite peaceful protesters. Now the UQAM administration is threatening nine students with political expulsion, a move some are calling “unprecedented” — though international support for the UQAM students is growing.

Here on the ground, though, the use of fear-mongering tactics by politicians and police are working to dissuade segments of civil society, including unions, from committing to joining the strike. People are genuinely afraid to come out. This is what makes Bill C-51 so dangerous, for it amplifies people’s fear — it scares people from making their voices heard. Even when they know deep down they deserve better, they become more prone to accepting the table scraps offered to them, in exchange for a vote of course. This is what governments want.

The violence aimed at quashing the Printemps 2015 does not come as a surprise — the ruling class will protect its self-interests, power and profit, by any means necessary. For the greatest enemy of the government is not some Muslim across the pond, but its own people.

A solidarity action is taking place in St. John’s on Thursday, April 2 at 6:30 p.m. at Harbourside Park. Click here for more info. 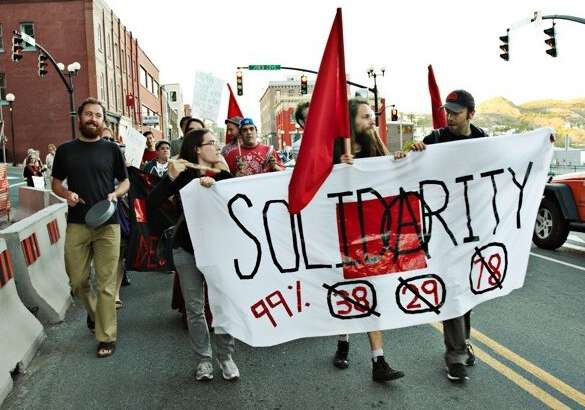