Cecil the lion, trophy hunting, and humanity’s desire to dominate.

This week, the world learned a wealthy American dentist (with clearly nothing better to do, as in, productive and useful for society and the planet) went on a “professional” hunting excursion in Zimbabwe’s Hwange National Park earlier this month and lured, shot, and killed a beloved local icon, 13-year-old lion Cecil.

The dentist from Minnesota, Walter Palmer, who paid $55,000 USD for the excursion, has since pseudo-apologized; rather, Palmer stated he’s sorry it was a beloved local favourite that he killed. Mainly, he just denied wrongdoing and insisted he was under the impression all aspects of the hunt were legal.

I’m not interested in whether or not this was “poaching” or “hunting” or whether or not Palmer believed his expedition was legal or not. He clearly does not actually “deeply regret” what he did, as his statement claims, since he has trophy-hunted many other large animals all over the place, including a leopard, elk, rhinoceros and big horn sheep. He is clearly happy to have killed those animals, having posted triumphant photos of his conquests with a beaming, pearly white smile.

“Again, I deeply regret that my pursuit of an activity I love and practice responsibly and legally resulted in the taking of this lion,” Palmer said.

This is a non-apology. It’s tantamount to saying, “I’m sorry you’re upset,” rather than, “I’m actually sorry.”

Organizing, paying for, and undertaking a hunting expedition to Zimbabwe clearly takes a lot of resources, effort, and thought, so it’s not like Palmer didn’t have the chance to learn more about the area, learn about the lions there, and reconsider this idea. He’s now claiming ignorance of the particulars of the hunt and the prey, deferring blame to his local hunting guides. Palmer is only sorry he’s in trouble and taking heat for the death of this particular animal.

I’m more concerned about what motivates a human to pursue trophy-hunting in the first place. What feeling is a person who trophy-hunts actually paying for?

A Guardian investigation reveals hunting tourism as on the rise in South Africa during the last decade. It’s an industry in which animals, such as lions, are raised in captivity and released into an enclosure specifically for wealthy tourists to kill as trophies. These aren’t wild animals. There is no challenge. They are raised only to be killed. It’s called “canned hunting” and it’s legal.

Trophy hunting and canned hunting are not like hunting for food, or killing for survival, or self-defence. This isn’t hunting to promote and ensure sustainable, local, non-factory farmed meat harvesting.

This is killing to feel powerful, to feel important, to dominate “the king of the jungle.” To take its head and hang it on your wall.

It’s not just pointless hunting, it’s deeply inhumane. It’s sadistic to use a bow and arrow—for the challenge, I suppose—only to miss a fatal shot and cause the animal to suffer and die slowly.

Cecil reportedly took 40 hours to die. If the thrill of a clean, quick kill is what Palmer is after, it’s hard to fathom how baiting, luring, and failing to successfully shoot the animal could make him feel powerful.

To inflict that kind of needless, purposeless pain and suffering on a living creature for no other reason than to know it’s within your power to kill it is unconscionable.

It’s about the fact that humans desire to inflict this kind of violence on other creatures at all. It’s about recognizing the deep and disturbing horror of that fact.

A few weeks ago, a conservation officer in British Columbia was suspended without pay for refusing to kill two black bear cubs. Their mother was killed by officers after breaking into and raiding a freezer filled with salmon and meat near the town of Port Hardy. As reported by several news outlets, the officer in question, Bryce Casavant, refused to destroy the newly orphaned cubs. As a result, the cubs are now at the North Island Wildlife Recovery Association in Errington, B.C.

Imagine if more people, with direct access to animals and the ability to affect animal welfare, were equally insubordinate? Imagine if we, as humans, didn’t take our own supremacy for granted, as some kind of foregone conclusion, and worked a bit harder to co-exist in harmony with the animals whose habitats and food sources we’re routinely impacting and degrading.

Loving and respecting animals has always been a cornerstone of my life since I was a child. I have a lot of mixed feelings about my access, as a human, to “own” animals as pets. I believe deeply in the value of animal companions, and the potential for human and non-human animals to co-exist as companions in domestic settings. But as I work with more animals I become more resistant to considering myself a pet “owner.”

I primarily work with and take care of small animals and have an ambivalent relationship with pet stores. I dislike and am wary of the commoditization of animals, yet without such establishments (as well as breeders) it wouldn’t be possible to have the chance to live with animals as pets. Yes, I primarily take in animals via a rescue, but most of those same animals originally came from pet stores. They were bred to be possessions.

Stores and breeders are a part of the commodity machine that provides us the chance to know and love and care for domestic animals, but it’s also part of the problem because too many animals are bred, and they’re too easy to purchase, too accessible to obtain as property. Yet, I wouldn’t want to give up the joy I get through caring for rats, guinea pigs, rabbits, and other critters. I wouldn’t want cats and dogs to not exist as pets and companions.

Can humans evolve to live more humanely with other animals?

Whether it is seven pitbulls found abandoned in a home in Conception Bay South in December 2013, or five cows, two sheep, and a goat found frozen solid on a Winterland farm in January 2014, we routinely hear of cases of animal cruelty and neglect in Newfoundland and Labrador.

Rescue organizations work extremely hard to rescue, rehabilitate, and rehome animals, but the cycle continues. More animals are obtained and neglected, abused, or discarded. We address the symptoms, but not the cause: the underlying, systemic misconception of animals as property.

We, as humans, have a fundamentally flawed perception of our entitlement to animals’ bodies and a frightening desire to dominate nature…

In June of this year, Quebec tabled a bill to consider animals “sentient beings” rather than property. The new law reportedly states “animals are not things.” The legislation applies to both domesticated and farm animals, includes fines up to $250,000 as well as jail time in certain circumstances.

Will Newfoundland and Labrador follow suit and strengthen the legal status of animals?

We need to move away from the view that animals are objects and property to “own”, and instead reorient ourselves as stewards with immense responsibility to the creatures we have domesticated. I don’t want to be a pet owner, rather a pet “keeper”.

From pet “owning” to trophy hunting we, as humans, have a fundamentally flawed perception of our entitlement to animals’ bodies and a frightening desire to dominate nature — to exert our power and flaunt our status as top of the food chain. Only we don’t have better teeth and claws and we aren’t faster and stronger. We need so many inventions to even compete.

We, as humans, have evolved to be dominant over other species and, in order to hold on to that dominance, we conceptualize our needs and whims as inherently superior.

Yet we are the species that demonstrates malice and a will to kill and destroy that is not in any way connected to survival or sustenance.

How, then, can we be the superior creature?

An earlier version of this article was published on the author’s blog on July 28, 2015.

Zaren Healey White is a journalist, web editor, blogger, and Master of Gender Studies candidate at Memorial University. She previously completed a M.A. in English at McGill. Zaren volunteers with two animal rescue groups in St. John’s and fosters small animals. You can find her blog at www.ofsugar-baitedwords.com and on Twitter @zzzaren. 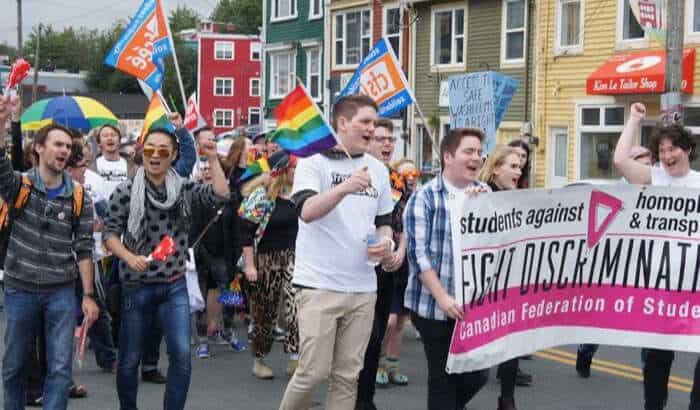 A quarter century of struggle, celebration and Pride
As unprecedented numbers marched in St. John's annual Pride parade Sunday, participants past and present reflect on LGBTQ struggles, achievements and the road ahead. (With…