Time to close the wage gap

Women in Newfoundland and Labrador are more likely to be university educated and substantially more employed than men in the province, yet face higher rates of poverty and lower rates of pay.

Despite a moderate debt-to-GDP ratio of 41.9 percent, the provincial government has chosen to adopt austerity measures to save money in the face of low oil prices. In its 2016 budget, Dwight Ball’s Liberal government cut 650 public sector jobs, a move that will deepen the divide between the incomes of men and women in the province as the public sector is an area where the income-gap is lower. This only scratches the surface, though, as Newfoundland and Labrador’s shortcomings in gender equality run deeper.

Many critics point to increased rates of participation of women in the labour force as a sign that things are improving, but this does not mean pay equity has been achieved. In 2011, the women-to-men earnings ratio (the average pay of women divided by the average pay of men) was 70.8 percent in this province. The City of St. John’s has a higher earnings ratio, measuring 77.8 percent. Believe it or not, these numbers are higher than the Canadian women-to-men earnings ratio, which stands at 66.5 percent.

Things don’t improve when you look at low-income earners. In 2013, the percentage of men living in low-income financial situations in the province was 12.4 percent, whereas the number of women living in low-income situations in the province was 14.4 percent. The Canadian figures are similar, with 12.9 percent for Canadian men, and 14.1 percent for Canadian women. Single mothers, Indigenous women, immigrant women, and women with disabilities are among the groups most likely to live in poverty.

Perhaps the most shocking aspect of these statistics is the fact that women in the province are more likely to hold a university degree and nearly as likely to hold a certificate or diploma than men, while also being substantially more employed. In 2015, 15.5 percent of women in N.L. aged 15 or older held a university degree or above (Bachelor’s, Master’s, PhD), compared to 13.5 percent of men aged 15 and over. In the same year, 36.2 percent of N.L. women in the same age demographic held a certificate or diploma, compared to 39.4 percent of men. Women in the province also have a significantly lower rate of unemployment. In 2015, the unemployment rate for women in Newfoundland and Labrador was 9.9 percent compared to 15.5 percent for men.

This gap certainly has a cost as well. According to The Organization for Economic Co-operation and Development (OECD), closing the labour force participation rate gap 100 percent in Canada could generate $1.94 trillion in gross domestic product by 2030.

The root of the problem

If women are just as educated as men, then why are they still being paid less? The answer is affected largely by culture. Women in Newfoundland and Labrador continue to bear the burden of unpaid household chores, childcare, and providing long-term care for family members and friends (40 percent of women put aside 10 or more hours a week for this last activity, compared to 28 percent of men). Furthermore, many women suffer from discrimination if they don’t take time off work to care for their newborn children, just as men can suffer discrimination if they do.

Though some improvement has been seen in recent years, violence against women is still a major problem in the province. According to Statistics Canada, in 2014 2.1 percent of the population self-reported being a victim of spousal violence in the past five years, down from 5.1 percent in 2004.  According to police-reported data, women are nearly four times more likely to be the victim of intimate partner violence than men, and intimate partners are the most common perpetrators of violence against women.

In 2014 approximately 4.5 percent of the population self-reported being the victim of a violent crime (sexual assault, physical assault, and  robbery) in the past five years, down from 8.7 percent in 2004. This finding is primarily due to the fact that the sexual assault rate—a crime in which the vast  majority of victims are women—remained stable over the past decade, while the rates for robbery and physical assault, in which the majority of victims are men, dropped significantly since 2004. Still, the provincial government estimated in 2006 that approximately one half of the women in the province will experience sexual or physical violence at some point throughout their life.

Sexual and intimate partner violence tends to increase during times of economic stress.

In 2004, nine percent of women and four percent of men self-reported being the victim of stalking at least once in the past five years. In a one-day snapshot from 2014 Statistics Canada found 32 women residing in shelters across Newfoundland and Labrador because they were escaping spousal abuse. In the same year, they further found that an average of 22.4 women and children were admitted into a shelter each week. Sadly, 2014 was the last year for which province-wide self-reported violent crimes rates were measured so it is difficult to tell whether or not rates have gone up or down, but some experts have pointed to the fact that sexual and intimate partner violence tends to increase during times of economic stress. It is also worth noting that the numbers presented here likely understate the problem, as many victims of violence do not report the crime to the police, or even through confidential self-reported surveys such as those the above data is drawn from.

What can be done about it?

The provincial and federal governments have a large part to play.

Firstly, both governments need to implement pay equity legislation for their public sector employees. This means the federal government needs to repeal the Public Service Equitable Compensation Act (PSECA), a law introduced in 2009 that, despite its name, does not ensure equal pay. This is because the PSECA changed the law so that pay equity issues are sorted out through collective bargaining between union and employer instead of the Canadian Human Rights Commission. Unions are not as well equipped to handle pay equity issues, as collective bargaining contains inherent compromises; pay equity can be divisive as it affects only a section of the workforce, and hence may be perceived as undermining solidarity.

Moreover, the federal government should implement the recommendations of the 2004 Pay Equity Task Force. The task force makes dozens of recommendations, perhaps most importantly the adoption of a new, stand-alone pay equity law that will cover women, as well as workers of colour, Indigenous workers and workers with disabilities.

Secondly, both the federal and provincial governments should put forth a plan to give their citizens more affordable childcare, since high childcare costs mean that it is not economically worthwhile for many parents to work full-time. This second point is of particular significance because of the massive amount research indicating the importance of early childhood education in a child’s development, as well as the fact that St. John’s has the second most expensive infant child care fees of any city in the country ($1,394 a month in 2014).

We all have a responsibility to support women, to speak out against violence and discrimination.

Thirdly, the province should invest in a provincial plan to address violence against women. This plan should include annual surveys on violence against women, increased funding for social, legal and health services (including domestic violence courts, sexual assault nurse examiners, and crisis centres and shelters). And finally, increased funding to the Women’s Policy Office would allow its to fund women’s groups to conduct independent analysis and advocacy.

Sadly, the 2016 provincial budget will also do little to combat gender inequality, as the tax increases introduced will likely disproportionality affect the poor, who are more likely to be women.

On an individual level, we all have a responsibility to support women, to speak out against violence and discrimination. And for all my fellow men out there, wherever possible you need to help more in raising your children and looking after your parents. Closing the gender gap not only makes sense for economic growth and job creation, it is also a moral imperative.

Benjamin Sturge has a background in economics and statistics and currently works for Memorial University’s Collaborative Applied Research in Economics (CARE) initiative doing economic forecasting. He hails from Lumsden and has an interest in social, economic and political issues affecting the province. His views are not representative of MUN or CARE. 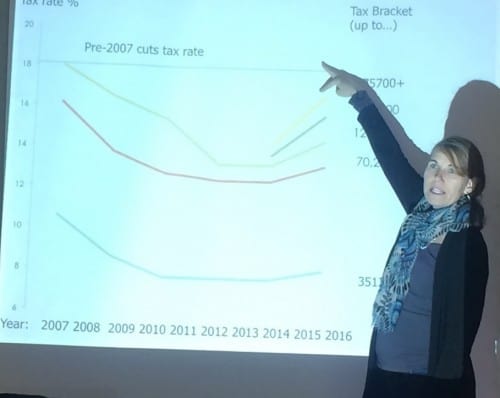 Austerity “an ideological choice, not an economic choice”: economist
The Liberals’ turn to austerity in Budget 2016 to address the province’s deficit will do more harm than good and could “kill” the economy, says…

Budget 2016: Keeping up the pressure
There is still time to stop this budget.