Trump “has done us a favour”: Gwynne Dyer

One of Newfoundland’s most famous intellectuals argues the U.S. President’s election in 2016 offers valuable insight into American politics and society before it’s too late.

On Election Day in the U.S. last November, the ballot offered a choice between a candidate who represented the aristocratic status quo and another who promised to ‘drain the swamp’ and start anew.

Fast-forward almost a year to the present day and it seems evident things south of the 49th parallel have never been murkier.

“Quite likely the most boorish man to have come near the presidency in the history of the American republic,” and “transparently unfit for the office,” are just a couple of the ways Gwynne Dyer described U.S. President Donald Trump during Dyer’s 2017 Galbraith Lecture in Public Policy at the St. John’s Convention Centre on Sept. 11.

However, it was Dyer’s “enormous, orange canary [in the coal mine] issuing tweets” line that received the biggest reaction from the more than 900 people in attendance.

Of course Dyer wasn’t back home in his native Newfoundland to crack jokes or share stories about how much of a social or political monster Trump is.

The author, historian and internationally published journalist was in town to offer his take on why Trump, a self-financed political novice, was successful in his bid for the presidency and what we, the citizenry of the Western world, can do now that Trump has unrestricted access to the world’s largest nuclear arsenal.

Hundreds, if not thousands, of journalists, intellectuals and pseudo-intellectuals alike have opined on the Trump phenomenon and hypothesized on how the present situation came to be.

Dyer, for his part, stated it rather simply: circumstances, not stupidity, led to Trump taking up residency at 1600 Pennsylvania Avenue.

Jobs (and/or the absence of them)

What catapulted Trump to occupying the most powerful seat in American politics can be partially explained by examining who voted, Dyer stated, arguing Trump’s divisive language on the campaign trail resonated with millions who perhaps feel left out in the ever changing, globalized world we now live. Trump stoked the embers of civil unrest and harnessed the friction it caused to ride the populist wave to power.

Like the industrial towns and cities in the north of the United Kingdom, the Rust Belt of the United States has been suffering particular economic hardship in recent times. Staggering unemployment and the lack of meaningful work has forced many to lose hope and in turn blame others for their lot in life.

We frequently hear people can’t find work in the U.S. because of immigrants, outsiders coming into the Land of the Free and stealing jobs away from ordinary Americans. Trump himself made this a rallying call during his campaign. But as Dyer noted, where there are no jobs in the U.S., there are no immigrants.

So where are all the jobs then? Why are we witnessing a shrinking of the middle class? What’s going on with the economy?

Scapegoats, trends and the looming robopocalypse?

In Dyer’s opinion, globalization (i.e. global free trade) and the practice of offshoring jobs ranks as the least impactful, yet most talked about topic with regard to employment.

“I have never managed to believe that this is the major issue, although it was the major issue Mr. Trump harped on endlessly in his political campaign and it was an issue that Mrs. Clinton, like it or not — I think she didn’t like it — also had to deal with. She was unable to offer the same kind of radical solutions that Mr. Trump was because, in fact, they involved smashing all the property, leaving NAFTA, leaving the Trans Pacific Partnership,” Dyer explained.

“I think the long-term damage was mostly done by what we call the neoliberal economic doctrines that came in with Margaret Thatcher in Britain and Ronald Reagan in America in the 1980s.”

Since that time, we have witnessed how the narrative that maintained the hidden hand would deliver the goods has ushered in marketization, the dismantling of trade unions and the replacement of the welfare state by free market principles.

Neoliberalism, Dyer continued, “became, and has remained to this day, the only doctrine on the table; it looks like common sense because there’s no alternative doctrine on offer. It has the effect, of course, of crushing the working class.

“We shouldn’t have stopped talking about it [the working class] — that’s the issue.”

In terms of where we are heading, Dyer suggested the clear and present danger is to accept that there is no alternative on the table. Adding to this cloud hanging above our heads is the profound disconnect we see between the policy preferences of those living on minimum wage and what actually happens in Washington.

Sprinkle in the advent of automation and we have a recipe for what some have dubbed an imminent robopocalypse.

The rising use of computers and robots in the workplace is an underappreciated facet of the direction the global economy is taking. According to a highly referenced 2013 study out of Oxford University, upward of 47 percent of American jobs in the next few decades could become automated.

“The wonderful thing [from an employer’s point of view] about an automated workforce is that it doesn’t talk back. Also, you don’t have to pay it — no holidays, no sick leave, nothing.”

The question, then, is what those people who have lost, or face losing their job — and possibly a sense of their identity — do.

While it could be suggested that automation is the elephant in the room no one wants to address, the Obama administration’s Council of Economic Advisers once advocated for placing further emphasis on education and research funding. Trump, for his part, seems content with placing blame for American job losses on immigrants and the Chinese.

It’s obvious that technological change and the automation of repetitive, routine tasks — blue and white collar alike — are here to stay. We need not look far to find the rise of the robots around us today: Apple’s Siri and Amazon’s Alexa; Google’s autonomous automobiles project, Waymo; the ATM at your local bank or convenience store.

What we don’t know for certain, however, is to what extent automation will affect the future. It is Dyer’s opinion that the concept of universal basic income might be one way to deal with the economic transition.

“It’s hard to see how we will stop this train,” Dyer said. “A lot of people, including I, are attracted to the idea that [universal basic income] might be one of the ways you deal with a huge economic transition that you cannot stop.”

“Does it solve all of our problems? No it doesn’t, but it sure takes the edge off a few that otherwise will carve us to pieces as we go down the road with automation.”

In the end, Dyer achieved what he set out to do: help illuminate the waters of a political world mired in media spin and misinformation.

“I think inadvertently, certainly unintentionally, [Trump] has done us a favour. He has shown us that things were not as calm and steady and predictable as we thought they were, he’s exploited resentments and inequalities that we weren’t aware of or weren’t paying attention to, and he certainly set the world on its ear,” Dyer said, adding this “may have been better to do now than wait for a bigger explosion later on.”

Luke Barry, a native of St. John’s, studied political science at Memorial University, journalism at Centennial College in Toronto and law at Aberystwyth University in Wales.

Muskrat Falls Inquiry doomed before it starts?
An Inquiry is too important to be dragged into partisan bickering. 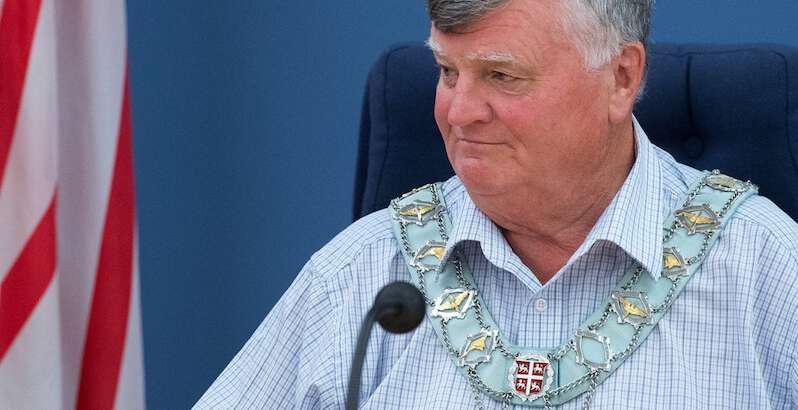 Claude Elliott is no hero of mine
The success of ‘Come From Away’ cannot invisibilize the outgoing Gander mayor's refusal to embrace the rights given to LGBT+ Canadians.