With spring comes new life, and a thawing reminder of human activity’s cumulative effects on the natural environment.

For the last several weeks – possibly months – I’ve been enduring the Facebook and Twitter updates of friends and acquaintances about spring. The constant updates and pictures of the warming temperatures, the melting snow, and the first hikes, jogs, and patio beers of the season have left me feeling a little behind.

But after a couple weeks of temperatures into the -20s (yes, in May), spring has finally arrived in Arviat. Well, if you call one and two degrees ‘spring’, that is. But a bright sun high in the sky is enough for much of the wildlife to return and for the snow to start melting fast. See my column from this time last year for a picture of our annual snow-melt moat.

The arrival of spring is marked by many things in the North, but perhaps none is more important than the spring fishing derbies, which take place in virtually every community in Nunavut throughout May. They are a highlight of the season, and people often plan their vacations and family visits around them. The prizes are huge – up to $12,000 for the first place fish.

There are two major derbies which take place over two weekends. The trout derby allows people to fish at lakes and rivers up to 100 kilometres from the community, while the cod derby takes place on the sea ice immediately next to town. With such large prizes at stake, the competition can be fierce.

Fierce competition notwithstanding, the whole community comes out to celebrate. The weekend of the cod derby, the sea ice outside of town was a sea of activity, with ATVs and snowmobiles constantly going back and forth between town and the dozens of tents and shelters that had been set up on the ice. People cook food, have parties and generally celebrate the return of the sun and the warmth with the event. It often seems like the fishing itself is just tangential, an excuse to have the celebration, and it doesn’t really matter if you catch a fish or not. What’s important is spending time out on the ice with your family and your friends.

Fish are typically plentiful during the derby season, but this year I heard people talking about both the declining quantity and size of the fish being caught. Like any wild populations fish stocks rise and fall, and being wild animals they move about, so this isn’t necessarily an alarming indication.

What I found more surprising – maybe even alarming – was the fact that, since cod are not traditionally eaten by Inuit, most of the fish caught during the competition are not eaten by people, but rather tossed in a bin to be used as dog food. I suppose this is better than wasting them, strictly speaking, but seeing hundreds of pounds of good cod tossed away is a bit of a shock to a Newfoundlander’s system.

The story under the snow

The other sure sure sign of spring is within the melting snow. It’s great to see hints of ground cover showing through again, touches of green and brown on what was a pure white land for so many months. But also underneath the snow is eight months worth of hidden debris – pop cans and cigarette packs and building material, discarded or simply blown away over the winter and now re-emerging into view, covering the ground and floating on the melt water. There will be a large spring cleanup undertaken by the Hamlet with the support of the community, but much of the litter, which blows out of town before the cleanup, will never see human hands.

Spring in Nunavut is mainly a time of renewal and rejuvenation, and rekindling relationships between family and friends. But this year I’ve also been reminded that even in a land as big, fertile, and sparsely populated as Nunavut, people and their activities can still have quite an impact.

The views and opinions in this column are those of the author alone, and are not necessarily those of the Hamlet of Arviat, Government of Nunavut, any of their departments or agencies, or anybody else. 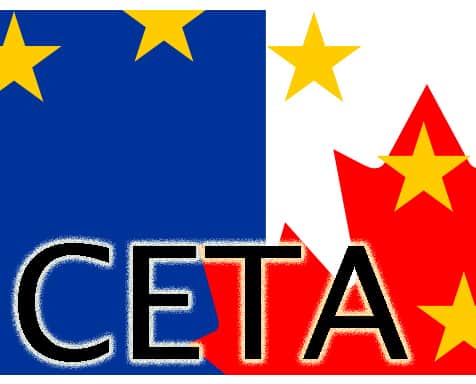 CETA on our doorstep
As the enormously controversial Canada-European Union free trade deal looms, details of the negotiations are being kept secret by the federal and provincial governments. At…

“To resist for the sake of a single tree”
From the centre of Istanbul's protests this week, Hans Rollmann reports on the rising of a powerful social movement and the violent state terror it…