COMMENTARY: How and Why We Fish (Part 2)

Our current food crisis compels us to ask: what would it take to feed the province with fresh, local cod instead of global markets?

Earlier this week, the Independent explored how we fish, using northern cod as the exemplar. That commentary (and this one) is an entry-point for discussions on ways to modernize Canada’s fisheries practices. The mere mention of the term “modernize” spurs ideas about fisheries advancements that qualify as bigger, faster and more technologically driven.

But we’d like to suggest what’s old could be new again. We’ll start with an anecdote—one that opens Part 2 on why we fish. We again rely on Newfoundland and Labrador’s mascot fish (if ever there was one), northern cod.

It’s Good Friday and whether observed for its Christian calendar or not, people are accustomed to a meal of fish on this day. For those fortunate to have frozen cod on hand (even more so if it’s your own catch from last year’s food fishery or locally bought from a commercial fisher), they are readying long-cherished family recipes.

For some families in St. John’s today, enjoying a meal of local cod starts in earnest, with a dish of cod-au-gratin prepared and delivered to their doorstep.

These efforts are part of the Fish For Friday project, made possible thanks to a number of local organizations. Fishing for Success purchased the cod from Petty Harbour fishers and processing plants; Stone Soup, Community Centre Alliance, the Social Justice Co-op, and the Jimmy Pratt Foundation identified the families in need through their “COVID-19 Food and Services Hotline;” Get Stuffed restaurant prepared the meals; the YYT Food Aid Coalition delivered all 200 meals; and Too Big To Ignore offered assistance in planning, organizing and promotion.

Gifting a meal of local cod is a gesture befitting the occasion. Not only is it in keeping with the “do unto others” spirit of the holiday, but it comes at a time when the hardships brought on by COVID-19 have exacerbated the prevalence and severity of food insecurity for many families. For the charitable foundations and businesses supporting this cause, it also grants a material boost. Consider the commercial fishers and processors gaining a sales opportunity at a time when the fishing season remains closed, as one example.

Now consider if Fish for Friday happened one Friday of every month? Or every Friday? The rationale certainly exists. The latest national data on food insecurity shows Newfoundland and Labrador (NL) has among the highest rates across Canadian provinces; and St. John’s is among the most food insecure metropolitan areas of anywhere in Canada [see the University of Toronto’s Proof Canada’s work, which relies on data from Statistics Canada’s Canadian Community Health Survey (CCHS)]. Less than 10 years ago, the same data found Newfoundlanders and Labrodorians experiencing the lowest rate of food insecurity.

What happened? A decade ago, NL was in the midst of an oil boom. The province was also leading its poverty reduction strategy, allowing those on income assistance to keep more of their earnings, which in turn could be used for everyday necessities like groceries. Given what gets measured is often what matters, the provincial government’s decision to stop tracking food insecurity data obscured what was a ballooning problem. The federal government’s 2016 decision to make CCHS-reporting mandatory revealed the severity of NL’s food insecurity problem.

Arguably, the province’s relationship with food has always been challenging. Since colonization, Newfoundlanders and Labradorians have relied on imported foods, particularly over winter. These days, ferry service shutdowns repeatedly lay bare the problem on local grocers’ shelves, particularly in northern coastal communities. This winter made the fragile nature of the province’s food systems even more plain to see. First, with a record-breaking snowfall dubbed “Snowmageddon;” now, with an ongoing pandemic; and that’s all in the midst of a bleak economic period as oil boom promises have gone bust once again. These events and the effects they’ve had on the everyday Newfoundlander, show when it comes to food, many live on the brink of going without.

Simple answers—like building a tunnel to open road access for food delivery, or putting all of our dollars toward food banks—ignore root causes requiring long-term solutions. Without question, food banks serve an important role in hunger relief. But they do not address the underlying drivers of food insecurity, especially poverty, nor food sovereignty measures supporting community resilience and self-reliance—for example, encouraging people to sow their own lands and fish their own seas. Imagine if communities enjoyed the right to “healthy and culturally appropriate food produced through ecologically sound and sustainable methods, and . . . define[d] their own food and agriculture systems.” That’s the definition of food sovereignty offered by Food Secure Canada.

Some of you remember the stories of your ancestors, for whom this right was a reality, especially in coastal regions. Just like baited hook-and-line has its advantages (for the fish, the fisher and their community, as we described in Part 1), so too does making what’s old new again in our food systems. And yet, the concept of fish as local food is often the last consideration among the reasons we fish. Commercial profit and game or recreation often outrank time-honoured tradition, ceremony and food.

Recognizing this is an unprecedented season, the commercial fishery in this province is otherwise valued at one billion dollars annually, with the majority of that value credited to wild fisheries. In 2018, the industry value was $1.3-billion, 84 per cent of which was attributed to wild fisheries, and the remainder to aquaculture.

While cod landings dropped that year, they still accounted for nearly one-fifth of the $118-million landed value of groundfish (roughly $23.4-million). And where did that cod go? “The United States and the United Kingdom were the largest export destinations for Newfoundland and Labrador cod, representing 44 per cent and 30 per cent of total cod export value, respectively,” reports the Seafood Industry Year in Review 2018, a report compiled annually by the provincial Department of Fisheries and Land Resources.

Our current food crisis compels us to ask: what would it take to support feeding local people with fresh, local cod (creating an economy of care) instead of solely feeding highest bidding global markets (an economy of capital)? If we believe food is a right, then we have our answer. Programs like Fish for Fridays supply some of the necessary details around how we could turn our values into longer-term actions.

“Only a crisis—actual or perceived—produces real change. When that crisis occurs, the actions that are taken depend on the ideas that are lying around,” said Milton Friedman, economist and father of neoliberalism. As with our commentary about how we fish (Part 1), there’s more to say about why we fish (Part 2), and who gets to fish—gender equity and opportunities for youth are important considerations in a modernized fishery, too. The best-available data tells us we are in the midst of crisis. It’s within our abilities to address this crisis head-on by harvesting the best and brightest of local skills and expertise.

Jenn Thornhill Verma is a freelance journalist and author of Cod Collapse: The Rise and Fall of Newfoundland’s Saltwater Cowboys; Dean Bavington is an Associate Professor in the Department of Geography at Memorial University of Newfoundland and author of Managed Annihilation: An Unnatural History of the Newfoundland Cod Collapse; and Kimberly Orren is co-founder of Fishing for Success at Island Rooms of Petty Harbour and spearheaded the Fish for Fridays program. 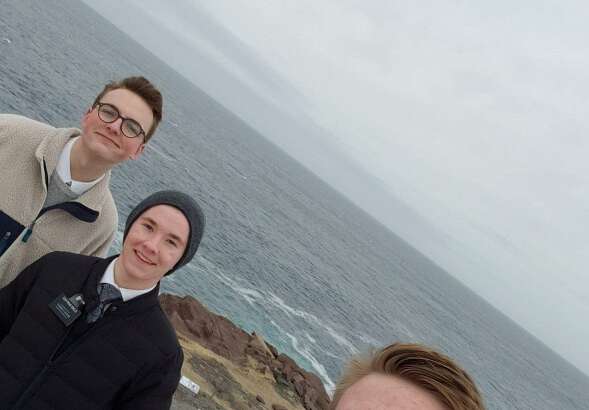 Mormon Missionaries Find St. John’s a Rock in the Storm
Given the situation in America, the families of the young missionaries are more relieved than worried that they can’t get back to the United States.