We have some suggestions on how to pay for a boondoggle.

That is how much Muskrat Falls will cost the average household in Newfoundland and Labrador.

The original plan was to pay for Muskrat Falls by increasing our power bills. Now the plan is to avoid increasing electricity prices and instead pay for Muskrat out of government revenue (i.e. taxes and service cuts). This policy is called rate mitigation.

Based on testimony by officials from NF Power and NL Hydro at the Muskrat Falls Inquiry (and my own calculations), it will cost the NL government about $450 million per year to maintain power rates at current levels, with increases for inflation. Divided between 268,000 customers, that works out to nearly $140 per month, per customer.

But Weren’t Prices Supposed to Rise With or Without Muskrat?

Back in 2012, NL Hydro predicted that Island energy load would grow by 32 per cent over the next twenty years. This was fundamental to the case for the Muskrats Falls Project.

Today, we find NF Power sales have actually declined over the last four years and NL Hydro “see little change in customer needs over the next ten years.”

Combine this with a big drop in fuel prices since 2012 and I see no reason why electricity prices would have gone up significantly if Muskrat Falls had never happened.

The government is right to mitigate electricity rates for several reasons.

When Muskrat Falls is completed it will generate far more energy than we need, so most of the energy will be exported. Unfortunately, because we don’t have much power to spare in the Winter, most of our sales will occur as short term contracts at low prices (only 2.5 cents per kWh according to a report by Synapse Energy). Better to keep rates low to encourage households and businesses to use the energy locally, rather than export it a bargain prices.

If we pay for Muskrat through our power bills, then the burden will fall mostly on the 70 per cent of households who rely on electric heat, rather than the 30 percent who use oil. Muskrat Falls was a political and institutional decision, so how we share the burden of paying for it should not depend on how we happen to heat our homes.

Power bills are subject to HST, which means if we add $450 million per year to our power bills, we are also sending an extra $22 million to Ottawa every year in taxes. We can keep that money in the province by paying for Muskrat with government revenue instead.

There are a lot of good reasons to mitigate power rates using government spending. However the Ball Government plan is a kludgy quick fix. Over the longer term we need to rethink the principles we use to price electricity.

We currently set electricity prices using the cost recovery principle: the PUB determines how much the system costs to operate, and rates are set to cover that cost plus a regulated rate of return. This method has the virtue of being easy to understand, but it ignores a lot of important factors.

Economists argue that a more efficient way to price electricity is to base it on something called the “marginal cost” of electricity. To understand this concept, imagine you are deciding whether to buy an electric car. If you do, it would require maybe 200 kWh of electricity per month to run. This would force NL Hydro to generate an additional 200 KWh of electricity each month, which costs them some money. Marginal cost pricing would mean your power bill goes up by the same amount as NL Hydro’s expenses go up. That way you bear the full cost of your decision and this should align your personal incentives with the public interest.

Admittedly, marginal cost is a tricky concept when you have to consider long term load growth, capacity issues, and uncertain export markets. But policy makers should at least consider these ideas when setting electricity prices. The cost recovery principle is way too simplistic.

We should also rethink utility planning more generally. In the past, we have simple-mindedly built new generating facilities to satisfy predicted increases in demand for electricity. Instead, we should adopt a more holistic approach, to manage both supply and demand. This was recommended by the Muskrat Falls Joint Review Panel back in 2011, and received a lot of discussion during the Inquiry.

To summarize: Muskrat Falls is going to cost a lot of money; rate mitigation is an efficient, fair, and progressive policy to pay for it; in the long term, we should develop a framework to set electricity prices using explicit economic principles, rather than leaving it to arbitrary political judgement.

Photo by Government of Newfoundland and Labrador. 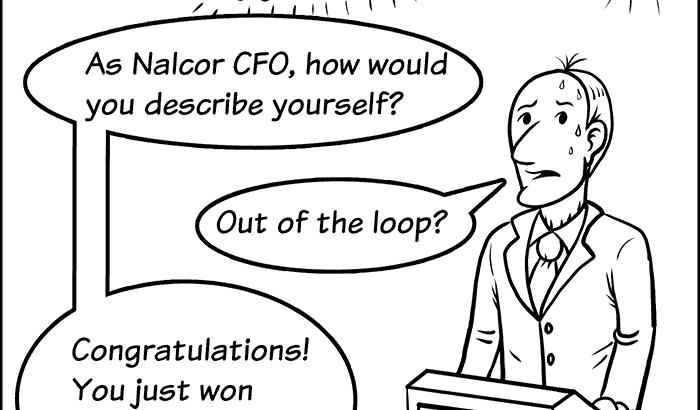 Indy Inks (15 November 2019)
Step right up! It's time for Muskrat Madness, Newfoundland and Labrador's favourite gameshow! Where will your money end up today? Who knows! Reason is dead!