With the premier out of the picture, it is harder to hide the hungry abyss at the heart of Newfoundland and Labrador politics.

This week, Dwight Ball abruptly announced his resignation as Premier of Newfoundland and Labrador. He was first elected in a landslide on 30 November 2015 and more narrowly re-elected less than a year ago on 16 May 2019. Although the man is deeply amiable and personally inoffensive, few will miss a tenure characterized by dithering, cowardice, and entitlement. The public response ranges from relief to anxiety. With the premier out of the picture, it is harder to hide the hungry abyss at the heart of provincial politics.

In discussing politics in Newfoundland and Labrador, it is popular to focus on individual personalities to the exclusion of other factors. While it is important to contextualize the premier as but one part of a greater systemic whole, centreing the person is largely unavoidable. Most state institutions here are either underdeveloped or malformed, so the premier and his office exercise considerable influence in policy making and governance.

Dwight Ball found himself in the premier’s chair because he encountered no resistance climbing the staircase of small-town career success. He climbed each step as he found it, from the boardroom table to political office, to party leadership, to Joey Smallwood’s desk. He climbed that final step at the top of the pyramid and floated away into the air like a balloon, blowing whichever way the wind took him.

This is risky in fine weather; so much the worse through rolling storms.

While he studiously looked the part, Dwight Ball was not a serious politician. Ball had a preternatural talent for stumbling into what may politely be termed as “unforced errors.” He was only ever loosely tethered to the earth below.

As premier, Ball could be cavalier with reckless (and often false) commitments. This was one of the defining features of his administration from the very beginning. Nothing was ever what it appeared to be at face value. The 2015 campaign was a total fraud: no tax hikes, no layoffs, and a balanced budget in four years. (We got an $800 million tax increase five months later.) Even granting that the outgoing Tory administration fudged just how bad the economic condition was, the does not explain or justify the Liberal extravagance with fantasy promises.

This pattern extended to everything the Ball Liberals touched. It’s the $2.5 billion* “Atlantic Accord”—i.e. a $3.3 billion cash advance on the federal government’s Hibernia shares, spread out over 37 years, backloaded with $800 million in servicing fees to be paid back in the 2040s and ’50s. It was constantly announcing an unfinished rate mitigation plan as a finished rate mitigation plan, hinging on an annual $200 million in imaginary money from Ottawa. It’s declaring that we will be the energy capital of Canada by 2030 because “well, why not?” It’s witnessing Justin Trudeau’s 2017 apology to residential school survivors in Labrador and then announcing that he was also going to give an apology and then never doing it. (See also: wetland capping at the Muskrat Falls reservoir.)

But while on occasion the premier said one thing and did another, most of the time he was never saying anything at all. I say this with earnest admiration: Dwight Ball is a true master of bluster. Even soft questions would go unanswered, transformed by the premier into a linguistic adventure that picks you up and whirls you around and lays you down again on the far side of the tracks from where you started. It is a gift when you’re working the campaign hustings but quickly breaks down when you’re running the government. Anything important would be buried in so much gloss and dross that the truth was always an expedition—and when you inevitably turned up empty-handed, the premier had bought just enough time to come up with a new wild goose chase. (And even if you turned up with your hands overflowing, it didn’t make a lick of difference.)

The Way Forward, crown jewel and guiding document of the Ball government, in many ways mirrors its creator. Much like a blinkered horse, the premier is easily startled. He moves forward relentlessly, uninterrupted by sight of the world around him, even if the carriage he is pulling has caught fire. There are no rearview mirrors on this ride—unless there’s an opportunity to remind you that the Tories shagged up Muskrat Falls.

We must give the devil his due. No one can say Ball had an easy ride. You would be hard pressed to find a worse setup for a premiership. The Liberals had to clean up the afterparty for the province’s short-lived boom years while everyone was still hungover. Basic infrastructure is crumbling everywhere while the province is hamstrung in a delusional Nalcor scheme to use the electricity grid like a credit card. We will be untangling ourselves from it for the better part of this century. And for what it’s worth, not many sitting premiers get the chance to help solve murder investigations, either.

But we can carry our sympathies no further than this. Dwight Ball was in office long enough to make choices to deal with the issues we faced. He largely either chose poorly or deferred making any choices at all. The Liberals 2016 budget was a hamfisted attempt to dole out tough medicine for tough medicine’s sake, and after they walked it back the premier was too scared to make any other decisions again. He let Ed Martin sail over the horizon on a golden parachute. He presided over a caucus so allegedly toxic that it fostered a generalized harassment scandal at the House of Assembly. He would ignore bad news in the hopes that it went away, and when it didn’t, he would show up to dig the hole even deeper. Lather, rinse, and repeat, every other week for more than four years.

The Ball government lurched from one self-inflicted scandal to another and was literally unable to stop. Carla Foote may deserve a job, but the premier’s own caucus could no longer say the same about him.

Ball was handed two opportunities to address the province’s growing economic and political malaise and botched both of them. As he leaves, the Liberal party has been tasked with finding and crowning a new leader before the end of April and/or the next provincial budget. The urgency behind this quick turnaround makes more sense when cast against the backdrop of ongoing coalition talks between the opposition parties, independents, and some dissident Liberals. The Liberal party brass, meanwhile, is hoping that they can use this brief 8-to-10 week window to install a new leader and hold off any major political upsets before an election in early 2021. We are about to enter an ugly spat about democratic legitimacy. The countdown to the next campaign has already started ticking.

The stakes are high and the province is cruising further into strange political waters. With no respite from mounting economic calamity and no obvious favourites for premier either in or out of the House of Assembly, Newfoundland and Labrador awaits the appearance of a champion. But the benches are thin, and the skies are dark. We may be waiting for a while.

Meanwhile, now-interim premier Dwight Ball prepares for the grand finale. His legacy assured—he has escaped becoming the first Newfoundland and Labrador premier to be defeated after one term. Now he’s just gotta run down the clock this one last time and he’s finally free of the burden. He had fun driving us in circles for a few years but he’s dropping us off where he picked us up and wants to speed off into the sunset.

It’s frustrating, but his departure is almost a relief. Until you remember that our real trip is only just beginning.

The Dwight Ball Exit Interview
In his own words, Dwight Ball reflects on his resignation, achievements, and legacy as the 13th Premier of Newfoundland and Labrador. 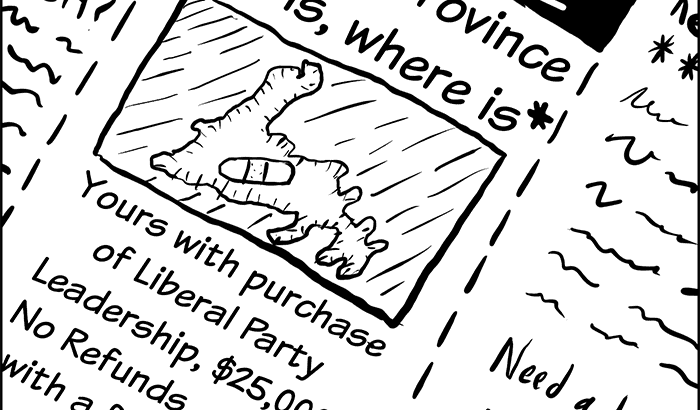 Indy Inks (24 February 2020)
BATTERIES NOT INCLUDED. NOT LIABLE FOR ANY CRUSHED SOULS AND/OR DESTROYED DREAMS RESULTING FROM BECOMING PREMIER.