A 2021 Newfoundland and Labrador Election Diary

Sure, the election’s not over yet, but we’ve all been through so much together already, so why not get a little nostalgic?

This election was supposed to be quick and painless. It’s turned out to be long and uncomfortable (certainly for anyone who got a COVID test swab).

I’ve been making notes on some of the lighter moments along the way, and have compiled them. Sure, the election’s not over yet, but we’ve all been through so much together already, so why not get a little nostalgic? Think of this post like a Grade 9 grad ceremony in that way; also in the sense that it’s more than faintly pointless.

What crank legal theory will you be sharing with provincial election candidates who knock on your door? Mine is that Dame Moya Greene’s still-secret recommendations, no matter their content, are invalid because of the Nickle Resolution against foreign titular honours for Canadians.

Apparently if the Liberals are elected, 2022 is gonna be “Come Home Year” for the province as a whole. A few thoughts:

There’s a COVID outbreak in town. Maybe even community spread? Have been pursuing various gossip sources to piece together Who Is To Blame but I suppose there’s no point doing defamation online, no matter how mad I am about the declining likelihood of my birthday ski trip.

The election’s still on. No Chief Officer, whether Medical or Electoral, wants to acknowledge whether or not they have the power to change that. It really does appear like the thinking went as far as “cases are low here, we’ll have an election, it’ll be fine, there’ll be no cases throughout, and it’ll be fine” and no contingency plans beyond that came to fruition.

Apparently the people who are in isolation with COVID are going to be allowed to vote on Saturday by car. Not sure how that resolves the issue of them not being supposed to leave their homes, but hey.

Simon Pope messaged me that he’s “constructing a crank legal theory where instead of taking the road test, I try to drive-through vote without a license, and then launch a Charter challenge for my right to vote (drive).” You can see why I’m constantly trying to cyberbully him into unlocking his Twitter account.

Apparently the COVID outbreak here is dominated by the UK B117 variant. We’re back at Alert Level 5 (looks like they are allowed to go back up after all?). The Chief Electoral Officer isn’t at the press conference and the premier and CMOH are refusing to answer anything about tomorrow’s election.

To mangle that Lenin quote about decades and weeks, when it comes to February in NL, I guess there are snowstorms where martial law doesn’t happen, and there are election periods where elections don’t happen.

The government says we should “be kind and hold fast.” What are we, pre-schoolers on a stroll, being reminded not to squabble or let go of the leash thingy?

(For the purpose of the following paragraph I’m Bruce Chaulk, the Chief Electoral Officer, being interviewed by a CBC reporter today.) When I’m asked if I’m expecting vote-by-mail registration figures that will make it even possible for voter turnout to match that of 2019, I indicate that’s not my problem. After all, if the electorate cared about voting, they really should’ve registered to vote by mail weeks ago, before the B117 variant arrived in town. And when I’m asked why my organization appears to have been unprepared for the current situation? Well, who could’ve possibly foreseen this B117 situation? NL has had hardly any COVID cases for months!

(I’m me again now.) In respect of the above, Bruce Chaulk reminds me of nothing so much as my husband’s classic tweet, which Twitter’s dang horrible search function is denying me the precise wording of, where the tweet narrator sees someone whack his dick in a subway turnstile as he passes through and thinks “Haha,” then proceeds to walk through the turnstile, whack his own dick in the turnstile, and think: “This is poor design.”

I want to see the Greene report. I want to see how the titled lady will say the smallfolk have gotten above our station or whatever.

I’ve never really understood why this report exercise is happening, given the government commissioned a report on awfully similar subject matter (the province’s economic future) from McKinsey extremely recently. Sure, McKinsey is evil—but the gambit of outsourcing intrinsically political questions to consultants twice inside of three years really does interest me. Bold move!

The top two news items to share with Nick on the post-work stroll today were:

Here’s my idea explaining the personal trip to Crosbie’s house: Chaulk was hoping Justice Hoegg would be at home, and he’d then get to say to her “this whole election has been very legal and very cool, right?” on the theory that any response, no matter how bewildered, would then amount to the Court of Appeal’s seal of approval for his escapades. That, or he was a big fan of the funny ad starring Crosbie’s daughter Rachel.

Brucey C. (remember the Neopets card game “Cheat” where you could play against a green penguin named Brucey B.?) just changed the voting deadline again—the rule was “postmarked by March 12” till today, now it’s “Elections NL must receive it by March 25.” Alrighty then!

I don’t really think anyone’s heart was in this election even when it was normal, but now that it’s been in a weird liminal space for nigh on a month? What is this, the dang USA?

Photo by visuals on Unsplash. 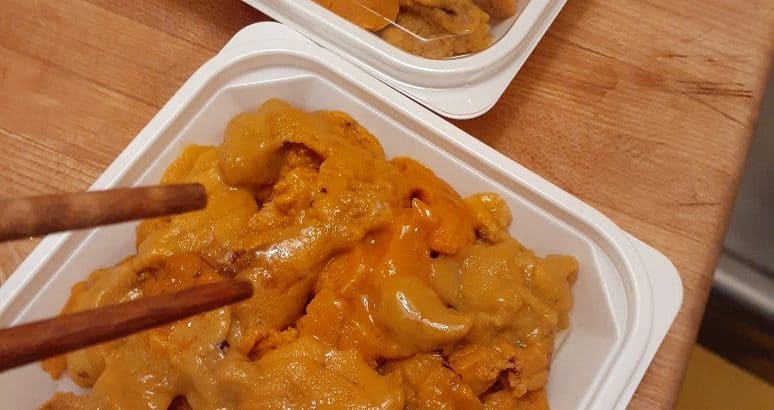 Pasta alla Ray Guy
Mr. Dumaresque spared us a couple of packages of Narita–bound sea urchin roe and we took them to the Indy Eats Test Kitchen for analysis…

So Moved, St. John’s: March Municipal Megapost
We're rolling coverage from the March 10th Committee of the Whole meeting, and the last two Council meetings, into one grand piece to keep you…