The killer BMW from Ontario shows up in St. John’s. And my husband is on it.

It’s been three weeks since my wipeout on a BMW motorcycle during a ladies-only test ride in Ontario.

My shoulder is healing from the tendon that dislocated from the bone. Slowly. The cracked rib is mending nicely too. Apparently bones that heal tend to lump up in the process. I have a horn sticking out on my chest.

So, I’m past the humiliation of dumping a motorcycle. Apparently it’s a common occurrence except if you’re my buddy of 27 years who has NEVER dumped her bike. She told me to tell you she has always driven a big motorcycle and it’s my inexperience that got me down.

About a month after BB booked me on the  ladies only BMW motorcycle test ride in Ontario, a local BMW dealership opened on Topsail Road.

Test rides were available and he signed both of us up.

“You’ll have twice as much fun,” he laughed.

He had no idea he’d be going by himself.

So, about two weeks after the accident, I’m standing in the rain on Topsail Road at The Toy Box. BB was giddy. A sea of BMW motorcycles surrounded him in all shapes and colors.

The weather was predictably miserable. Cold, windy and rainy, a crowd gathered around the registration table. As we made our way over to the table, I looked up.

Standing off to the side was “Pete,” the kind hearted gentleman who so graciously brought me back to the group after my wipeout in Ontario. I looked at him and smiled. “Hey, how are you?” He remembered me. Not surprising. I was the chick who dumped his employer’s bike.

Pete resembles the Russian dude in Rocky IV, just slightly older. It was hard not to stare.

“How’s your shoulder?” he asked.

After filling him in, I explained I wasn’t going on the run but BB would be.

While BB was registering, I turned around to face the chrome and colour of the loveliest machines I have ever seen.

Red. Yellow. Blue. With a scrape.

Blue with a scrape?

Wait a sec. Blue with a scrape was the bike I dumped. The F650 GS that I wiped out on in Orangeville sat to the side, scraped and gassed up. Ready to roll right there on Topsail Road.

“You’re not going on that thing?” I asked him, or kinda told him.

“You’re darn right I am,” he said. I noted his tone. It was defiant.

“But that’s the bike I wiped out on.”

“Really?” and he sauntered over to it. Then he took his sunglasses off to get a better look at The Scrape.

“Yes. Maybe you shouldn’t drive it.”

“Even if I don’t want you to?” Yes, I pleaded. Pathetically too.

“That’s all the more reason to go,” he laughed.

My business/life partner just lost his marbles. I knew the bike was too big, for me. BB is a short arse, as I have stated in the past. But his arms are ape long. And he had years of experience on me.

I won’t get into the foolish grin on his face when he finally hopped on the back the blue BMW with a scrape and took off with the group as part of the organized run. Or, how, when he got back an hour later, he was ecstatic.

“So, how did you find the ride?” He was in one piece and not arriving on the back of Pete’s bike.

“It was fantastic! I’m in love again. Can we give the kids away and buy these bikes instead?”

Of course I said no.

“I don’t know why you had such a problem with it. I was fine.” 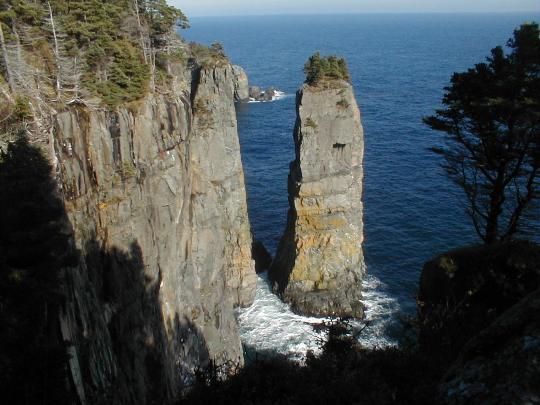 Trail blazing
Up to speed on the East Coast Trail