Any number of  critics have noted how a poem, play, or novel appears to shift, to evolve, to grow with a reader. The change can feel quite dramatic in some cases, so much so that even a delicate haiku—all seventeen gossamer syllables—appears to become something quite different. You read it when you were thirty, and childless; now in your thirty-third year, your infant daughter has appeared. You have changed—not the three lines—but the profound change can make it feel like you are reading a new poem.

This evolution of interpretation becomes even more intriguing when applied to entire cultures, rather than individuals. After the nuclear annihilation of Hiroshima and Nagasaki, after the fire-bombing of Dresden, after the My Lai massacre, the stirring patriotic speeches of Henry Vread a little differently, perhaps. Or take an example from pop culture: my entire generation has had to learn to reread the classic teen rom-com Say Anything. A greater awareness of the gender dynamics of stalking and sexual consent transformed John Cusack’s archetypal nice-guy romantic hero Lloyd Dobler: the iconic stereo scenefeels increasingly creepy in a post-#MeToo world.

Robert Frost’s “Mending Wall” remains a personal favourite, one that I have returned to again and again, a poem that has grown with me. In 1914 Robert Frost first published these lines in his second collection of poetry:

Before I built a wall I’d ask to know
What I was walling in or walling out,
And to whom I was like to give offense,

Something there is that doesn’t love a wall,
That wants it down.

Forty-six lines of unrhymed iambic-pentameter, a dramatic monologue in the voice of a New England farmer helping another New England farmer to complete the spring ritual of repairing a stone fence that marks the borders of their two properties: the quiet poem not only has withstood  twenty years’ worth of rereading, it has accomplished the even more difficult feat of remaining interesting to me after I have taught it, over and over again, to various introductory poetry classes in the U.S. and Canada.

The poem hit me hard again during the 2016 American election, especially as that election came hard on the heels of the Brexit vote. The poem slammed into me again when the new American administration tried to put in place its ‘Muslim ban’ during the early months of 2017. The poem kept hitting me so hard over the past two years that it came to feel a bit like one of the stones in the fictional fence itself: a smooth, hard piece of primordial geology cast at my head and other tender parts of my body. Listening to Frost read it in the scratchy recording I played for my class felt more and more dreary: a depressing Cassandra with a New England accent simply would go on, even when being ignored, even as his most obvious warnings came true.

On a literal level, the poem is about a wall or a fence, and how two men react to that wall.  Of course the wall’s a metaphor, isn’t it? And because metaphors spread meanings the way a dried dandelion spreads spores on the wind, we can say that the poem’s wall might bring to mind pernicious subservience—blind obedience, really—to the dictates and bigotries of our parents. It’s Frost’s neighbor who is keen to maintain his father’s fence in this poem; he feels safe behind the enclosure of a cliché, the one he inherited from his father, the bit of verbal frippery he clings to for warmth and security: “Good Fences Make Good Neighbors.” The neighbor repeats this phrase like a mantra, or perhaps a bit like an election slogan, one of those phrases that the devoted find takes on some fetishistic magic through chanting repetition, even as those outside the cult merely hear meaningless noise.

After 2016 a new tone appeared in those lines, something that is beginning to haunt me as the world drearily grinds on after the summer and fall of 2016: Frost’s wall doesn’t just keep people apart for those nonsensical, non-reasons that we often label ‘tradition’ and ‘patriotism.’ When we build a wall—the poem now implies—the wall changes us. And as we change, the wall itself changes. We enter into an evolving, symbiotic relationship with the wall we built, a relationship that we may eventually have little or no control over.

Consider: any wall might feel like shelter until comes the day that the wall becomes a prison. A young girl shelters behind the strong arm of her father; enough birthdays pass, and the strong arm of the protective father now suffocates the woman, ready to determine her own fate, make her own decisions, become the self-determining adult most of us desire to be. If that transition never happens, or is even delayed, both the parent and the child become warped by their static roles. The patriarch’s ‘protection’ becomes the violent arm of the oppressor all too quickly.

Across the world, populist nationalists have stoked the fear of the refugee, the immigrant, the racial other, those who practice a different faith, in order to gain power and consolidate wealth. The Brexit crowd wooed your crazy racist uncle in the U.K., the one convinced that that many people speaking Polish down at the local grocery couldn’t be up to much good. Trump—with the tacit approval of the increasingly unhinged Republican Party—made Mexicansand Muslims his patsies, and managed to dig up enough fragile white Americans paranoid about burqas and sharia law and white purity and the Mexicans harvesting strawberries and busing tables to boost him into an office that never would have been his without the ignorance he himself ignited into hatred. Canada’s PC party looks for these electoral gains by cribbing from the same playbook. Kelly Leitch’s ‘Canadian values’ hotline may have failed (so far), but Doug Ford found ways to not so subtly dog-whistle the same basic ideas through the candidacy of Tanya Granic Allen; now Ford is the premier of Canada’s largest economy.

And walls and fences and borders are central to these strategies. Trump wants to build a literal wall (one that, sadly, already more or less existedbefore his candidacy even gained momentum). Brexiters want a hard border between them and the continent, even as that border threatens their food supply chain, and damn the consequences for that most delicate peace in Northern Ireland, a tortured place desperate to tear literaland figurative walls down for decades, if not centuries. Even before the current mess Stephen Harper wanted to ‘strengthen’ the Canadian border by not just keeping track of who came in, but also tracking who left. Australia—apparently utterly blind to historical irony—is running island prison campsin order to make sure that refugees never contaminate the borders of a country built by transported convicts. Even now an Australian Senator calls for a ‘final solution’ to the ‘problem’of refugees. Conceding to PC pressure on the right, the Liberal government of Canada has been quietly decreasing the number of refugeesit permits to find refuge in its borders.

Everywhere, it would seem, the xenophobes are winning. The walls go up. The borders get harder. The searches at the airport and other border check points become increasingly invasive. A French teenager goes for a summer jogon a Canadian beach and finds herself detained for two weeks by U.S. Border guards intoxicated by a nationalist frenzy.

Do we feel protected behind these walls? Perhaps, for a few moments. But our leadership knows that the people’s fear granted them their tenuous power, so fear must be maintained.

Expect to be told about fresh, urgent threats tomorrow.

Like Frost, the late novelist Ursula Le Guin also observed the behaviour of walls and barriers, and understood something of the unpredictable ways in which they might be repurposed. She opens her novel The Dispossessed with a meditation on the ways in which walls inevitably betray their builders:

Like all walls it was ambiguous, two faced. What was inside it and
what was outside it depended on which side of it you were on.

Here we come to something I find increasingly disturbing: those who are building a wall today, or maintaining a ‘strong border’ may find that there will come a time when they too, wish to escape, or leave, or simply go somewhere else to breath fresh air. They, or their children, may look at the walls they constructed with new eyes, and wonder if the wall continues to provide ‘freedom,’ or if it now casts the shadow of prison bars on a now inaccessible world. With luck, Canada may still be in a position to decide whether it really wants these walls or not; the time to pay attention and make these decisions is now.

In the meantime, the walls we, as a planet, are building—whether literal or figurative—will continue to shape, perhaps distort, the people building them. When you draw border, when you build a wall, when you define an us and a them, when you scratch a line in the sand, you will feel compelled to defend that line. You become the person who built the wall, and now your identity depends on the defense of that distinction.

Some distinctions, no doubt, are worth making: the world managed to draw a necessary line against fascism in the 1930s and 1940s, a line, sadly, that may need a touch-up or two. That line was drawn against a toxic political philosophy, one undergirded by devout faith in the non-existent biological concept of ‘race’ and further supported by religious paranoia. That pernicious blend of pseudo-science and mystical faith in one’s relationship to a particular bit of soil took millions of civilians to mass graves. Today’s leaders want to draw distinctions between people, not against a destructive method of governance. They’ve rediscovered the wicked but trusted recipe for political power: carving up demographics and pitting them against one another has won elections and preserved dynasties and consolidated economic power in the hands of the few for millennia.

We often look back on the walls built throughout history with a bit of bafflement, a touch of pity, and perhaps more than a little contempt. A wall built in Berlin in 1961 was once an object of mystery, intrigue, and terror; it was the daylight manifestation of my cold war childhood’s nightmares.

Almost overnight—or so it felt one autumn in my adolescence—that wall became an object of derision. A distinction I learned to take for granted during my childhood, between ‘East Germans’ and ‘West Germans,’ now feels odd on the tongue, strange to see in print. It’s difficult to convey to students coming through my classes how quickly that new perspective came: yesterday’s monster was tomorrow’s laughingstock.

Now chunks of that blood-stained slab of cement decay in museums, or are displayed as warnings against barbarism.

Nathan Elliott spent his childhood in Idaho, his university years in the greater Chicagoland area; after working in Georgia and Newfoundland, he is currently living and working in Montreal. He has published peer-reviewed research on the intersections between nineteenth-century science and Romantic and Victorian literature; he has published fiction and creative non-fiction in a variety of venues; the Newfoundland and Labrador Arts Council awarded him the 2016 Lawrence Jackson Writers’ Award. 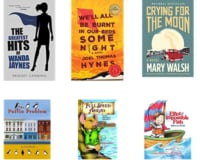