“My fear is that women and girls experiencing violence in their lives and relationships may feel let down, leading to uncertainty about coming forward.”

My name is Debbie Hibbs and I am the mother of Juliane Hibbs, who was murdered along with her fiancé Vincent Dillon on October 15, 2013. This happened at the Villa Nova Plaza Medical Clinic in Conception Bay South.

I am writing in response to the story of October 11, 2019 in the Independent called, “Don’t Cross Newfoundland and Labrador’s Thick Blue Line.” I was mentioned in this story, which is an investigative report on possible collusion between public servants working in the government of Newfoundland and Labrador, the RNC, and others. The purpose of this collusion appears to be pressuring the then-Executive Director of the SJSWC, Jenny Wright, from her position. (Jenny`s “divisiveness“ being cited as the reason for this.)

In the fall of 2017 at the ‘In Her Name Vigil,’ Jenny called for action by government to combat the growing violence toward young girls and women. She said a Task Force is what was needed. This is a call to action that I supported at the time and still do. The SJSWC and other groups deal with women and girls suffering abuse and violence in their lives every day. I think they have a better knowledge of what is needed to be done to combat this!

My daughter was in an abusive relationship for 15 years before she was murdered by her former partner. All our cries for help fell on deaf ears and we were basically written off as distraught parents of a rebellious teenager. NOTHING could have been further from the truth!

So, a call to action for a Government Task Force was the right thing to do!

In response to this, government offered a Committee which was brought together in the fall of 2017. Advocacy organizations, police, and certain individuals were invited to the Committee table.

I have to tell you that at NO time was I ever invited to the Committee Table, except in early 2019, a time after which the gears around Jenny Wright were already turning.

This was all unknown to me at the time and did not influence my speech at the Purple Ribbon Flag raising event.

I am not an activist, but such were the circumstances imposed upon me and my family.

I believe in free speech and expression, which is our constitutional right! I was only advocating for what I believe is the best way forward. I am not interested in the politics surrounding this, and the infighting that comes with it. That certainly does not honour my daughter or any of the murdered and missing women and girls, or indeed those experiencing abuse and violence in their daily lives right now.

Five years ago I advocated to government about using the courtesy flag pole at Confederation Building for a ‘Purple Ribbon Flag’ ceremony to raise awareness to all the missing and murdered women and girls in this province. My daughter, Juliane, is among them.

My speeches have only advocated for greater awareness, ideas that I believe could make a difference in the mindset of individuals caught up in the perils of domestic abuse and violence. This year, November 25, 2019 will be the 4th annual Purple Ribbon Flag Raising event!

In the story published October 11, 2019 it was suggested by certain people that I used the Purple Ribbon Flag Event to forcefully criticise government, that my speech was an attempt (or as they said “a missed attempt”) to rally the masses in favour of a Task Force. The most undermining comment though is that I was influenced, and maybe told what to say in my speech. I can only assume that the “outside influence” they are suggesting is Jenny Wright! Nothing could be so wrong and further from the truth. I am not a polished public speaker, but whether my speeches are good or bad they are always crafted and written by ME!

These people who suggest otherwise are the divisive ones, NOT Jenny Wright!

I would never maliciously criticize our government or any organization that is out there trying to advance the public good! For such a senior officer of the RNC to suggest otherwise is in itself very divisive!

My fear is that women and girls experiencing violence in their lives and relationships may feel let down and untrusting by this possible collusion, which may lead to uncertainty about coming forward. The obvious divisiveness and dislike among certain members of the advocacy groups, including policing, and the lengths at which they feel they can go in order to hurt and defame someone is very disturbing and frightening.

“What is a Story For?”: Michelle Porter, Journalist-Poet
Michelle Porter talks with the Indy about her debut book of poems, writing with purpose, journalism's place in her poetry, & her favourite Métis literature. 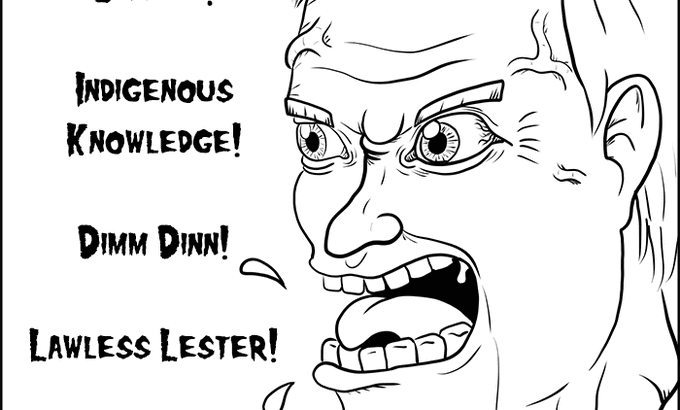