Time to slay the Muskrat Monster

“I love the fact that folks are speaking out about our lost services and our financial state, but I do feel we cannot call ourselves a compassionate people if we are not willing to stand up against Muskrat Falls.”

I love the fact that so many are standing against our corrupt government these days.

Yes, corrupt. No one will ever make me believe that those folks, with all the information they had and I assume some of the greatest minds in the province behind them, did not know how much Muskrat Fall would cost us on so many fronts.

Successful business folks such as Cathy Bennett and Dwight Ball, who have made millions before entering politics, recently became some of the worst financial failures our province has ever seen. I love the fact that folks are finally seeing through the B.S. and speaking out.

It saddens me though to see what it took to awaken us: severe blows to health care, education, transportation, and tax and fee hikes that many of us can’t afford. What I don’t get is the fact that we are still looking past the disastrous Muskrat Falls project. We are spending our future away on a corporate make-work project that anyone with half a brain would have known could never make sense.

Yes, I love the fact that folks are speaking out about our lost services and our financial state, but I do feel we cannot call ourselves a compassionate people if we are not willing to stand up against Muskrat Falls. World-renowned experts have said the North Spur is bound to fail, which puts lives downstream from the dam at risk. If people aren’t injured or killed in suddenly in the event of a dam breach, they may be poisoned slowly by the methyl mercury contamination Harvard scientists have said will rise to unsafe levels for consumption, taking away a traditional food source for Innu and Inuit in the Lake Melville area.

And much of our beautiful wilderness, the very thing that ensured our survival here, has already been lost — but more will be destroyed once the reservoir is flooded. What of the animals? What about the Gannet Islands Ecological Reserve at the mouth of Lake Melville? According to the Department of Environment and Conservation, the reserve protects the largest razorbill colony in North America and the third-largest Atlantic puffin breeding colony in North America. “The Gannet Islands also hosts 36,000 breeding pairs of common murres and 1,900 breeding pairs of thick-billed murres, and scores of black-legged kittiwakes, great black-backed gulls, and northern fulmars,” the government proclaims on its website. “During the summer, the islands are also a staging area for harlequin ducks preparing for their southern migration.”

Yes, I do appreciate those who stand up, but I would really appreciate if we would go for the jugular and tear the head off the beast – the Muskrat Monster – that had brought us to this insane place. 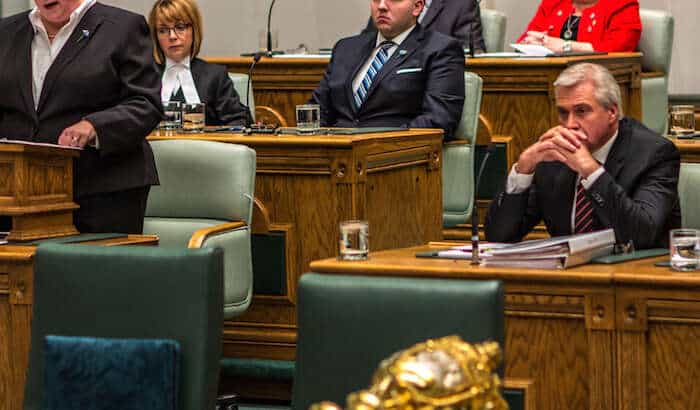 Peer loyalties in Budget 2016
It might sound too simple or gauche, but is it possible the personal wealth of Dwight Ball and Cathy Bennett might actually lie at the…

The Liberals’ new Independent Patronage Commission
An independent appointments commission, as it's currently proposed, will do more to mask existing problems than actually solve them.