What I learned from attending a #BlackLivesMatter protest in Toronto

“It was a true sign of solidarity against systemic racism.”

Last weekend I attended the Racialised and Indigenous Student Experience Summit, where over 200 racialised and Indigenous students gathered in Scarborough – on the traditional territory of the Mississaugas of the New Credit First Nation –  to discuss the effects of colonialism and come together to find a common plan to fight racism. The summit was one of the most powerful and inspiring experiences I have had in quite some time; there were so many amazing speakers, panels and workshops.

On the Sunday of the summit, we were made aware that there would be a Black Lives Matter protest taking place in front of the Toronto City Hall. The organizers of the summit provided those who wanted to attend with bus tokens and divided us up into groups so that each group had a Torontonian to direct us on the subway. I was a little torn when deciding — I would have to miss the afternoon and evening of workshops and panels, but attending a protest like this wasn’t an opportunity I would have in N.L. The Black Lives Matter movement is something I support largely, and this was an opportunity for me to do something more than ‘clicktivism’ to show that.

Before going to the protest we were told there would be police presence. We were told not to take any identification with us and to write a Canadian Federation of Students contact number and our emergency contact number on our person in case our phone died or was taken from us. We were told that if we needed a lawyer to contact the summit organizers and they would help us out. I quickly realized this warning wasn’t as much for me as it was for the students of colour at the summit. I am Indigenous but visibly white – not a target of racial profiling.

Our groups arrived at City Hall before the protest started, and so did the police presence. While organizers were setting up there were four visibly white, male officers in the distance watching; people were making posters, passing around samosas, taking photos and chatting amongst themselves. The officers left and I thought we wouldn’t see them anymore until a group of 10 or more arrived on bicycles and stood in the far corner and watched us pray, cheer, sing, dance and demand justice. The protest opened with Indigenous drummers and singers welcoming us onto their traditional land; it was a true sign of solidarity against systemic racism.

Unfortunately we could only be at the protest for a few hours before we had to return to the hotel and conference, but I am so glad that I was able to be there, even it was just briefly. My heart truly goes out to the black lives affected by racial profiling; I cannot imagine and will never experience the fear and injustices that they do. But, by being there I was able to see how much their lives are directly affected by this; it showed me how much systemic racism is a problem and opened me up to a side of it that I have never seen before. I can only hope that in my lifetime the need for these protests and organizations will disappear, and I’ll be sure to fight my hardest to help make sure it does. 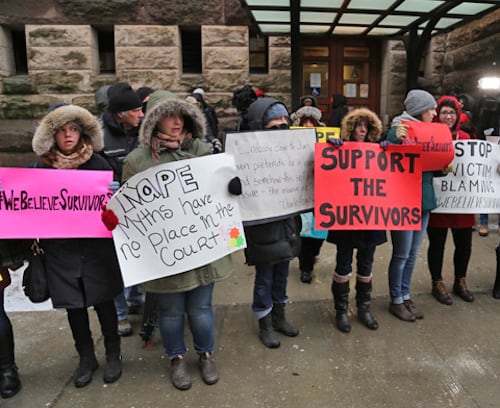 Canada’s legal system is sexist and broken
The Ghomeshi ruling is just the tip of the iceberg. 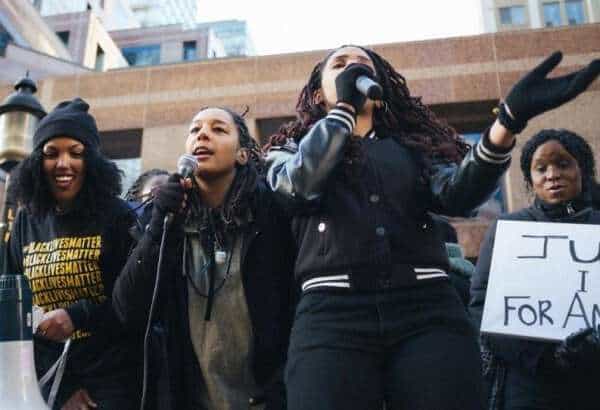 Black Lives Matter demonstrations in Toronto gaining momentum
Organizers say members of the Black community and their allies will continue to demand an end to anti-Black racism and police brutality.