The joys and tribulations of breastfeeding

I always knew that I would breastfeed my little one.

It wasn’t a question for me. I had previously worked as a doula – one who assists, supports, and provides service during childbirth – and I firmly believed that breastfeeding would be the right choice for me and for my little person. Thanks to my doula experience, I didn’t romanticize breastfeeding. I knew it would likely be difficult, that I would be lucky if it were easy, and that chances were good that I would need a lot of support.

And we did. We had our problems, and we got support as we needed it. But my little guy – he’s a trooper. And he loves his milk. At 14 months we are still breastfeeding with gusto, and hope to continue for a long time. Besides the nutritional benefits of breastfeeding, the advantages it brings to our relationship have been wonderful. Some of my favourite moments are simply snuggling with my little person, knowing that for a portion of his life, his nutritional needs have been fulfilled by me, his momma.

And yes, he is a milk baby. Now a happy toddler, he is still breastfeeding as if he is starved half the time, and we are constantly redeveloping our breastfeeding relationship. He climbs on me, he grabs me down my shirt, he pulls my shirt out to put his entire head inside it to peer in, as if making sure that his source of milk is still there. And yes, he also eats. Breastfeeding a toddler who also eats can get messy. He jams sweet potato fries or tofu in his mouth and then grabs the nipple, pulling it towards him. He wants to wash his food down with milk. Yes, he drinks water, but milk is still his favourite. And, occasionally, I can see him wondering if he can get food from my breasts – such as the time he jabbed my breast with a fork immediately after feeding, instead of jabbing his plate with the fork. Ouch.

With a breastfeeding toddler, one loses all discretion and privacy. Those who suggest that I try to be discrete or to cover up, or to not let it “all hang out”, haven’t been around a breastfeeding toddler. It’s not up to me, it’s up to him. He wants what he wants. And he’s entitled to have his breakfast, lunch, supper, or snacks as he needs them. He can feed in a restaurant, in a shopping mall, in Starbucks, or at Bannerman Loop (which, yes, we managed shortly after it opened, unzipping my jacket in -14 weather). As adults, we’re allowed to eat pretty much anywhere, so there was never any question in my mind that I would feed him anywhere. If my baby was hungry, then I would feed him.

My first time breastfeeding in public happened in Toys “R” Us. Not knowing how the staff or customers would respond, I did ask if they had a breastfeeding room. Rather, they guided me to an oversized recliner in the middle of the babies section, complete with a footstool. It was breastfeeding at its comfiest, my little one only three weeks old at the time. It was also breastfeeding at its most public, as we were surrounded by customers – including one that vacated the chair they were trying out to buy so we could use it. I was officially initiated into public feedings.

Since then, we have publicly breastfed nearly everywhere. We have fed on a Walmart couch, in Winners, on airplanes, on the beach, in coffee shops, in parks, on street corner benches, in hotel lobbies. At times I have wondered whether someone would question me, or make a comment, but we have almost always received no comment at all, or an occasional a “good for you!”

And then most recently, in California of all places, we were questioned about our choice to publicly breastfeed. At this stage in toddlerhood, I couldn’t prevent my babe from breastfeeding if I wanted to. And if I did, I’d feel like the worst mom ever – denying my little person his nutritional needs when he is hungry. Worst. Mom. Ever. So yes, we breastfeed on demand. And on a train to Los Angeles, a staff person approached us as we were breastfeeding in the observation car.

“I see it’s lunchtime! Perhaps you’d both be more comfortable in a lower level car with a bit of privacy?”

I could feel my face grow flush, as I suddenly felt shocked, embarrassed, and filled with disbelief. I quickly answered her, “No we’re great here. He feeds all day long so we’d rather not be stuck off in a private space all day.”

She left quickly, saying that was all she needed to hear. The whole encounter was less than a minute, and I almost wondered if she actually was offering me privacy because she thought I might want it. But my partner also raised his eyes at her as she spoke, and I wondered in all those seconds whether someone had complained. Were they shocked to see us feeding? Did they think it was inappropriate?

I was aghast; California is a great state where there is actually a law that protects the right to breastfeed in public, and prevents interference with a breastfeeding mother. In that moment she had awoken my almost-sleeping toddler from a much-needed nap, and broke our happy cozy moment of bliss together. We were disturbed, and it was so unnecessary.

I am so thankful for the massive amount of breastfeeding support that we’ve received as my little one has grown. We have had a mostly uneventful, happy breastfeeding relationship. But many who want or choose to breastfeed do not have such support, including from family members or friends who understand their desire to breastfeed. They often feel embarrassed, even ashamed, at the simple act of feeding their babies.

That’s all we’re doing: feeding our babies. So simple, yet so charged with turmoil, politics, and discomfort at times. And it doesn’t need to be. It’s a basic right to have food, and it’s no one’s right to question how we do it.

Breastfeeding has been absolutely best for me and for my little one. We’ve traveled, we’ve played, we’ve enjoyed other foods, and we have a beautiful, nurturing relationship in part thanks to the closeness that we’ve developed through breastfeeding. I’m in no rush to end that relationship, and I’ll be incredibly sad the day that we ultimately stop breastfeeding. So, in the meantime, I’ll breastfeed where he wants, when he wants, and let him decide how and when he wants to stop.

It’s what works for us, and it’s the right of no one else to question or judge. 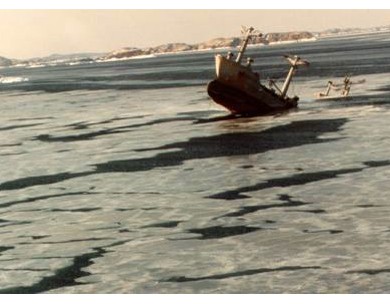 Why the petroleum must be removed from the Manolis L
The 500 tons of oil in the sunken ship in Notre Dame Bay is a disaster waiting to happen, and one the Canadian government has…