We use what we generate

Electric heating is old technology that’s bad for us and the environment. If we want to become energy secure, we must first appreciate there’s more to heat and energy than flicking a switch or plugging in

It takes storms of momentous proportions to challenge the engineering and technological feats of our modern age but Nature can sure serve up some nasty stuff here in the northwest Atlantic. This recent storm rivaled my memories of the winter storm that sank the Ocean Ranger. We live in the ‘age of convenience’, and nothing is taken more for granted than the availability and use of electricity. In our homes and offices, we just plug-in and press start without any real concept of how much energy this device needs or where the electricity is coming from. In some respects, it is amazing that we haven’t suffered from larger scale or more frequent black-outs when you consider all those wires strung between all those utility poles across the vast weather-swept landscape of Newfoundland and Labrador. An ice storm in the early 1990s played total havoc on the grid. An aging grid and more frequent extreme weather events point to more troubles to come.

Wind and micro-hydro in NL are possible

Here at the Tree Of Life Sustainability Project Inc. in Salmonier, St. Mary’s Bay we generate our own electricity through micro-hydro (note as distinct from ‘mini-hydro’) and/or a wind turbine. It was a personal choice to do so, and it has been a challenging road to build knowledge and handyman skills in order to generate electricity. It has been even more educational to come to understand how to use this energy efficiently. Either system can produce about 1,000 watts during peak performance. Another way of putting this is that at 1,000 watts of output we are working with 24 kilowatt hours (kwh), and an average householder on the grid is using about 36 kwh.

Electrical output is more variable when using wind than water; you become very aware and how often, especially in the evenings, that the wind is calm. Nevertheless, Newfoundland is a windy place and a wind turbine is an excellent approach to alternative energy here. Micro-hydro, on the other hand, is a very steady-state system, and although less touted for alternative energy in the media, has a huge potential in our surface-water-enriched province.

There is a chap named Paul Cunningham in Sussex, N.B. who has been manufacturing beltless micro-turbines for decades and selling them all over the world, and his manuals on how to set-up a gravity-based system are excellent.

In 2011, we hosted a five-day workshop lead by Ernest Thompson (Woody) of Fundy Solar on how to build your own wind turbine from scratch; from carving the blades to winding the wire and placing the rare earth magnets on the rotor adapted from an automobile hub.

The workshop is directly out of the ‘Wind Turbine Recipe Book’ cooked by Hugh Piggott from Scotland, who travels the world giving these workshops. Not only do you get to know every part in the assembly but you also end up with a turbine that lasts (and believe me, our 10-foot diameter turbine on a 60-foot tower made from three-inch metal pipe has taken a lot of blasting winds recently, and turned them into watts). A 245 ft. tech cable delivers the charge to cordwood power shed below. The nice thing about building yourself it is also allows for some artistic expression like the raven I carved for the tail that orients the turbine blades into the wind, much the same as a weather vane.

One of the first lessons in off-the-grid energy is that turning electricity into heat is grossly wasteful. It takes a relatively large load just to generate a seemingly small amount of heat. When I realize that all the new house construction, and much retrofitted older homes here in the Avalon area are heated by electricity, I recognize that much of the “demand” is driven by this factor alone, not to mention the pervasive use of electric stoves and hot-water boilers. So enter an extreme winter storm and everyone is trying to stay warm, and heaters are on max and the system overloads. Here at the TOL, just one baseboard heater (1,500W) would drain all the capacity of either the wind turbine or the micro-hydro.

The lesson is this: Forget about electric heat if you want alternative energy or are seeking to be energy efficient. From a provincial standpoint, we need to be asking our politicians to support alternatives to electric heat, and stop using this escalating “demand” to justify the need for more supply. We actually have lots of electricity generated in Newfoundland and Labrador if it were confined to more efficient uses (than electric heat). Perhaps it’s time for tax incentives and grants to help shift toward geothermal energy for heating. In this system, liquid runs through pipes located 6 to 7 feet sunk into the earth and draws warmth from the constant temperature there (about 580F or 100C). The heated liquid is piped into an indoor unit (‘the heat exchanger’) and circulated through the house. In provinces such as Ontario the government supports and subsidizes private alternative energy generation by purchasing it back onto the grid at a rate substantially higher than the cost to consumers. Newfoundland is still in the dark ages on this type of progressive approach!

…and so is our urban planning

In urban areas when we start to open up to concepts of alternative energy, we quickly hit a wall because building lot sizes, codes and bylaws foreclose most opportunities. The lot sizes in the current suburban sprawl radiating-out in the Avalon area and low costs to install electric heat ensure maximal profits to developers while often eliminating potential for geothermal heat installations that in theory could be run (that is, the heat exchanger) by alternatively generated electricity. Wind turbines require space (that is, guy wires to support towers) and have a certain amount of noise that some may find annoying. From my experience here in the Avalon area, we can largely forget about getting much return on investing in solar energy because when we need the electricity most, we get it least.

There are many deceptions on the path to alternative energy, and one of them is that we must be able to amortize our investment against what we would otherwise have been spending when fully on the grid. Joe Dominquez and Vicki Robin in their 1999 classic book Your Money Or Your Life describe how the lives (“life energy”) of most people in the western culture are subsumed in careers. If we take the time to calculate the amount of money that we have earned in our lives versus what we presently have to show for it, we are shocked. It is important to understand that investing today in those things, such as alternative energy, that truly provide a return in the future are the best investments that we can make because otherwise this money fizzles away into other nebulous things. For example, a wind turbine pays back every day, every month, every year because not only is there less money going out on paying for energy but also less need for monthly income to pay utility bills, and this frees up our life energy.

A cold reminder, a hot opportunity

Megaprojects to produce energy carry big environmental costs, and, as we are seeing with Muskrat Falls, huge financial burdens on today’s taxpayers. There is much more to the supply of and demand for electricity than forecasting into the future the present day inefficient and wasteful uses of this precious energy. But this is what is happening, and one is left to wonder how anything can ever change if for the average individual the relationship to electricity starts and stops at the plug, and another crippling monthly utility bill.

One is left to wonder how anything can ever change if for the average individual the relationship to electricity starts and stops at the plug, and another crippling monthly utility bill.                  – Ian Goudie

Enter blackout 2014, and suddenly a major crisis is palpable because we become painfully aware of how almost everything is now run by electricity, and more specifically, as individuals on the grid, we do not have any means to mitigate a pending doom. One can only wrap up in blankets for so long in a house without heat in sub-zero temperatures. To go off-the-grid is not any easy task, and in fact pretty much impossible for most urban dwellers. Nevertheless, there are many means to improve energy use, and the biggest one starts with heat.

Those lucky individuals with woodstoves during blackout 2014, knew that they had invested in the right thing! I have yet to encounter homeowners with geothermal heating who have been anything but amazed with its performance. After all, it’s free energy from Mother Earth herself. There’s more to heat and energy than turning on a switch or plugging in. We live in a technologically advanced age where 99.9% of the population do not know how any of it works. Starting into alternative energy is a way to get on the bottom of the learning curve because it is wise to know what you will do when the next blackout darkens your world. 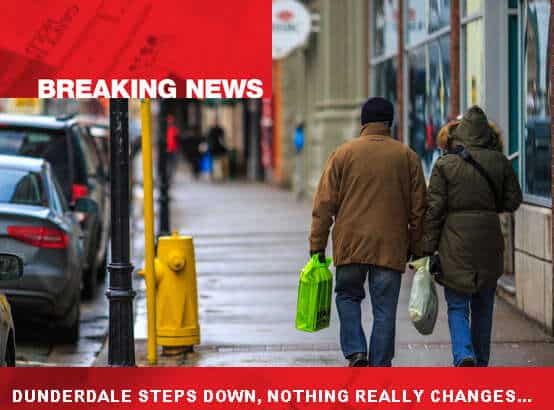 “All spectacle and no substance”
Beyond the colourful media coverage and incriminatory political punditry that have turned Kathy Dunderdale's resignation into the biggest story of the year, is that other…