Well, there it was. The big announcement. The big rate mitigation plan. The rescue plan to save us all from Muskrat Falls, the hydro megaproject that was sold as the province’s future and instead has morphed into the self-destruct button.

But this was supposed to be it—the big one. The one we’ve all been waiting for. And what did it turn out to be?

You guessed it. They’ve welcomed the federal Liberals to the “Let’s-plan-a-plan” Planning Club.

God help us if any of these folk ever take on a role as volunteer firefighters in their retirement. By the time they’ve planned to come up with plans to plan a response to the smoke over yonder half the cove will be burnt to a crisp.

Not a bad metaphor for what’s happening to the province, actually.

Since Premier Ball’s “big announcement”—akin to calling a gender reveal party to announce that you’ve decided to try to get pregnant—pundits, analysts, journalists, and politicians have been scouring federal Finance Minister Bill Morneau’s letter to Premier Ball with all the fervency of a church-load of bishops devouring the latest papal bull, convinced that somewhere within the obscure verbiage lies the key to salvation. What does this line mean? How about this? What’s the subtext of this paragraph? What are they really trying to tell us? How can we interpret all this garbage in such a way as to convince our flock that their salvation is assured?

What all this hullabaloo does reveal is that a very old and timeworn Newfoundland tradition is alive and well: blind faith in those richer and more powerful than you. There is no rate mitigation plan. What there is, says Premier Ball—his eyes still bedazzled from having witnessed the shining glory of Bill Morneau’s signature—is a commitment from those above us to look after us.

Hallelujah: we’re saved! We haven’t been able to sort out this mess on our own, but now the much smarter brains at the federal finance department will figure out how to save us!

It’s an old story. It was Joey Smallwood falling for tall tales about the province’s future wealth spun by the corporate cronies surrounding him, signing away our future. It was voters seeing Danny Williams—a self-made millionaire! from Newfoundland!—and blindly trusting in him to make us all millionaires too. It was ministers and deputy ministers and assistant deputy ministers all the way down the line letting themselves be lulled to sleep by lullabies about Muskrat Falls power fantasies rather than doing their due diligence in questioning the proposals now throttling the province.

It is this province’s repeated habit of putting blind faith over due diligence which constantly threatens to bring us to ruin. How, again, was the braintrust of an entire provincial bureaucracy able to put together a megaproject proposal that left the whole province so vulnerable? How was that government able to come up with an employment contract that allowed former CEO Ed Martin to jump ship with millions in his severance loot-bag?

The fact is, this province’s elites are spellbound and live in a fantasy bubble in which nobody needs to exercise due diligence because it’s beneath them—and those who are richer or in a higher position or otherwise better than you must always be trusted at their word because they’re…them!

I remember some years ago, as a student activist, being in a meeting with a senior university administrator. We were proposing a series of amendments to a lease agreement, which was under negotiation. He briefly skimmed them, and then brushed them aside.

“What I find, you know, is that policies and rules and regulations are not always really the best way to go,” he said, with a haughty air of seniority. “You can become overly bound by rules. What’s more important is cultivating positive relationships. All we really need is trust and a positive relationship. We don’t need rules and policies. Signed rules and commitments can actually be counterproductive sometimes, you know.”

That exchange said everything about how this province is poorly governed. And the unwillingness of an astonishing number of bureaucrats and advisors to our government to question and challenge stupid ideas is also deeply troubling. Is it fear? Greed? Aspiration to be in a position of power someday? Plain old ignorance?

No letter, no commitment, no creative mathematics will rescue us from Muskrat Falls. Short of cancelling the project and ripping up the contracts on which it is based (which is in fact not the worst option out there, to be honest), the only thing that will save us is concrete monies put into rate mitigation. Cold, hard cash. Until that money is in our coffers or clearly committed to in a straightforward documented publicly transparent manner that cannot be misinterpreted or reinterpreted down the road, there is no concrete solution at hand. And we must not put our trust—yet again—in anyone’s word that they’ll take care of it for us, in some magical way down the road that they can’t explain to us.

But it would at least be progress for us if this entire experience awakens some of our future leaders to the fact that this province urgently requires a politics based on something other than blind faith and servile bootlicking.

Meanwhile, I expect we’ll no hear no end of it from Premier Ball, telling us how gorgeous Emperor Bill Morneau’s new clothes are. 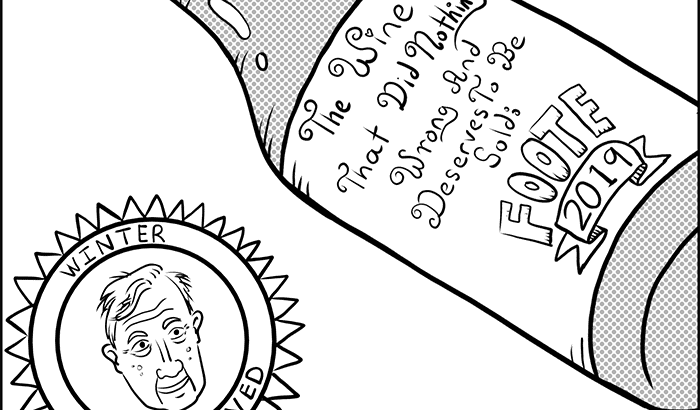 Indy Inks (14 February 2020)
"There was no business case developed and approved for the initial establishment of the Bordeaux Futures program." - AG Julia Mullaley

Reckoning With Colonial Violence in Canada
Those who assembled on Saturday in solidarity with Wet'suwet'en are among thousands taking part in ongoing blockades and demonstrations across Canada.