Da b’ys are back!

It was 1986 when the Beastie Boys first sledge-hammered their way onto the charts with their debut hiphop album Licensed to Ill, the first ever rap album to hit #1 on Billboard (they had, of course, drifted through the scene since 1979, first as a hardcore punk band and gradually shifting to their trademark hip hop genre). Now, 25 years later, they’ve unleashed their 8th full-length studio album on the world.

They continue the crusade against boredom, parents, and rules and norms of all forms and take it to even grander heights.

A lot has happened since Licensed to Ill. While retaining their trademark sound, the band has continued to develop as experimental genre-benders, delving into rap-metal, back into punk, exploring jazz and funk, and pioneering the use of sampling in hip-hop. Politically, they’ve been outspoken opponents of the US war in Iraq, waged a public campaign against Islamophobia and anti-Muslim sentiment in the US, and have campaigned actively against sexual violence. Personally, they’ve been through a lot as well: Mike D (Michael Diamond) and Ad-Rock (Adam Horovitz) are married (the latter twice), while MCA (Adam Yauch – the one who started it all) turned vegan and went off to study with the Dalai Lama, while also successfully battling cancer (a struggle which delayed the release of their latest album).

Given all this, you might be forgiven for thinking they’d mellowed, or were releasing the sort of pension-fund rehash of older material which so many 80s bands are now reuniting to do. Thankfully, nothing is farther from the truth: they continue the crusade against boredom, parents, and rules and norms of all forms and take it to even grander heights. As MCA puts it in their new lead single ‘Make Some Noise’: “I burn the competition like a flamethrower / My rhymes age like wine as I get older…”

The Hot Sauce Committee Part Two (don’t worry, they put Part One on hold to focus on Part Two, so you didn’t miss anything) comprises a total of 16 tracks (13 full-length) spanning a musical gamut that’s impressively broad, but which will have you dancing from beginning to end. There’s no repetition here: each track is unique in style, but each full of deftly crafted lyrics and with its own distinctly shaped beats. I’ve listened to it for the better part of two days and I’m still not bored. The reggae-themed tune ‘Don’t Play No Game That I Can’t Win’ features eclectic punk-pop-reggae-hiphop artist Santigold on vocals, and the trademark nasty ‘Too Many Rappers’ features, appropriately, Nas battling it out with the b’ys.

Overall, this is Beasties pure and direct, from the accurately described ‘Funky Donkey’, to the psych-out trancy instrumentals of ‘Multilateral Nuclear Disarmament’, to the slamming ‘Lee Majors Come Again’ that hearkens back to their punk roots. My faves are ‘Here’s a Little Something For Ya’ and the lead single ‘Make Some Noise’, two brilliant tracks evocative of their Hello Nasty era material.

Vinyl releases of the album have been delayed until July, but CD and digital downloads are available for purchase now. If you need a taste to convince you, the boyz have responded to a leaked pre-release of their album online by streaming the entire album on their website. “As a hostile and retaliatory measure with great hubris,” they wrote, “We are making the full explicit aka filthy dirty nasty version available for streaming on our site.”

And if you need further encouragement, check out the mind-boggling half-hour short film they released as a promo last month as well. Featuring an array of famous cameos, as well as samples of many of the songs on the album, the video quite possibly serves as the most brilliant and inspired mid-life crisis in the history of music (after rampaging through the city, crashing parties and hurling beer cans, they come face to face with their own selves who’ve time-traveled from the future. They realize to their horror that they’ve become uncool, and the only solution is to defeat their future selves before it’s too late). This delightfully offensive masterpiece is titled ‘Fight For Your Right: Revisited’ and will help to reassure you that the Beasties intend to carry on, battling parents and throwing pies, for years to come. 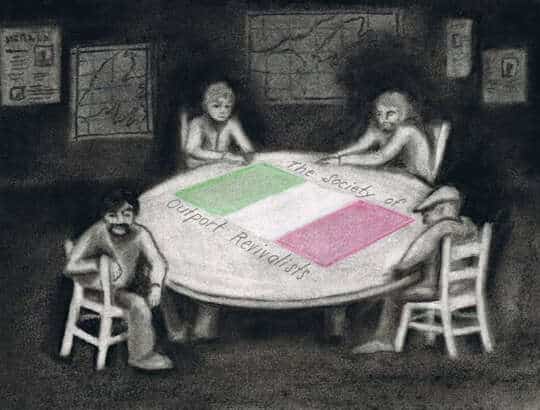 Chapter 7: Operation Bring Down Council
There was no going back now. They already had my name on the ballot.