Just Go With It

In spite of the title, you can probably just go without it

Like most people, I was a fan of Adam Sandler in the mid-90s. He was goofy and funny, and his movies were the perfect mix of low-brow humour and heart. The thing is, that was going on twenty years ago, and since then he’s just been agonizing to endure.

Just Go With It doesn’t do much to dispel that feeling.

If you saw the preview, you can pretty much write the script in your mind and be spot on with how it plays out. Danny (Sandler), a rich plastic surgeon, has his heart broken on his wedding day in the 80s (didn’t he base a whole movie on that idea ten years ago?) and decides to use his wedding ring to pick up women. He tells them stories about fake marriages, they sleep with him, he moves on to the next one. For twenty years.

That is until he runs into the lovely Palmer (Brooklyn Decker), whom he falls for without running his fake marriage game. But wait! She finds the ring in his pocket and is outraged because he’s married! Except he’s not! But he’s been telling people he is! Oh, the hijinks!

What unravels is Sandler using his assistant Katherine (Jennifer Aniston) and her kids as a fake family – a wife he’s divorcing and a pair of formulaic screwball kids that are in the mix solely to complicate his pursuit of Palmer.

I don’t want to spoil anything, but if you’ve seen any comedy in your life where someone is running a double life or hatching a scheme with a platonic friend of the opposite sex, you can probably figure out where things head.

Peppered throughout the film is the standard Sandler fare, including an over-the-top minority babysitter, a gay hairdresser, a child written to be funny who just comes across awkwardly, and a juvenile main character who eventually learns a lesson. We’ve seen it all before and frankly, seeing a forty-year-old man barking like a dog with his hand when he’s been doing it for fifteen years is kind of tiresome.

Don’t get me entirely wrong, there are some positives. Decker is surprisingly tolerable in her film debut, appearances by Nicole Kidman and Dave Matthews liven things up a little, and there are a few comedic moments. One particular scene lampoons an intense slow motion entrance, and does so with amusing results. Aside from these points though, there’s not a lot to love.

Basically you’re looking at a reasonable date movie at best. That, or something for a die-hard Adam Sandler fan, for someone who enjoys Jennifer Aniston’s films more than Brad Pitt enjoyed her company, or for someone who didn’t get enough of Brooklyn Decker in a swimsuit in Sports Illustrated.

If none of that applies to you, you’re better off just going without it. 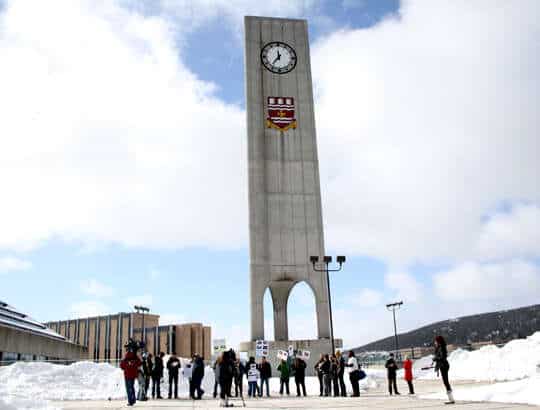 Has common sense reached its expiry date?
It seems the Canadian Food Inspection Agency would have you drive straight from Dominion to the dump