The Decemberists | Long Live the King

When American folk ensemble The Decemberists released their sixth album, The King is Dead, last January, the title was almost prophetic: following the tour for the disc, at the height of the band’s critical and commercial success, they were scheduled to take a multi-year hiatus. Us lowly subjects, dabblers in the melding of acoustic instruments and outlandish storytelling, wept in the streets.

Like any good story, just as easily as the king dies, so too is resurrection possible – long live the king. With the release of the Decemberists’ aptly titled EP, the streets were full of rejoicing again.

Long Live the King is a six-song indie acoustic collection, comprised of outtakes and demos from The King is Dead sessions. As such, the tunes have a lot in common with the previous album: a strong attention to Americana folk, the more-than-occasional esoteric lyric by Colin Meloy, and the simple likeability of the melodies, as often moody as they are uplifting.

“E. Watson”, the opening track, pulls you immediately onto a southern American plantation with Gothic overtones: “The air was painted pallid grey, the storm was coming in / Folks were lining up in all directions / Me and Holt and Henry Short were pitching on the skiff / Trying to make it home before the night.” It’s a creepy, deliciously morbid story of death, a more folksy and decidedly American version of something from The Hazards of Love – the single acoustic guitar is just background to the choral vocals.

Meanwhile, The Decemberists take a 180 degree shift on the demo recording “I4U & U4Me.” Sophistication be damned; the band doesn’t resort to pop clichés, but that doesn’t mean they have to shy away from a straightforward love song. “We are one and we are two / And we are simply wicked to a tee,” Meloy sings in his love-it-or-hate-it whine, “Never a better thing was said / Than I for you and you were made for me.”

Long Live the King isn’t a rush job, but it’s not a complete album like its predecessor was. As such, the instrument arrangements are less layered, the transition between tracks less significant, and the overall musical impact less obvious (even compared to their folk catalogue, there’s no “Crane Wife 3” or “January Hymn” here – this shouldn’t be the album to get introduced to The Decemberists). Still, as a way to cap off this phase of the band’s life, it’s a nice, concise send-off that fans will appreciate, as the bittersweet horn section of “Sonnet” fades into silence. Moreover, it’s a reminder this group of troubadours will someday be back to reclaim their throne. 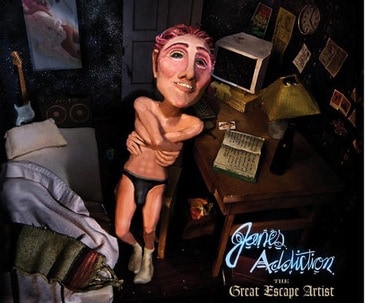 Jane’s Addiction | The Great Escape Artist
The terrific, unforgettable, rock band with the quirky sense of humour is nowhere to be seen on this...

Loner, not lonely
On the virtue of solitude