A little soft-serve for a hard world

If I were Stephen Harper right now and feeling all rejected and remorseless, I’d probably head out for some ice-cream.

While ice-cream is nice, it’s even better with company. So, in the ice-cream parlour in my imagination, Mr. Harper would be joined by some “friends.” Perhaps it would play out like this.

One scoop or two?

Rick Mercer: Hey there Prime Minister! Do I still call you that now? Whatcha ordering? Prorogies and Cream? Contempt of Parl’o’Mint?

Stephen Harper: That’s funny Rick. You know, you should do a special election version of your show. I’d appear in it. I’d even tuck you in again.

Rick’s look of unease changes to surprise as Sarah Palin walks in.

She cuts in front of them to place her order. “You there, beneath the counter, I’ll have the Grizzly Bear Mama Paw and do you have a little licorice rifle to stick in that?”

The bell on the door rings and everyone looks to see Danny Williams walk in. He smiles and shakes hands with everyone as he moves next to Mercer and Harper.

Harper squares his shoulders and gives Williams an icy (er than usual) stare.

Williams looks back and grins. “Anything but chocolate. C’mon Steve b’y, lighten up. You’ll never get your majority if you can’t have a laugh now and then. What are you having Rick?”

RM: I think I’ll get I Rant You Rant We all Rant in a cone, please.

DW: That sounds good. I’ll have the same but can you dip it in some And We’ll Roar sauce?

Elizabeth May, already on the campaign trail, comes in the side door with some Green Party branded compostable bowls and spoons. She’s smiling until she spots Palin. The radio plays the theme from “The Good, The Bad, and The Ugly.”

Smelling danger, Palin heads for the door and slips Harper her card on the way. “Remember, you don’t have to be a legitimate politician to hit the political book circuit. You can join me anytime, Hon”

May drops her bowls and chases Palin out the door shouting, “Your TLC show was crap! Don’t tell me you love Alaska, you oil digger!”

They all notice Earl Jones wandering around taking pennies out of the Leave a Penny bowl. The store clerk explains, “It’s part of his rehab. It’s sort of like white collar methadone. Just ignore him.”

Helena Guergis walks in and immediately eyes are averted and much shoe examination and shuffling happens. Quick hellos are muttered. She gets her Outer Siberia Ripple cone and leaves.

In a sing-songy voice Harper sums things up, “Awk-ward.”

SH: I really think I should pick up something for Mr. Ignatieff. Afterall, he’s calling for the election I always wanted. What flavour should I get for him?

RM: Well I should run. I’ve got John Baird on my show this week and I’m taking him to a yoga/meditation retreat. There’s no talking so hopefully he’ll be allowed to gesticulate wildly.

Everyone starts reaching for their wallets.

SH: Gentlemen, allow me to get this one.

Harper puts money on the counter, smiles and waves at everyone, and leaves.

The clerk rings everything up and takes Harper’s money. He points out that Harper miscalculated the total and is short by half.

DW: Guess we’ll be ponying up the difference again for Mr. Math.

RM: Well, in that case, I’m getting whipped cream and sprinkles on mine.

Will we ever meet again?

So everyone gets a treat and they’re all happy. But in my mind, this ice-cream shop is in a strip mall. Maybe we’ll see these folks again at a dollar store, or health food shop, or a craft supply store, or maybe even the adult video shop.

Who knows, perhaps some different people will show up. I’m pretty sure there’s an all-you-can-eat buffet in this mall. I wonder who’s in line for the roast beef. 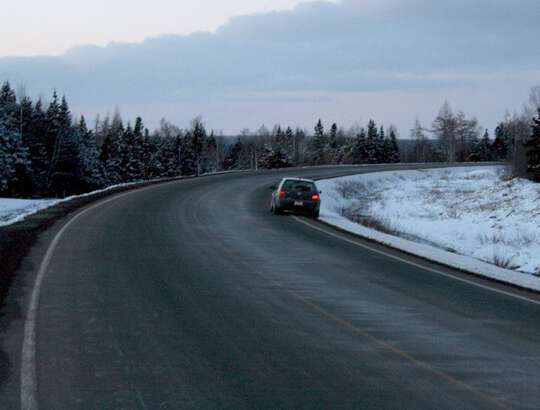 On the road
Seeking stories far away from the city