Welcome to the Dark Side

Looking out across Conception Bay, I wait for nature to inspire me. Everything’s grey and drizzly. Perfect. I love finding inspiration in dark corners and unlikely places.

Of course I have my usual sources: family, friends, and folks like Nelson Mandela and Nancy Huxter. But sometimes it’s worth making some inspirational lemonade from an abundance of lemons.

For me, the lemonade queen will always be Martha Stewart. Not only did she make a ton of loot from showing people how to iron, she also made a ton of loot in less legal ways. She got caught, did her time and somehow parlayed that into more fame and money and respect. I loved her on Oprah, at K-Mart, on her own show, in her own magazine, and in jail.

I was gobsmacked when Stewart pulled her phoenix from the flames bit and waltzed out of prison wearing a handmade poncho given to her by a fellow inmate. This triggered huge demand for the poncho pattern and a resurgence of recreational knitting. For a poncho!  Brilliant. It could only be more impressive if she’d done it with those knitted Phentex slippers with the pompoms on the toes. Let’s see Earl Jones pull that off.

Excellent source of vitamin I

Luckily, inspiration doesn’t have to be imported. Our own federal politicians are an excellent source of Vitamin I. I’ve often wanted to throw a huge bash a la “Animal House” on someone else’s dime in someone else’s home. Toronto became the proverbial vacationing parent’s living room for our government during the G20 Summit. Those rascals – bringing all their friends, rearranging the furniture, and annoying all the neighbours. So far, they haven’t had to really pay for all their shenanigans and their friends had an excellent time. Those party animals really showed us how to go big or go home. Except, of course, for the people who couldn’t get around that enormous wall and weren’t getting anywhere, let alone home.

More inspiration is just a few parliamentary seats away in the form of Peter Van Loan, Minister of International Trade. This guy is pure genius when it comes to playing hard to get. I’ve been e-mailing him and he manages to keep stringing me along by not acknowledging me. Clever tease! He sent me a flyer denouncing Jack Harris’ gun control stance and hinting at his government’s plans to control gun crime.

I was intrigued. I wanted to know more. So I wrote asking for more. But he’s not one to let me get to first base with one e-mail. No way sailor! I’m not even near the ballpark. So I asked again. But he’s holding out. He’s playing me like an accordion. Not one itty bitty morsel of controlling gun crime policy, but I’m still hanging on and writing with unrequited political interest.

Baby It’s Not Cold Outside

For me, nothing says hope like the eternal optimism of the global warming deniers. These guys always see the aerosol can as being half full. They’re just happy everything will be getting a few degrees warmer and flip flop season can be extended a few months They also make sure we don’t feel bad about our carbon emissions and excessive landfill by telling us we’re not contributing to carbon levels in the atmosphere. ‘There there, everyone, the earth would have created all this nasty stuff on its own.’

It takes some real creativity to look at shrinking ice caps and see hope… now the seals have more getaway room from those polar bears who, by the way, are increasing in numbers! Take that global warming alarmist sour pusses!

Speaking of seals … how can I not be inspired by the incredible talents of PETA? I’m always intrigued by the performing hypnotists who can make someone walk around clucking like a free-range chicken in front of an audience. PETA can do it with so many people from so many walks of life. They don’t even need to make them look into a light or count backwards from 10.

Making a point with pie

People who are completely misinformed about an issue will travel to places they have no understanding of and take an impassioned, moral stance against an industry they know nothing about. Sometimes they accentuate their point with pie. They probably also give lots of money to the very organization that bedazzled them in the first place.

If only I could wield such power over groups of people. With the Hypnotic Power of PETA I could make sure every school kid has breakfast, everyone in the world has clean drinking water, eradicate homelessness, etc. Sadly, despite their inspirational qualities, I’m sure they’d never share their secret with a Newfoundlander.

I guess I could be like Oscar Wilde and look at the stars while lying in the gutter. But sometimes a quick glance sideways finds the inspiration lying right there next to me. 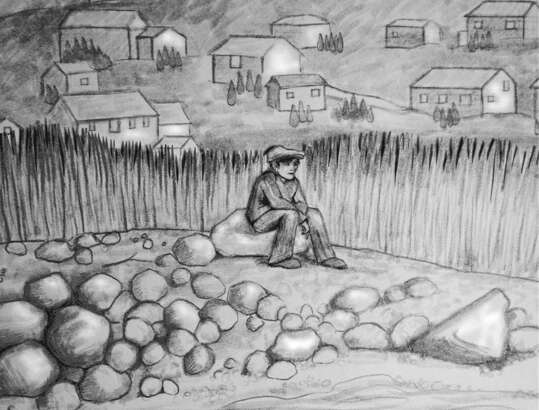 Chapter 1: The story I’ve got in me
It's time I said why I never left Hopeless Bay

You can always go home again
Local hockey talent has spent time away, but home always offers an on-ice option