Could it be because war is profitable?

Harper’s magazine, in its June issue, reports on a panel of former soldiers that it convened at the U.S. Military Academy at Westpoint, New York. They were all veterans of wars waged by the U.S. over the past 30 years, mainly in Iraq and Afghanistan, or stationed in some of the nearly 800 military bases the U.S. maintains in more than 70 countries and territories around the world.

These veterans were asked to explain why their country has been engaged in so many armed conflicts, and why, in none of them since World War II, has the outcome resulted in a decisive victory. And this despite the U.S. having the world’s best-trained and best-equipped armed forces.

The war in Afghanistan has now dragged on for 17 years, under Presidents George Bush, Bill Clinton, Barack Obama, and now Donald Trump. Obama campaigned on ending the wars in Iraq and Afghanistan, then reneged after his election; and candidate Trump, who deplored the many soldiers being “led to senseless slaughter” in Afghanistan, promptly sent an additional 4,000 troops there after he became president.

In the published excerpts from the forum hosted by Harper’s, subtitled “America’s addiction to war,” all of the six participants blamed either unjustified declarations of war in the first place, or flawed conduct and extension of the war after it was launched.

Following are a few salient quotes from that forum.

Andrew J. Bacevich: For politicians, staying (in Afghanistan) is the safer course. As long as they can make a show of supporting the troops, they are able to evade accountability.

Susan Kreps: The American experience (while fighting wars) is one of not giving up, so you don’t want to be the president who withdrew from the war. As long as these leaders are responsive to a public that doesn’t want to see us losing, we’ll just continue muddling on.

Danny Sjursen: Having an all-volunteer force creates a perfect storm. If this were a draftee army, if there were conscriptions, it would be much harder to keep the forever war going. The reason why it has been 17 years and there is still really no anti-war movement (as there was during the Vietnam war) is because the fighting is done by a small portion of Americans.

Jason Dempsey: The approval rating of the military is astronomical – really, no institution merits a 70 per cent approval rating, especially not one that’s still struggling to wrap up conflicts after 17 years. How do we explain this? Some of it is just ignorance. Americans today have no idea how the military operates, how the defense budget is spent. They just know they should respect the military.

Gregory Daddis: Adulation of the military plays a part in the enduring war. We’ve addicted our soldiers to war. The costs of being addicted – damaging their psyches, tearing families apart – are hidden until later. But there is also a class component to the all-volunteer force that we shouldn’t underrate. Young soldiers have an opportunity for social recognition that might be out of their reach elsewhere in American society. For a young man or woman of a certain class, this is an opportunity for something that is visceral. They matter in society. They are recognized. They have worth.

Sjursen: The military is also a welfare state. It is the most socialist institution we have. It provides economic stability.

Kreps: Over the past 30 years real wages in the U.S. economy have stagnated, but in the military you get a raise of 2 or 3 percent a year, and decent health care as well.

Bacevich: Let’s say no one steps in to end these wars. How likely is it, then, that the United States will be able to achieve its original aims in Iraq and Afghanistan – that both will become stable countries aligned with the United States?

Sjursen: I’m 100 per cent pessimistic. I just came from Fort Leavenworth, where they have a formula: ends equal ways plus means. But the ends we laid out are unachievable. It doesn’t matter how many ways and means you come up with. There is absolutely no chance of success as it was laid out by the Bush administration, or even in some of Obama’s rhetoric.

As interesting and revealing as this discussion at West Point certainly is, it fails to identify the main reason why the United States keeps getting embroiled in so many prolonged wars and military incursions.

The only way to find the answer to this question is to pose the ancient Roman question: Qui bono? Who benefits from perpetual warfare?

The answer — although never acknowledged by U.S. political leaders, and seldom by even the U.S. media – is the country’s military industrial complex. The big arms manufacturers profit enormously from wars and other armed conflicts. In fact, without continuous and prolonged warfare that requires the deployment of their guns, bombs, tanks, warships and submarines, they would go out of business.

The American military budget for the next fiscal year that is projected by the Trump administration is $886 billion, up from $767 billion in 2016. This massive amount is the second largest item in the country’s budget after social security. It is four times more than China’s military budget of $216 billion, and 10 times bigger than Russia’s budget of just $84.5 billion. In total, the United States spends more on “defense” than the next nine countries combined.

Who profits most from this vast expenditure on the trappings of warfare? Obviously it’s the big arms companies. It’s difficult to find out how much of the colossal U.S. military budget each of them receives. The latest figures I could find (undoubtedly not up to date) were $36 billion for Lochhead Martin, $27.6 billion for Boeing, 26.9 billion for BAE Systems, $22.5 billion for Raytheon, and $21.6 billion for General Dynamics. But there are dozens of other arms producers that are also awarded contracts. Together, they probably receive and profit from at least half, more likely two-thirds, of that huge $886 billion war bonanza.

These corporations depend on the United States being continually at war against some country somewhere – and now against terrorists everywhere. The weapons of war they produce are made to be used, not stockpiled. If world peace were ever actually to be achieved, they would be bankrupted, unless they could switch to manufacturing things that aren’t designed to kill people.

So it’s not surprising that these corporations keep beating the war drums, keep donating millions of dollars to the election campaigns of warmongering politicians – or even politicians who fear the economic collapse that could result from the closure of the country’s war plants and the consequent loss of a million or more jobs.

Few U.S. politicians today remember or take any inspiration from the “Cross of Iron” speech that President Dwight D. Eisenhower delivered in April 1963, shortly before his retirement from office. Here is a crucial excerpt from that speech:

The world in arms is not spending money alone. It is spending the sweat of its labourers, the genius of its scientists, the hopes of its children.

The cost of one heavy bomber could build modern schools in 30 or more communities, or two fine, fully equipped hospitals. We pay for a single destroyer with the money for new homes that could have housed 8,000 people.

This is not a good way of life in any true sense. Under the cloud of threatening war, it is humanity hanging from a cross of iron.

Eisenhower was a general in the Second World War who had a close view of the terrible carnage and destruction that war inflicts on its victims. It’s a sad reflection of his inability as U.S president to muster political support for peace that he had to wait for his impending retirement even to give voice to his abhorrence of war. 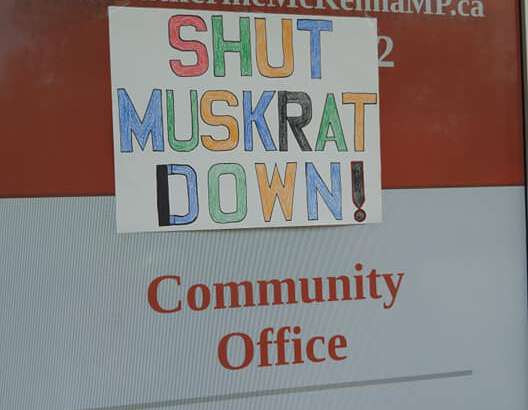 Putting a human face on the risks at Muskrat Falls: Behrens

Is the Canadian-American window a myth?