Your Vote Is Your Consent

I am talking to teenagers about consent.

In the courthouse alongside, Chantel John’s mother suffers through a slew of new charges against her daughter’s accused murderer. Newfoundland and Labrador is attempting to hold this man accountable. Though in the land of Mary March, it is difficult indeed to ignore the violent colonial locomotion that blasts through us regardless of our objection or intent.

I hike round a river named for these exploits.

It is beautiful big birch country. The water is surging fast-forward with the spring breakup in full-on yellow flop where new-wet meets rock-face. The running signage recounts a tragic tale taught to us via elementary school readers. A Beothuk woman resisting capture exposes herself to her aggressors. The courts of the day rule there was no malice in her kidnapping or her husband’s death during the abduction. Their baby died, too.

We are always told she revealed her breasts to Peyton’s party.

I stayed at a hotel named for her kidnapper and his kin. The woman at the front desk called me her love and I felt an easy familiarity. These conflicting truths live inside us. We are forced to radically accept how we got to here. Sometimes I scream the words radical acceptance into my dashboard to remind myself of this decision decided as the radio informs me of our new found follies.

We have been cyclically coerced into occupations that mentally separate us from ourselves and each other. Our collective fear of poverty, passed down from the first landing to now, has made us susceptible to powerful manipulation. Starvation is within living memory though no one wants to admit this propulsive fear. Newfoundland and Labrador has involuntarily engaged in pursuits intended to sure up security for our children but we did not consent to them.

You cannot consent under duress and we live in a survival economy chronically in crisis.

But it doesn’t have to continue like this. I reject that the way forward is the same as the way back. I do not consent to upholding a colonial system of governance that mimics the same consolidation of power our settler ancestors fled. I do not consent to mirroring the same nefarious construct of intense resource extraction that resulted in the exploitation of our First Nations and Inuit people. I do not consent to a minority of overlords lording over us all to serve their petty imperial fantasies.

I do not give my consent to that. I resist. Resist with me.

Dirty Deeds Done Dirt Cheap blasts and I hand drum the steering wheel Dad-style as I drive toward the west coast.

Dirty deeds have indeed been done. There is no debating the countless colonial narratives in the Newfoundland and Labrador textbook. They haunt us still, the television, the internet, our hearts. We are made to feel debilitating guilt and shame routinely by people wholly ignorant of our intergenerational trauma, ecological grief and ruinous toiling. Toilers was in fact how our forefathers were referred to throughout much of British, American and Canadian literature. The Newfoundland and Labrador worker amounted to little more than the labour he was physically able to contribute to the dominant machine dependent on his drudgery.

Beasts of burden they called us in their reports.

They continue to call us a great many things meant to dehumanize, dismiss and silence.

This too is by design of course. I have been called a great number of things meant to make me feel less than by the name-sayer. I am a rural-remote, northern, female, artist of mixed ancestry. The girl child of a fisherman and a nurse. I was not born into privilege and so my access to power is limited as is that of the majority of Newfoundlanders and Labradorians. Individually we are meant to have little power and so we are made across the land to feel individual. But we are a collective.

Democracy is fair and free elections. This is barely that.

I want accountability now. I am demanding accountability the likes of which we’ve not seen in the whole of our provincial history. I am not suggesting we upset the applecart. I am suggesting we toss the jesus thing in the ditch and set it on fire. Besides, burning the oppressor’s shit is a part of our shared heritage. Let’s set this colonial train figuratively ablaze before it delivers us to bloody conflict. If history has taught us nothing, it has taught us that the only prescribed outcome to vulgar inequality is war. It is your children they will feed to the future war machine just as it was your great-grandfathers they fed to the last. Do you trust them not to? Do you trust them at all? I don’t.

No one man gets the crown. No one man deserves the kingdom.

Hold them to account. Split the vote. Demand a minority coalition government.

And call her Demasduit. She did not consent to being called by another name. She could not consent to that under those conditions. It doesn’t matter if she exposed herself. It is irrelevant. We should call her by her real name. We should respect each other’s right to self-determination.

Playwright and author Megan Gail Coles is touring NL with her TYA play Squawk and her debut novel, Small Game Hunting at the Local Coward Gun Club. Follow her on Twitter. Read the first part of this series here.

Oil is On the Way Out, but NL is Going All-In 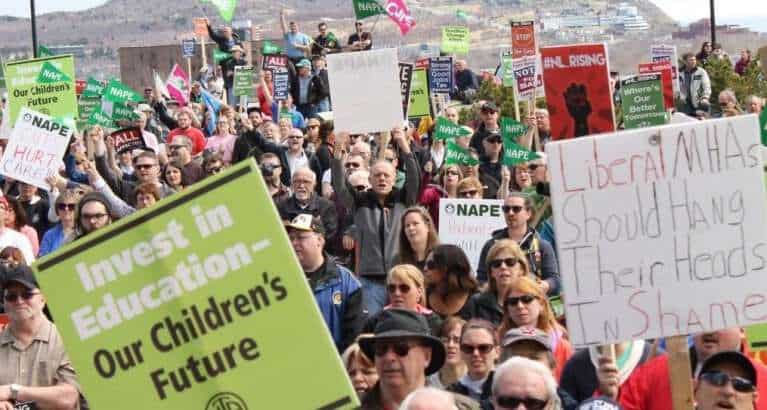