If you love discovering new music from many places and across multiple genres, this annual springtime event in St. John’s is your thing. Mark your calendars and book time off work now so you don’t have to use your sick days: April 24-27, 2014.

It’s mid-April and Spring is in the air in St. John’s. College and university students are done exams. Slush and salt have given way to mud and muck. Mother Nature does what the City can’t, or won’t, and clears the sidewalks herself. Elders and people with disabilities can now emerge from their homes and move around, dodging the exposed landmines left by free-spirited dog owners and their BFFs. Sunny weekend days bring smiling faces downtown to wander up and down Water Street. Oh, and it’s Lawnya Vawnya Eve.

Inaugurated in 2011 as a multi-day showcase of music, art and do-it-yourself (DIY) culture, Lawnya Vawnya (if you haven’t already heard, plucked from the Dictionary of Newfoundland English, the word means: “a good time at a dance or party; plenty to eat”) has effectively filled a void in the capital city’s music and arts scene by bringing exciting independent artists from Canada to the Island, introducing them all to each other and to the local artists, putting them up with billets during their stay, and immersing them in a festival catered as much to the artists as it is to the fans.

The Lawnya Vawnya Four have big boots to fill but are already proving they have, uh…big feet. In opening up 25 per cent of the festival roster to applicants, they’ve given themselves the opportunity to discover some new artists and their music at the point of assembling the event roster. According to Power—himself a local songwriter and frontman of indie folk band Pilot to Bombardier—the decision to let artists apply to join the festival resulted in about 80 applications coming in, with some flattering results (The Burning Hell, Nick Ferrio & His Feelings, local band Green & Gold and festival headliner By Divine Right all came through in the application process) and an opportunity to discover some great new music.

“We didn’t want to rely on the bands we’ve been listening to, and the bands that played Sappyfest last year or Halifax Pop Explosion. We wanted to really see what else was out there, and some really interesting stuff came from that.”

The directors compiled an “A List” of artists (“just shoot for the stars and see who you might possibly get”), Power explains, and from that list were able to snag 2009 Polaris Music Prize winners Fucked Up and Toronto indie-pop duo Snowblink. “[Fucked Up] have never been to Newfoundland and they’ve always been on our radar for bands to see, they’re a great socially and politically-minded band, they play great music,” says Power. “They’ve got a brand new album coming out right around the time of the festival too. So it’s really exciting that we got them.”

The contingent of local artists on the bill include Green & Gold, Steve Maloney and the Wandering Kind—who just released their debut album in March—Fog Lake, Monsterbator and Mr. Supper. The festival will also see the return of a couple former popular St. John’s band leaders. Jon Hynes, who fronted popular local rock band Trailer Camp, will return from Ontario to perform a solo show at Thurday’s opening night gig at Rocket Room alongside Snowblink and Peter Lannon. And former Human Soundtrack lead singer Steve Haley will make his way back from Sackville, N.B. with his new band, Banded Stilts.

Kom and Sharratt will also return to St. John’s to reunite with their Island-dwelling Burning Hell band mates for what will no doubt be a highly anticipated show. “I’m really excited to come back for the festival this year as a performer and experience Lawnya Vawnya from that side,” Kom recently told Landwash. “I think the new team has been doing a great job and I’m looking forward to seeing what they do with it.”

The festival will see performances spread out across downtown St. John’s Thursday thru Sunday, but organizers will also take one of Lawnya Vawnya’s staple events, the free weekend music crawl, out to Quidi Vidi Village on the Sunday. Aspiring concert photographers can meet at the Quidi Vidi Plantation at 1 p.m., an hour before the crawl, and get a crash course on how to snap amazing photos of their favourite bands. The workshop is free and will be led by Jill Wilcott and veteran music and TheIndependent.ca photographer (and Landwash graphic designer) Graham Kennedy.

Other events—all at Eastern Edge Art Gallery—include panel discussions on Friday and Saturday. On Friday TheIndependent.ca Editor Justin Brake (that’s me), Keep Station Radio founder Justin Davis and The Overcast editor/publisher Chad Pelley will discuss independent media in Newfoundland and Labrador. On the Saturday panel musicians Joanna Barker (Green & Gold), Mathias Kom (The Burning Hell) and Sandy Miranda (Fucked Up), and MusicNL’s Jen Winsor, will share some of the ins and outs of being a touring musician and making it work. Eastern Edge will also host the festival’s record and press fair on the Saturday and Sunday of the festival, and from April 19 to May 9, Fog Prints, an expo of music poster art by local artists.

“There’s not one show of the entire festival that we think is weak, and that’s honest,” Power says, asked if he and the new LV crew felt they had curated a lineup on par with the first three years. “There’s nothing weak about any of the shows.”

Lawnya Vawnya runs April 24-27 at various venues throughout downtown St. John’s. Some events are all-ages, some are free to the public, and festival wristbands are $60 until April 11, $80 after that. For a full event listing and to stay up to date on all things Lawnya Vawnya, ‘Like’ the festival on Facebook, visit www.lawnyavawnya.com or call Power at home anytime before 6 a.m. 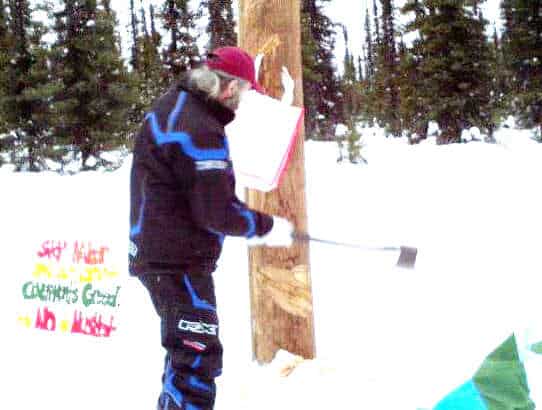